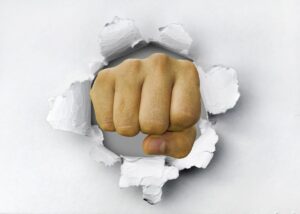 Early in my writing career I noticed something happening when I got to around the 30k word mark in a manuscript. It was like I hit a wall. It’s not that I didn’t have ideas or know the direction of my plot. It was just a strange feeling like I wasn’t sure what to write next. I’d look ahead at the 60k or more words I had to write, and got the heebie-jeebies. What the heck was going on?

Luckily, I found out I wasn’t alone. Lawrence Block reported the same thing in his book Writing the Novel:

One thing I’ve come to recognize is that I tend to run into a wall at a certain point in all of my books…. I find myself losing confidence in the book—or, more precisely, in my ability to make it work. The plot seems to be either too simple and straightforward to hold the reader’s interest or too complicated to be neatly resolved. I find myself worrying that there’s not enough action, that the lead’s situation is not sufficiently desperate, that the book has been struck boring while my attention was directed elsewhere.

I got to thinking about “the wall” again while reading Kris’s post on settings and Game of Thrones. It put me in mind of the current plight of author George R. R. Martin. Now, I’m not an epic fantasy reader. I’ve never made it past the halfway point of The Fellowship of the Ring (stop with the singing already!) But I am definitely an admirer of those writers who excel at the genre. Especially Martin, whose page count and popularity I look at with awe. He is, at the moment, in the midst of a long patch of writer’s delay involving the next book in his series. Last year, he talked about it:

I know there are a lot of people out there who are very angry with me that Winds of Winter isn’t finished. And I’m mad about that myself. I wished I finished it four years ago. I wished it was finished now. But it’s not. And I’ve had dark nights of the soul where I’ve pounded my head against the keyboard and said, “God, will I ever finish this? The show is going further and further forward and I’m falling further and further behind. What the hell is happening here?”

This sounds like the wall and is completely understandable in light of the complexity of the books, not to mention the TV series running ahead of him!

Patrick Rothfuss, another popular fantasy writer, has also been in the midst of a very public delay for the third novel in his Kingkiller Chronicle (the second book was published back in 2011). Fans have expressed their displeasure—some going way over the line.

In an interview Rothfuss said something interesting:

“But I am moving forward. More importantly, I’m finally getting my life sorted out so that I can go back and approach my writing and my craft with the joy that I used to feel back in the day, when I was just an idiot kid playing D&D or working on my unpublishable fantasy novel.”

I think most of us can relate to that. When we first sat down to write a novel, we felt the joy of creation, the pure fun of making stuff up (see Jordan’s post on the “fun mojo” of writing). We shouted Huzzah! when we typed The End (or something that sounded like Huzzah. Maybe it was just Whew.)

But then we got the stunning news that what we had written didn’t work. We had to figure out why. We had to learn the craft. We had to work.

Then some of us got contracts and had to finish books with the cold, merciless wind of deadlines blowing across the backs of our necks. That chill was even more ominous if we found ourselves at a wall in our manuscript. So I developed some strategies to prepare for that dreaded moment.

At 20k the foundation of my novel had better be strong. There’s a whole lot of words to write, characters to flesh out, plot twists to justify. So I stop around 20k to assess my plot:

A. Is my Lead compelling enough? Will readers care about his plight? Is he likable? Does he have qualities with which readers can empathize?

B. Are the stakes death (physical, professional, or psychological)? What can I do to ramp up the stakes?

C. Has my Lead been truly forced through the Doorway of No Return (when the book plunges into Act 2)? [Note: if your Lead isn’t forced into Act 2 by the 20% mark of your novel, the readers will feel it dragging.]

D. Do I have enough of an orchestrated cast? Do my secondary and minor characters have enough uniqueness about them? Are they sufficiently in conflict with other characters?

I’ve quoted this before, but it bears repeating. This is from a 1919 text on fiction writing by a man named Clayton Meeker Hamilton:

In the great story-tellers, there is a sort of self-enjoyment in the exercise of the sense of narrative; and this, by sheer contagion, communicates enjoyment to the reader. Perhaps it may be called (by analogy with the familiar phrase, “the joy of living”) the joy of telling tales. The joy of telling tales which shines through Treasure Island is perhaps the main reason for the continued popularity of the story. The author is having such a good time in telling his tale that he gives us necessarily a good time in reading it. (A Manual of the Art of Fiction)

“For the first thing a writer should be is––excited,” writes Ray Bradbury in Zen in the Art of Writing. “He should be a thing of fevers and enthusiasms. Without such vigor, he might as well be out picking peaches or digging ditches; God knows it’d be better for his health.”

Finding—and keeping—the joy in your book is thus absolutely essential, not just to break through the wall, but to elevate the entire thing. For me that means:

A. Going deeper into characters. This is a source of originality and interest. Giving even a little bit of backstory to minor characters creates all sorts of possibilities. You’re more likely to feel joyful when your novel teems with the possible coming out of characters.

B. Make things even harder for the Lead! Stop being so nice. Keep asking: what could make things worse? Oh, yeah? How about worse than that?

C. Keep a novel journal. This not only keeps you in the story; you can look back at early entries to recapture what got you hooked in the first place.

If you’re still feeling hampered or unsure at the wall, get a long pole, back up fifty yards, then run like mad and vault right over the thing. Land a few scenes ahead. Pick the future scene you’re most excited about writing. Then write it!

Now, turn around and look backward. You should be able to plot a way to get from the wall to the scene you just wrote.

So what about you? Do you ever hit a wall in your writing? How do you deal with it?

32 thoughts on “When Writers Hit The Wall”