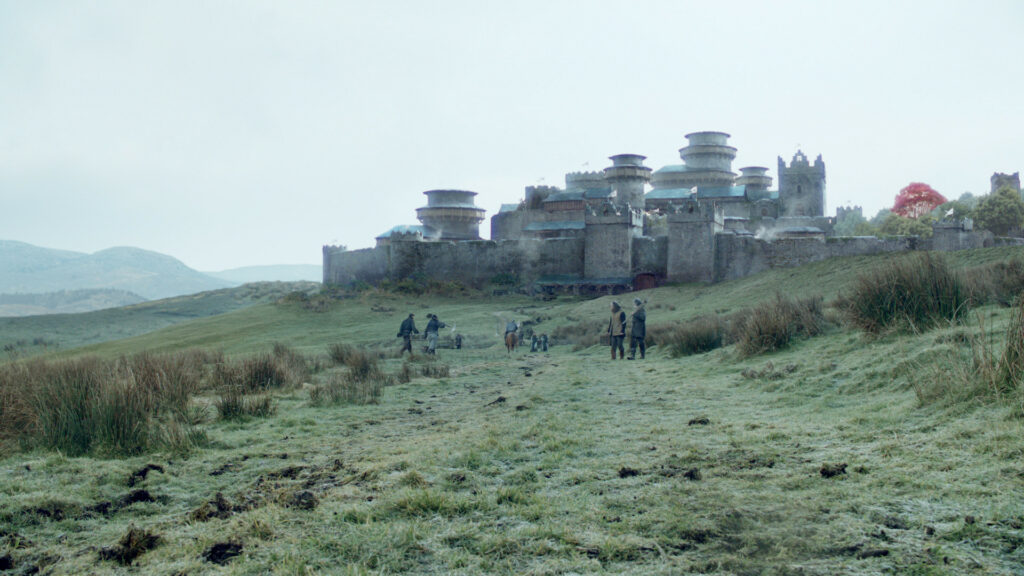 Winterfell from Game of Thrones

A novel doesn’t begin to glow until its setting comes to be accepted as true. — Eudora Welty.

I am bingeing on Game of Thrones. I know, I know…I’m the last one to the ceremonial beheading. But that’s the way I roll these days with television. I’m in season six, about halfway through. SO! Don’t any of you DARE include any spoilers in your comments or I will hunt you down and run a Valyrian Longclaw sword up your gut.

Now, I didn’t read any of George R.R. Martin’s books, but a writer friend of mine read them all, and he tells me he has learned a lot from analyzing how Martin sets up his characters and builds his worlds in just a few pages. Martin made his chops as a short story writer before hitting it big with A Song of Ice and Fire, so that tells you something there. And if you watch GOT, you get whiplash from trying to keep everyone — and every place — straight. There’s even a Game of Thrones For Dummies.

Sometimes, the internecine family story lines feel disjointed and the subplots suffer from kitchen-sink syndrome. I had planned to write today’s blog about what happens when you have too many subplots — as GOT often does — but I couldn’t get my brain wrapped around it. Besides, James already wrote a good post on that years back — click here.

I want to talk, instead, about GOT’s sense of place. It’s pretty darn amazing. I’m not a  fantasy-phile. (Although I really do have a mad crush on King Arthur). But I have totally bought into the world GOT lays out.  The world feels vaguely medieval  British-Isles-centric, with seven warring kingdoms with knights, ladies, eunuchs, whores, and more rolling royal heads than you can shake a broadsword it. But it’s also got dashikis, deserts, and dragons, oh my.

And don’t even get me started on the blue-eyed zombies living out there beyond The Wall as everyone cryptically mumbles that “winter is coming.”

A short digression: I love great opening TV credits, especially the ones that act as intros to the episode. (Six Feet Under might be my favorite.) The opening of Game Of Thrones is brilliant, not just for its dark throbbing cello score, but because it underscores how important PLACE is in the story. In his piece for Thor.com, analyzing GOT’s sense of place, Brad Kane points out that the opening shows each of the warring kingdoms popping up in a whirring montage of mechanical gears and castles. They are game pieces on a world map (read chessboard).  There, in mere seconds, the complex, conjured world is literally built before your eyes — and if you’re clever, you’ll catch imbedded clues of what’s to come in the plot.

Even if you’re not a GOT fan, go watch the opening for a second to see what I mean:

Sense of place is dear to me. I love books that have it.  I try to write books that honor it. I never start a new book until I can see the world where it takes place.  This has meant actual traveling, down into the Paris catacombs, through San Francisco’s dive bars and the Florida Everglades and up to the farthest tip of Michigan’s Upper Peninsula. It has meant cyber traveling into ruined Scottish castles, British police stations, and into the dark tunnels below abandoned mental asylums. It also meant one really long Google Street View ride across America on I-80 from New Jersey to Oakland California.

All because I had to see it to make you believe it.

Eudora Welty understood the importance of world building. In her essay “Place in Fiction,” she argues that a sense of place is as important as character or plot or symbolic meaning. She tells of how she was struggling with her short story “No Place For You, My Love” — until she took a trip.

“What changed my story was a road trip with a friend down south of New Orleans to see that country for the first (and so far, only) time. When I got back home, full of the landscape I’d seen, I realized that without being aware of it at the time, I had treated the story to my ride, and it had come into my head in an altogether new form.”

“Full of the landscape I’d seen.”  What a great turn of phrase.

But Welty is full of such wisdom. She says the primary responsibility of the writer is to “establishing a chink-proof world of appearance.” Couldn’t help but think of Game of Thrones after reading that line.

Which, at risk of turning off you non-GOTers, I must now return to.  If you read the books or watch the series, you will understand immediately what I mean when I praise GOT’s world building power.  If you’re not a fan, I’ll let Brad Kane explain it. Martin and the TV series create three distinct and disparate worlds — and they have nothing in common. But, as Kane points out:

Yet they are all part of the same story. And that’s the genius of George RR Martin. You’d never confuse the barren lands of Winterfell with the towering peaks of the Vale. You’d never mix up the volcanic crag of Dragonstone with the dangerous shores of Great Wyk. Every story world in Westeros and Essos feels visually, culturally, and thematically distinct—and yet it all ultimately fits together.

He accomplishes this through close attention to detail. You may have read fantasy books where nations are defined as “the people who build ships,” or the “folks who smoke the good tobacco.” Not so in Game of Thrones. The world of the Starks is very different from the world of the Lannisters, which is very different again from the worlds of the Targaryens or the Greyjoys. Local attitudes, ways of speech, tools of war, sexual mores—they all change radically from country to country.

The telling details. Specifics. Verisimilitude. That is what goes into the best fictional world building. It doesn’t matter if the world you’re building is as small as a rural Virginia police station, or as grand as a ninth century Venetian dukedom. Our jobs as novelists is to make that Virginia cop shop sound, smell, feel, look, like no other place on earth. Our jobs as novelists is to make the long forgotten world of the Venetian doge feel, smell, look and sound as fresh and believable — nay, relate-able — as our own neighborhood of today.

If you make the place come alive in your readers’ minds — if you make them feel it with all their senses — they will follow you to the ends of the earth.

Or at least as far as Winterfell.

22 thoughts on “A Sense of Place:
We’re Lost Without It”