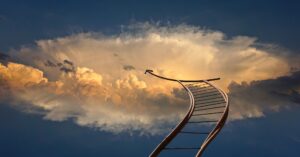 I’m going to assume arguendo (every now and then I trot out my legalese, especially if it’s Latin, because it makes me sound so authoritative) that you want to be in the writing game for the long haul. Further assumption: you would like your fiction to create a river—or at least a stream—of income. You nod your head in agreement with blogmate Laura Benedict when she describes success as, “I’m still here. Readers still read my stories—often paying for them—and I still write them.”

There used to be only one way to go about this: get a contract from a publishing house and sell enough books so you get another contract.

Now, of course, there is the viable alternative called indie publishing.

Jane Friedman recently interviewed two literary agents on the topic of establishing a career as a traditionally-published author. Two takeaways:

1. Many writers crave a large advance for a first novel.

2. That may not be a good thing to crave:

Maybe that big-advance book doesn’t get as many pre-sales as the publisher wanted, or gets mediocre reviews, or underperforms in its first quarter. A publisher at that point might re-strategize, or they might cut their losses, and the author ends up never earning out that big advance. That can hurt in the long-term. When it comes time to sell the next book, a publisher may use those figures against them by offering a lower advance or passing entirely. Publishers want to see that an author will make them money.

Thus, a modest advance is not a bad thing:

Depending on the publisher’s budget, the house might want to keep the advance lower to give the author an opportunity to earn out and also apply some of those funds to marketing. The biggest advantage to a smaller advance is that it’s easier to earn out. If your first book/contract earns out, that gives you a much better chance at a second contract.

But what if you fall well short of earning out? The publishing world is littered with the bleached bones of careers that didn’t make enough green for the house and were cast outside the gates of the Forbidden City.

Now, of course, dem bones can get up and walk around (now hear the word of the Lord) via indie publishing. If these authors can get the rights back to their published books, so much the better. [Though publishers have wised up to the asset value of backlists. So get wise yourself, trad authors: huddle with your agent and negotiate a realistic reversion clause tied to a minimum of royalty income.]

My advice for authors seeking a long-term traditional career is as follows:

My advice for authors seeking a long-term independent career:

Finally, for all writers looking to make this gig a career: be patient and resilient. Success rarely happens right out of the gate. It takes years to get established. Setbacks are more frequent than bestsellers. But the only true defeat happens when you stop writing.

Other advice is welcome in the comments.

10 thoughts on “How to Build a Long-Term Writing Career”