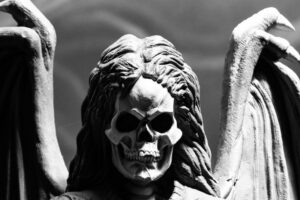 (This will be a short post today as I am hosting the most adorable granddaughter who ever walked the face of the earth and her friend for a sleepover. Pizza Hut stock may go up a point or two. I will still be answering comments though I may be somewhat late in doing so. Thank you.)

Regular visitors to TKZ on alternate Saturdays are probably aware that I am somewhat dream-conscious. I’ve written here and there about dreams inspiring my writing. They do more than that, however. Occasionally they scare me. Badly.

I had an extremely frightening one this morning. The duration in dream time was extremely short. The entire dream consisted of me opening my front door to find the Angel of Death standing there. No “Hey-how-are-ya,” no “Are you making as much money as you wish you were?” or “Would you be interested in selling your home?”… no nothing. It just filled the doorway and I was swallowed up in blackness. Badda-bing-bang-boom! I woke up shouting, and, of course, couldn’t get back to sleep. I may not be answering the door for a few days. Or weeks. Maybe not until after Halloween.

The flip side of this concerns my favorite commercial of all time. It ran on MTV for a while in the late 1980s. Death played a prominent role. Even if you never watched a second of MTV or any music video you might almost certainly appreciate how clever it is/was so I have ever so thoughtfully included it here.

So…what has been the most recent dream that you have been able to recall? Do any of your dreams bother you? Have they ever come true? Have you used one or more for inspiration? Jack Kerouac made an entire book out of his. Please share if you are so inclined, and thank you as always for stopping by.

21 thoughts on “Perchance to Dream”