Happy Valentine’s Day. You did remember the one you love, didn’t you? If not, finish this blog, then rush out and find something for your special someone.
Today another Brave Author, known as BA, sent in a First Page Critique. Take a look, and then we’ll talk about it. – Elaine Viets 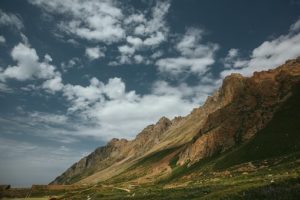 Seven-year-old Aliya Nizova darted through the trees, her little horsehair-trimmed boots slipping on the carpet of wet pine needles, heart pounding in her chest.
Her breath rasped in her throat as she ran, desperately seeking someplace to hide. She came to a stop at the edge of a clearing and looked around. To the right, a gray granite boulder jutted from the ground, a rime of dirty snow clinging to its base. To the left, the mucky soil sloped down to a cluster of tangled berry bushes.
A not-so-distant shout filtered through the dark forest. She made her decision and moved to the left. Cold mud squelched under her boots as she knelt behind one of the bushes.
She waited, ears keen to pick up any sign of her pursuer.
Aliya heard a thump.
Unlike the shouts, the strange noise had come from nearby.
It had sounded a little like a heavy pinecone hitting the ground, she thought. She craned her neck to look around at the nearby trees. But none of them had cones dangling from their branches.
A second thump.
The sound was followed by a strange scuffling noise.
Then silence.
Jumping to her feet, she stepped out from the bushes and back into the clearing. At first, she saw nothing but tea-colored earth and gray-green sedge grass. The breeze picked up, cutting and cold.
Aliya skipped back a step as more thumps sounded next to her, one-two-three, like rifle bullets burying themselves in the earth. The clouds parted, allowing a thin shaft of sunlight to bathe the clearing in golden light. They were all around her.
Small, broken black shapes.
The ground was littered with the bodies of carrion crows. Their heavy beaks and ebony plumage glistened as they lay sprawled on the ground, necks broken and wings shattered They’d fallen from the sky as if expiring in mid-flight. 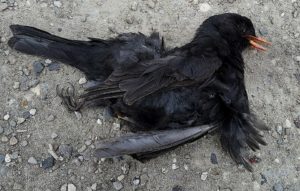 Even at seven years old, Aliya knew enough about the world to think: Something’s wrong here.
One of the dark shapes moved. The bird’s wings fluttered, beating against the ground with a scuffling sound before going still. She knelt next to it, absently grabbing a slender twig in one hand. She gave it a gentle poke in its side.
No reaction. She poked it again.
The crow’s head whipped around as it struck with a convulsive snap. 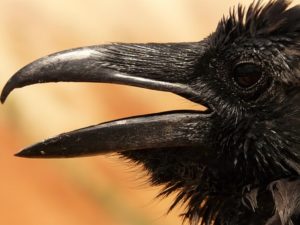 Elaine’s Comments: This pandemic medical thriller has a good, creepy opening. It’s well-paced and the writing is energetic. But I have some questions:
– Who is the little girl running from?
All we know is he or she is described as “her pursuer.”
– Why is she running?
Since this is a medical thriller, is she trying to escape from someone who wants to use her in a medical experiment? Or is there another reason: she’s the only survivor in her family or village? Or is her pursuer not related to the medical crisis: is the pursuer a soldier? Let us know. It’s distracting to have this unsolved question.
The second sentence would be a good place to give us an answer:
“Her breath rasped in her throat as she ran, desperately seeking someplace to hide” from the white-coated scientist who wanted to take her away. Or from the soldiers who killed her family. You get the idea, BA.
Where are her parents?
Are they dead, in hiding, or have they been taken away?
A misplaced sentence.
“They were all around her” does not work where it is. I’d make a new paragraph, start it like this:
They were all around her: small, broken black shapes.
Describe Aliya for us more.
Her “little horsehair-trimmed boots” is a nice touch. The dead crows hitting the ground sound like “rifle bullets burying themselves in the earth.” That phrase tells us a lot about Aliya. How many seven-year-olds know how rifle bullets sound? A clever hint. But is the girl big or small for a seven-year-old? Dark-haired or blonde? A phrase or two can answer these questions.
The ending scene with the crow is a good one.
There’s much to love here, BA.
What do you think, TKZers?