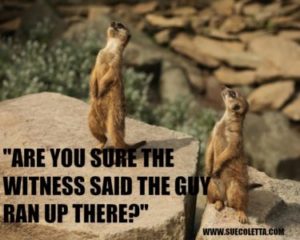 As promised, let’s continue with false or misleading eyewitness testimony, and how writers can use interview techniques to our advantage. Today, we’ll change it up a bit by focusing on how to question an eyewitness. More importantly, how not to.

The context in which a question is asked becomes an important factor. A witness, however innocent, may try to answer the investigator’s questions by telling him/her what s/he wants to hear, not to confuse the investigation but because it’s human nature to want to help. Add a leading or suggestive question on top of that mindset, and most of what the investigator receives will be unreliable information. Incidentally, children and mentally challenged individuals, including folks with borderline IQ’s, are the most easily influenced, because they tend to want to please adults.

Leading questions suggest the response is expected and/or implies information the witness has no prior knowledge of. Let’s say the investigator asks, “How hard did the robber punch the victim?” Most witnesses will try to fill in the blanks, even if they never actually witnessed physical contact between the victim and suspect. This results in guesswork on the part of the eyewitness. Therefore, it’s imperative that the investigator doesn’t inadvertently suggest an answer.

Suggestibility is defined as: “The act or process of impressing something — an idea, attitude, or desired result — on the mind of another.”

With that in mind, the detective should keep the testimony as uncontaminated as possible. Part of the problem is, it’s difficult for eyewitnesses to distinguish between information they saw during the event from information they heard from other witnesses, after the event—also called “post-event information.”

In one study, Loftus and Palmer investigated the ability of post-event information to influence the eyewitness testimony. Participants were shown a video of a motor vehicle accident. Afterward, researchers asked several questions with a variety of phrasings. In the spirit of brevity, I’ll only mention two.

“How fast were the cars going when they smashed into each other?”

“How fast were the cars going when they bumped into each other?”

The participants who were asked the first question, reported high rates of speed and broken headlights, even though broken glass wasn’t shown in the video. The second group reported lesser speeds with very little damage to either vehicle. It’s easy to see why. Verbs matter, but we knew that already, didn’t we? 🙂

Open questions seek an open-ended response from eyewitnesses. They also don’t limit the scope or direct the witness to answer in a certain way. “What happened?” Or, “What did you see?” are both examples of open questions.

With open questions the detective is more likely to get a true recounting of events. A study showed responses to open questions were three-to-four times longer and three times richer in relevant details.

Facilitators are non-suggestive verbal or non-verbal responses that encourage the eyewitness to continue recalling the events. For example, “Okay.” Or, “Uh-ha.” Or, “Hmm.” Because these responses are non-leading and non-specific, they’re effective at maintaining the eyewitness’ narrative without decreasing the accuracy of their statement.

Focused questions are exactly as they sound. Usually they’re open-ended so as not to taint the testimony. “Tell me what the man looked like.” As long as the eyewitness mentioned “the man” in his or her initial statement, the detective won’t risk muddying the response. A focused question is used to further support the testimony that’s already been given, which aids in garnering more useful details. However, if they’re overused by the detective, they can actually have the opposite effect, thereby limiting the accuracy of the eyewitness testimony. Especially if the witness feels obligated to provide details.

Would questioning differ with a suspect vs. witness?

It shouldn’t, unless the detective wants to skew the facts by forcing an involuntary confession. We’ll dig into the difference between voluntary and involuntary confessions next time. Why innocent people confess is a fascinating subject. In the meantime, the perfect example of real detectives asking leading and suggestive questions occurred in the interview of Brendan Dassey, featured in Part II of Making a Murderer on Netflix. If you haven’t watched the second season, take a peek. Whether or not you believe the confession was coerced is irrelevant for our purpose. Watch the interview through a writer’s eye.

In thrillers and mysteries, if we play with interview techniques, we buy time. Need to send your law enforcement character down a dead-end? Have a newly-minted detective ask leading or suggestive questions outside the lead investigator’s presence. Once the new scenario is planted in the eyewitness’ mind, they’re testimony will be of little value.

So, my beloved TKZers, what are other ways to play with interview techniques? Fire up those writer brains and lay out some scenarios. Bonus points if you can name a thriller where false or misleading eyewitness statements led to the investigation of an innocent (wo)man.

17 thoughts on “Questioning an Eyewitness: To Lead or Not to Lead?”