Read a heck of a story this weekend. It featured a flawed hero on a classic journey. He started out young with the world at his feet, but then he lost it all. The story had villains, a dysfunctional family, a bad love affair, a sordid scandal, and physical hardship.  The hero, I feared, was doomed. But then, against all odds, defying the naysayers, he climbed out of the abyss and triumphed.

Okay, I didn’t really read it. I watched it.  But it had all the human drama and suspense of a great book.

I watched Tiger Woods win the Fed-Ex Cup tournament. It was his first win in five years.  As one of the golf commentators said, “What a great story.”

Maybe you don’t follow golf. I don’t, normally. But the story of Tiger Woods, who had it all, lost it all, and climbed back up again, is the same stuff that makes for compelling fiction.

Let’s stay with the sports metaphor for a second. Let’s talk about pro football — it’s my go-to sport. Pro football’s ratings are way down. There are lots of theories why — the players’ protests and the President’s tweet-poking; bad play from big market teams like the Cowboys and Bears; too many dog games on Monday Night Football; fewer folks (mainly young) watching TV and choosing to cut the cable cord all together and play with their phones.

I’ll add my own theory: Pro football doesn’t have any great stories anymore. Like…

The Patriots’ season going to hell when Drew Bledsoe went down. Until some sixth-rounder nobody named Tom Brady stepped in to save the day.

The 1972 Dolphins losing their starting QB but going on to the only perfect season.

The 1985 rock-star Bears march to another perfect season, only to be blocked in game 13 by the 8-4 Miami Dolphins, hell-bent on preserving the old record.

Some guy named Marino breaking every record but never winning the Big One. Kurt Warner, the grocery store clerk who became a three-time MVP. And guys like Michael Oher, the homeless kid whose rise to Titan tackle was told in the Sandra Bullock movie The Blind Side.

We’re all suckers for great stories. Cinderella tales. Redemption roads. Inspiring comebacks. Underdogs who triumph. It’s the essence of good fiction. I got to thinking about this today after reading James’s Sunday blog about “pretty writing” as Tiger played in the background on TV.

You want to be a success in this business? Just learn to tell a good story.

Ha! Easier said than done. Let’s break it down into digestible bites. A while back, I wrote a blog about Pixar’s 20 Rules of Great Storytelling.  Pixar knows how to tell great stories. They’ve won 13 Academy Awards, 9 Golden Globes, and 11 Grammys. Pixar movies always involve a deep understanding of human emotion. They know how to move an audience. Here are just a couple of their “rules.”

Great stories are always universal. Take the basic ingredients of human life — birth, love, death, conflict, growth, spirituality — and make it appeal to everyone. Or as Pixar director Pete Docter puts it:

“You write about an event in your life that made you feel some particular way. And what you’re trying to do, when you tell a story, is to get the audience to have that same feeling.”

Great stories always have someone to root for. It can be a classic underdog tale. Or a rags-to-riches saga. The hero may not succeed, but often we love their attempt alone. It’s more about their journey than the destination.

Great stories always have structure. One of Pixar’s tips is to use “The Story Spine,” a formula created by professional playwright Kenn Adams. It goes:

Once upon a time there was [blank]. Every day, [blank]. One day [blank]. Because of that, [blank]. Until finally [blank].

Can you see the beautiful simplicity of it? You have a hero, who does this every day. But then something happens until finally he triumphs. Or as we at TKZ preach often: Something is disturbed in your hero’s world and he fixes it. (Or sometimes doesn’t).

Great stories are never dull. Again, go back and read James’s Sunday post for more on this. Great stories are surprising, unexpected. If you can dream up a story that challenges the reader’s usual perceptions of reality, you are on to something good. This is especially true in genre fiction, where stale old formulas are too often the norm. A tip from Pixar: If you’re stuck on coming up with something truly unique, get rid of the 1st thing that comes to mind — and then the 2nd, 3rd, 4th, and 5th.

Well, it’s just after six p.m. on this Sunday as I write this. Tiger Woods just won.  But not without some last-minute drama.  Going into the last round today, he was up five on his nearest competitor, Justin Rose. Tiger’s drives were straight and true, one going the length of three-and-a-half football fields. His putting game was surreal.  But then… 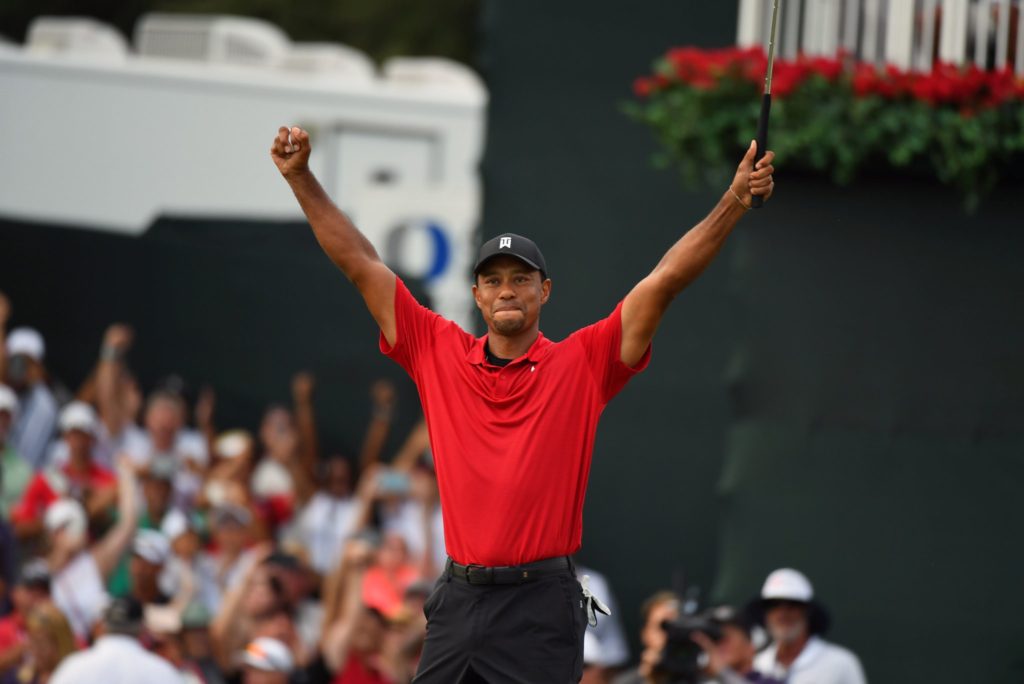 On the back nine, he shanked a couple into the rough. He missed easy putts. He bogied the fifteen and sixteen holes. Justin Rose crept closer, the lead shrinking to two. But Tiger parred the last two holes to win.  So here’s what we have: Tiger Woods, a deeply flawed protagonist, had it all and lost it all. He spent five years wandering in the wilderness. One year ago, Woods had endured three back surgeries and could barely walk, let alone swing a club. One year ago, he was ranked 1,199 in the world. Today he clawed back to win his first tournament in five years and maybe move up into the top ten.

He’s being interviewed right now. The crowd is going nuts. Tiger is tearing up. So am I.

What a great story. 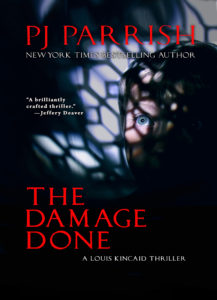 THE DAMAGE DONE, the 13th installment in the Louis Kincaid series, now available.

“Louis Kincaid is wearing a badge again—as part of an elite homicide squad. But his return to his Michigan home comes at the bidding of a man who once set out to destroy him. When the cold case deaths of two little boys collides with the white-hot murder of a mega-church minister, Louis finds himself fighting to unearth the secret past of his police captain—and the demons of his own childhood. The past and present come into stunning focus in this brilliantly crafted thriller. Relentlessly plotted yet filled with poignant family emotion, it will grip you from start to finish.”
—Jeffery Deaver.