“There is a muse, but he’s not going to come fluttering down into your writing room and scatter creative fairy-dust all over your typewriter or computer.”

The Ancient Greeks believed there were goddesses or muses who were the sources of knowledge and inspiration for the creative arts. From Calliope and Errato in poetry to Melpomene (tragedy) and Thalia (comedy), they personified the force of creative inspiration. Even today, many people describe creativity as a capricious power to be harnessed – some even speak of it as a kind of ethereal being, who (when the mood is right) flutters down to bestow inspiration (and possibly genius) on the lucky artist or writer. I don’t hold a great deal of stock in the ides of muses, simply because as a writer I don’t have the luxury of waiting for the muse to appear. For me, inspiration comes with the active practice of writing – a ‘bum in your seat’ kind of inspiration rather than a sprinkling of fairy-dust. Although this week I found, in the midst of some dreadful first draft writing, there was a moment of inspiration – generating a single line that opened up a character and a relationship in a way I hadn’t expected. In that moment, it truly was as if I had a muse on my shoulder but she certainly wouldn’t have been able to visit had I not been typing away in the first place.

As Stephen King describes it, the muse is ‘a basement kind of guy’ and my fellow blogger, James Scott Bell often likes to refer to the ‘basement guys’ when he describes his writing process. I like the analogy, particularly because, as King says, writers still have to do the grunt work regardless – because only in burning the midnight oil can you find the bag of magic in the end. Although sometimes, especially when stuck in the middle of a chapter, I really wish there was some other-worldly goddess who could visit and endow me with talent and inspiration:)

Apart from the concept of the muse as an ethereal visitor, there’s also the real life people  that many called their muses. From Dante’s childhood sweetheart Beatrice to F. Scott Fitzgerald’s wife – these so-called muses inspired and motivated the creation of great works of art. Often times, these muses were lovers, mistresses or wives – I couldn’t find any great example of a husband muse but maybe I didn’t search widely enough! I like Anais Nin’s perspective when she wrote: “For too many centuries women have been being muses to artists. I wanted to be the muse, I wanted to be the wife of the artist, but I was really trying to avoid the final issue — that I had to do the job myself.”

I guess my only real muse is my collie Hamish – he’s my constant companion, lying on the floor by my chair while I’m writing. He’s always willing to listen as I complain or tear my hair out in frustration, and is always happy to misinterpret my triumphs (a completed chapter!) as a request to play tug with a chew toy. He willingly goes for multiple walks a day when I need to clear my head and is always content to lie next to the couch when I resort to watching Masterpiece Theatre as ‘research’.  In honor of him (and my previous collies) I always try to include at least one collie in each novel I write:) As you can see from this photo, he really is the perfect writer’s muse. 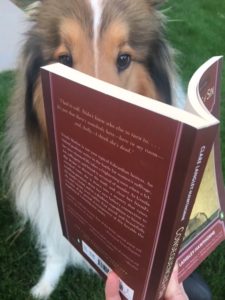 As much as I would love to embrace the whole concept of the muse, I think my attitude can be best summed up by a quote from a fellow Australian writer, Kerry Greenwood (of Phryne Fisher fame), when she said. “If I ever saw my muse she would be an old woman with a tight bun and spectacles poking me in the middle of the back and growling, ‘Wake up and write the book!'”.

So TKZers do you have a muse? If so, in what form does your muse visit (real or imagined)? Do you ever feel like you could use one to sprinkle some fairy-dust of inspiration?