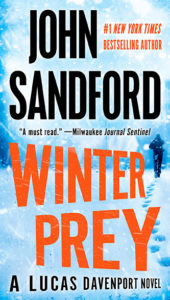 A while ago I wrote about the perils of the eating scene, how to rescue them from dullness by injecting a few forms of conflict.

Most of us include restaurant or sitting-down-for-coffee scenes in our books. They are a natural part of life and provide an opportunity to delve a little deeper into relationships. Those relationships can be between friends, family, or potential lovers.

An eating scene can also be a “breather” in an otherwise relentlessly-paced thriller. It helps sometimes to slow down the pace. The trick, of course, is not to make things too slow.

One technique to keep these scenes from bogging down is called the jump cut. This is a screenwriting term referring to a scene that jumps slightly ahead in time while staying in the same location. It’s used to excise irrelevant or otherwise dull material, so only the “good stuff” remains.

John Sandford uses this technique in his thriller Winter Prey. The hero, Lucas Davenport, is an ex-cop now living in Wisconsin. The local cops ask him to to take a look at a murder scene. There he encounters a small-town doctor named Weather Karkinnen. She is smart and straight-talking. Naturally, there’s a bit of a spark between them.

Several chapters later they see each other again. Davenport asks Weather to have dinner with him. She suggests a local joint that offers a wine choice—red or white, with breadsticks on the table. As they walk to the restaurant from the parking lot there is a small interchange of backstory material.

Then we jump cut, via white space, to their getting seated in a booth and exchanging a little more information, but deeper this time, as they are beginning to trust each other. It’s a long conversation that follows, punctuated by jump cuts. After the white space, a new paragraph begins with ALL CAPS. It looks like this:

AND LATER, OVER walleye in beer batter:
“You can’t hold together a heavy duty relationship when you’re in medical school and working to pay for it,” Weather said. He enjoyed watching her work with her knife, taking the walleye apart. Like a surgeon…

AFTER A CARAFE of wine: “Do you worry about the people you’ve killed?” She wasn’t joking. No smile this time.
“They were hair balls, every one of them.” …

“YOU DON’T ACT like a doctor,” Lucas said.
“You mean because I gossip and flirt?” …

And so we get through a long restaurant conversation without needless filler. It flows nicely, the conversation getting more intimate as it goes along, so by the end of the chapter we’re pretty sure these two will soon be lovers.

It’s also a nice break in what is essentially a police procedural.

White space on the page is your friend. It helps harried readers hang in there. So when you write a scene that is a long conversation, consider:

For a hilarious movie example of the jump cut, here is a scene from the Preston Sturges classic, The Lady Eve. Barbara Stanwyck plays a con woman who schemes to marry the straight-laced heir to a fortune, played by Henry Fonda. She doesn’t expect to fall for him, but she does.

But when Fonda discovers her duplicity, he pretends he never loved her, that he was playing her for a sucker. To get revenge, Stanwyck comes back into his life as a woman named “Eve” and wins his heart. They get married. On their honeymoon night, on a train, Stanwyck completes her plan by telling Fonda about a previous marriage when she was sixteen, to a stable boy named Angus. Fonda is shaken, but forgiving … until she starts dropping the names of several other former husbands! (Press play then move your cursor off the clip. Enjoy!)