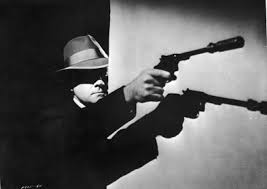 We’ve all seen how silencers work on firearms, right? Our assassin lies in wait as his victim approaches down the street. His silenced revolver is loaded and ready to fire. The shooter takes his time, waits for his shot. And then, from ten feet away (or 20 yards away), he makes his move. The revolver puffs twice. Phut, phut. The victim falls, and no one knows whats wrong. The killer makes his getaway.

And that, ladies and gentlemen, is yet another example of how movies and television get pretty much everything wrong when it comes to firearms and tactics. Where, oh where to begin?

First of all, they’re called suppressors, and that’s because they’re not all that quiet. Except sometimes.

A YouTuber who calls himself SmarterEveryDay posted a unique and very cool video on the function of suppressors. He hooked up with a guy from Soteria, a suppressor manufacturer from Munford, Alabama, and together, using a high speed camera and a see-through acrylic suppressor, they were able to demonstrate exactly how a suppressor does its thing.

In case you can’t get the video to run, the suppressor (or the “can”) uses a series of internal baffles that contain the flash and expanding gases of a fired round, and then vent them slowly. The effect is a more muffled report. But there is still a substantial report. Such things are hard to quantify in a blog post, but to my ear, most suppressed rifle shots sound like unsuppressed small caliber pistol shots. Click here for a video of me shooting a suppressed Heckler & Koch MP7 at the Navy SEAL range in Virginia Beach. What you’re hearing is a wicked little 4.6mm round, which translates to around 19 caliber.

The real benefit of suppressors is muzzle flash control.

Imagine you’re a bad guy doing bad things, when in the middle of the night, you hear pop-pop-pop and your friends start falling down around you. There’s noise, but no muzzle flash–no visual reference for where the attack is coming from. It’s just from out there somewhere. Recognizing your situation for what it is, you pick up your own weapon to return fire, and every pull of the trigger releases a blinding flash at the tip of the barrel that not only destroys your night vision, but announces your location to anyone who maybe hadn’t noticed you yet. Your night is likely to get pretty unpleasant. For more information on night vision technology for firearms, you could read nightvision scope reviews from outdoorempire.com.

For military operators, SWAT folks, Border Patrol and all manner of other groups who do dangerous things under the cover of darkness, suppressors, combined with night vision technology, are tremendous force multipliers. Owning the night doesn’t mean much if every shot gives away your location.

You can’t suppress a revolver.

Before my gun buddies get too twitchy that I let that first picture stand too long without contradiction, I need to point out that every old movie that shows a suppressed revolver is demonstrating the impo 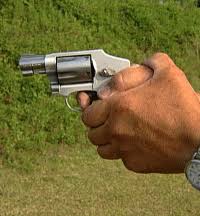 ssible. The only way a suppressor is even a little effective is if the combustion gases are all contained long enough for the pressure to dissipate. As the picture shows, every revolver has a gap between the cylinder and the barrel, through which a significant amount of gas escapes. So significant is 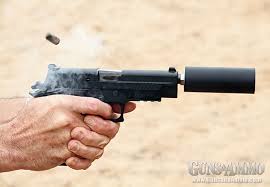 the pressure, in fact, that a revolver needs to be fired using a significantly different grip than that used with a semiautomatic pistol. if you rest the thumb of your support hand along the base as you would with a semi-auto, you’d stand a good chance of blowing your thumb off with the escaping cylinder gas. The technical term for that is “a bad thing.”

Guns need to be modified to accept a suppressor. 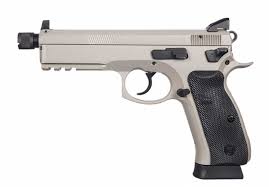 Because of the pressures involved, adding a can to the muzzle of a firearm requires a strong bond. For a suppressor, that means lots of pretty fine threads that extend beyond the frame of the firearm. The picture of the 1911 variant pistol shows the modified barrel that would be used to accept a can. As shown, the threads are protected with a threaded cap, and the can has not yet been attached. As shown, the gun will still shoot just fine. Also note that this pistol has taller sights than usual to accommodate diameter of the suppressor.

Bullet speed means more than bullet size when it comes to suppressor effectiveness. 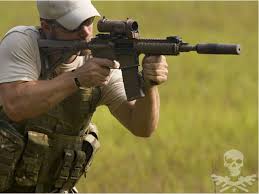 The bang of a gunshot actually has several sources. First, there’s the obvious explosion of gunpowder in the breech. Depending on the load, that may or may not rise to the level of detonation, but in any case, there’s a lot of fast-burning gas. Second, in the case of high-powered pistols and rifles whose bullets travel at supersonic speed, there’s the sonic boom that is caused by the projectile in flight.

Shotguns, on the other hand, are almost always subsonic. (I can’t think of one that is not, but I’ll avoid the absolute anyway.) A full load of .00 buckshot will send nine to fifteen .32-caliber pellets downrange at around 1,100 feet per second, and because they are not rifled, they lose velocity more quickly than bullets. Thus, a suppressed shotgun is really very quiet, to the degree that no hearing protection is required.

If you really need the drama of more traditional “silencer” . . . 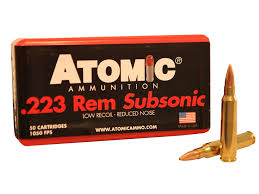 If your story desperately needs the visuals or drama of that phut, phut of old, you’re not totally out of luck. Most manufacturers make a line of subsonic ammo in most calibers. When used in conjunction with a suppressor, they can be fairly effective. You’re still going to get more of a bang than a phut, and it will still be audible within, say, 20 yards in the open, but you might not hear it in the basement if the shot is fired on the second floor. All else being equal, larger calibers create louder noise.

If your character really needs to shoot a bad guy at bad-breath distance and not be detected in the next room . . . 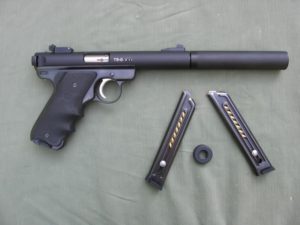 This picture of a suppressed .22LR pistol also shows the ring (now removed) that protected the threads before the can was attached.

I have it on good authority that the preferred bullet for wet work contractors engaged in close-in killing is the subsonic .22LR (long rifle) round. This is the little bitty round that most people think of as a plinker–the round you fired at summer camp when you were a kid–but in reality it is the most common caliber in the world, and is therefore the world’s deadliest round in terms of sheer numbers of people killed (including Bobby Kennedy). When fired through a good suppressor, a subsonic .22LR doesn’t even produce a phut. The only audible noise is the clack, clack of the action.

Those are the basics. I’ll be happy to answer any questions you might have. Okay, TKZers, it’s your turn.

34 thoughts on “The Truth About Silencers”