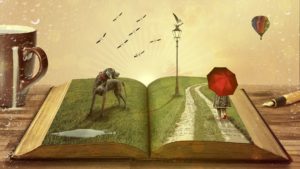 Last week commenter Alec asked: “JSB, I’m reading your Ty #1 book at the moment (I’ve read thru Chap. 36). I’m struck by two things – the amount of dialog and you seem to be using and chapter breaks to move time along … Do you recommend shorter chapters with the intent being that each chapter reflects a scene or a conversation? I looked and this book has 127 chapters.”

Several years ago I was having my teeth cleaned (stay with me, Alec, this will connect) and the hygienist asked what I did for a living. I told her I was a writer. (Such conversations invariably lead to the person asking something like, “Oh, have I heard of you?” Which leads, also invariably, to a furrowed brow and some sort of negative response.)

I gave her my name.

As she put the little bib on me, she asked, “Have you heard of James Patterson?”

She leaned over conspiratorially and said, “I know his secret.”

So that’s it! So simple! Short chapters = millions of copies sold!

I’m only half kidding. For Patterson really did popularize the short chapter method for thrillers. Indeed, much of the time he takes what would be a traditional chapter of, say, 2k words or so, and breaks it down into three or four shorter units. The last line of a unit will have some sort of read-on prompt and there you have it—a page turner. It’s kind of worked for him.

In the early 2000s, as Patterson sold more and more, I began to notice the chapters of other thriller writers getting shorter, too.

Which was aces with me.

I’m a movie guy. I grew up devouring movies on the tube. There was a regular program called The Million Dollar Movie on a local L.A. station (Channel 9, I think it was) and they’d show the same movie each night for a week, and twice on Sunday. I’d sometimes take in the same movie four or five times.

For my first official date I took the girl to a movie. It was a really romantic one, too. Willard, a horror movie about killer rats. (I should mention that this was also my last date with said girl.)

Still with me, Alec?

When I found out you could actually major in film studies at the University of California, Santa Barbara, I was all in.

I’m drenched in movies, and indeed it was a movie that reawakened in me a desire to try to write and sell stories.

Naturally, being from Tinseltown, I started with screenplays. I really learned about structure and dialogue and writing tight scenes via screenwriting.

Part of what got me a contract to write legal thrillers was the acquisitions editor telling me that I wrote “cinematically.”

Heck, I couldn’t help it.

I began my fiction career writing in traditional chapters, of a certain minimum length. Then one day I picked up a book by the hardest of the hardboiled, Andrew Vachss. It was Dead and Gone, and I loved his approach. No chapters. No numbers. Just scenes, some long, some short, set off only by white space and a drop cap. Here’s a screenshot of the first page: 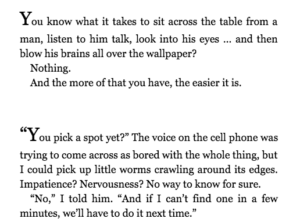 What I loved about this was how liberating it felt. This was permission to write in pure cinematic style.

So when I began writing Try Dying, the first in my Ty Buchanan legal thriller series, that’s how I did it. In deference to the publisher, I did number the scenes. But the point is that writing this way means a scene can be as long or as short as it wants to be. No padding required. It also lets me easily control pace. I can put in a short scene that is rapid-fire action, or quiet emotional reflection, depending on how I want the book to feel at that point.

There are lots of possibilities so long as the reader is never lost on POV.

And that’s why I write in scenes.

Alec also mentioned the amount of dialogue, implying that it seemed, well, like a lot.

That’s because it is. I write thrillers and noir, and dialogue plays a major role in both. But I also love writing dialogue. Again, the movie influence. (See all those “zingers” from Friday).

So assessing the quantity of dialogue is the wrong focus. The only question is, does it work? The Fletch books by Gregory Macdonald, for example, are almost entirely dialogue. And they work as both mysteries and entertainments.

In addition, dialogue helps pace because it creates white space for the readers.

And dialogue is the fastest way to improve your novel. When an agent or editor (or reader, for that matter) sees crisp, orchestrated dialogue, they immediately gain confidence in the writer. That’s because they see so much flabby, plain-vanilla dialogue in their submissions.

I recall another date I went on where—

33 thoughts on “Short Chapters and Lots of Dialogue”