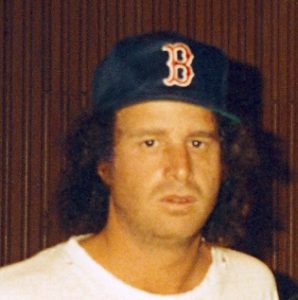 If I had to name my favorite comedian, the one I’d most like to see in concert, it would be Steven Wright.

Because he’s a true original, not your typical “Hey, what’s the deal with airline peanuts?” standup guy. He has a hangdog look and deadpan delivery. He specializes in one- or two-liners that are language-bending riffs that twist reality into an existential pretzel. He says things like:

I used to work in a fire hydrant factory. You couldn’t park anywhere near the place.

I stayed up all night playing poker with tarot cards. I got a full house and four people died.

I went to a restaurant that says they serve breakfast at any time. So I ordered French Toast during the Renaissance.

There have been many one-liner comedians, like Henny Youngman (“A doctor gave a man six months to live. The man couldn’t pay his bill, so he gave him another six months.”) and Rodney Dangerfield (“My psychiatrist told me I was crazy and I told him I wanted a second opinion. He said, Okay, you’re ugly, too.”), but Steven Wright has carved out a unique niche and loyal following.

He knows his unique selling proposition (USP). He probably wouldn’t use that term, which comes from the world of marketing. But the concept is the same.

In brief, the USP is that special something that sets your product apart from the competition. It’s a market differentiation strategy. And it’s necessary because we have markets stuffed with similar products vying for attention.

There were several delivery services available when Federal Express came along. What did FedEx offer that was different? Overnight delivery. It became the center of all their advertising: “When it absolutely, positively has to be there overnight.”

In the 1990s a fellow named Bezos thought this internet thingy was going to be important someday. He also knew people liked reading. What if he could create a way for readers to browse for books online, order the ones they wanted, and have them delivered right to their door?

I wonder whatever happened to Amazon? I’ll have to look it up.

The point is, Jeff Bezos is a true visionary, and the first thing a visionary does is develop a USP.

You should too, writer. What is it you bring to the table that a reader can’t just as easily get from some other scribe?

Part of this calculus is voice. But beyond that, it’s what you care about most in your writing. What do you want readers to feel, to know, to awaken to? What themes do you find yourself gripped by?

Write out a mission statement. A mission statement is a one- or two-line encapsulation of what you do, why you do it, and why the market should take notice. For example, here’s Amazon’s current version: “To be Earth’s most customer-centric company, where customers can find and discover anything they might want to buy online, and endeavors to offer its customers the lowest possible prices.”

Now take USP to each book you write. Look at your plot and characters and ask, How can I do something different? Even a little difference can make … a difference.

When I started thinking about my series character Mike Romeo, I knew I wanted him to be a “down these mean streets” character. We’ve had a lot of those. So I asked myself how I could set him apart. After considering several options, I landed on one of my own special interests, philosophy. I made Mike a genius kid who went to Yale at age fourteen and received specialized training in both the Eastern and Western intellectual traditions—before circumstances sent him on the off-the-grid trajectory. He’s still a seeker of wisdom, but wrapped inside a fighter’s skin. He will try to reason with you, but if you insist on being mean will employ more gladiatorial methods of persuasion. That was enough to get me excited about launching the series.

Another area where authors can strike rich veins of uniqueness is the supporting cast. Don’t ever write “throw away” secondary or minor characters! Use them to add spice to the plot. This is one of the things that makes Janet Evanvoich’s Stephanie Plum series so popular. For my Ty Buchanan legal thriller series I concocted a cast that includes a basketball playing nun (who is not shy about using her elbows), and a former college professor who went nuts for awhile and now runs a coffee house and raises butterflies for funeral ceremonies.

In short, friends, you are the CEO of a company trying to compete in a crowded market. The company is you. Your product is books. So do what all successful companies do—develop that USP. Set yourself apart. Strive to become an original.

I’m traveling today, so may not be able to drop by much. Talk amongst yourselves:

10 thoughts on “What is Your Unique Selling Proposition?”