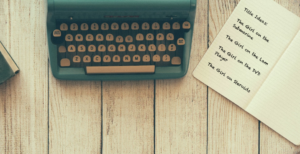 Part of me wishes it were easy to describe my typical writing day. I have heard about them, those smug productive hours when a writer – usually male, it has to be said – sits down each day at 9am with an espresso, writes till 1, makes bouillabaisse, writes from 2 till 5, plays tennis, and after supper sits with a glass of single malt whisky reading over what he’s written that day. That is a scenario I both crave and detest. It will never be that controlled and disciplined for me.

This is an absolute slander! I make a sandwich for lunch, haven’t played tennis in years, and in the evening prefer a California red.

I do, however, have a typical writing day, though of course it has varying tones and I’m free to be as flexible as I want to be. That’s the nice part of being your own boss. Yes, I have to call myself into the office and chew myself out from time to time, but I generally get along with the fellow.

I’m up before the sun rises. The coffeemaker was set to timer the evening before so my morning brew is ready. I love starting work in the dark. Most people I’ve broached this subject with look at me with a mix of wonder and horror. Their eyes and dropped jaws nonverbally retort, “You do what? The dark? Are you daft?”

Yep. From daft to draft!

I try to do some writing immediately, to bring up what my writer’s mind has been working on all night. There might be a good plot twist there, or an idea for another book, or maybe just a way of phrasing something. Or perhaps it’s just junk. Whatever it is, I spill it into a free form document that I’ll assess later.

Later on, I’ll give a light edit to my previous day’s pages, then go for my quota.

What I really have to watch out for is the temptation to jump onto social media the moment I hit some challenge or other. I’ve written about this before.

However, I do like having some ambient noise going on, which means I will sometimes be found writing at some local coffee establishment. But at home, I turn on Coffitivity. I compose in Scrivener, which allows me to have a background on my screen. I have taken a photo of my favorite deli, Langer’s, so it’s like I’m there in a booth, writing: 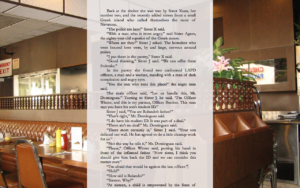 From about 11 – 1 I’ll generally take care of business matters (e.g., marketing, email) and have some lunch. I’ve pretty much settled that from 1 – 3 it’s zombie time. My brain just wants to lie in a hammock. So I’ll work in a power nap (15 – 20 minutes). That sets me up for the late afternoon. I can usually squeeze in another hour of writing or editing from about 4 – 5.

Then I pretty much knock off. Dinner with Mrs. B. We might watch a movie or classic TV show. If I finish a book, or my wife closes a real estate deal, we’ll celebrate by going out to eat. It’s a short drive to Malibu, where we can nosh by our beloved Pacific Ocean.

That’s as typical as it gets, so long as there are no earthquakes, fires, mudslides, power outages, or locusts.

So now I’d like to hear from you. Do you have a typical writing day? If not, how would you design one?

42 thoughts on “Do You Have a Typical Writing Day?”