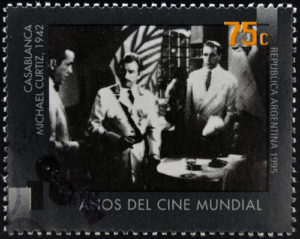 I’ve been revisiting(read: binge-watching) some favorite films recently, and started noticing how one moment or a single line of dialogue in a movie can reveal everything one needs to know about a character.

These were a couple of my favorite character-revealing moments in film:

Casablanca, Captain Louis Renault: “Round up the usual suspects.”

Captain Renault actually delivers variations of this line twice, and that repetition reveals two important aspects of this secondary character. Renault is speaking to newly arrived German Major Strasser the first time he refers to rounding up suspects, in a way that establishes the French Renault as a compliant bureaucrat who is implementing a foreign power’s bidding. He delivers the line again right after Major Strasser has been shot, simultaneously saving Rick Blaine and indicating that his character has broken away from his obeisance to the German/Vichy Regime.

Lawrence of Arabia, Omar Sharif: “He is dead…(Y)ou are welcome.”

Between the long, slow cinematic entrance (during  which he emerges from a distant dust cloud on the horizon to filling the screen) and a couple of lines of terse dialogue, Omar Sharif makes an unforgettable impression as Sherif Ali in Lawrence of Arabia.

In that scene we watch Sherif cut down a trespasser on his property, while simultaneously extending traditional courtesy to a visiting stranger.

Of course in literature, dialogue and prose must establish the essence of a character without any assistance from camera tricks and musical scores. In your own writing, can you think of a moment or a line of dialogue that revealed the true nature of one of your characters?