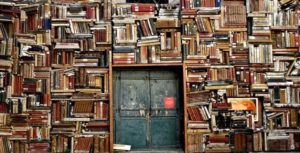 Kindle Scout is Amazon’s innovative program where readers “scout” for new books and vote for ones they believe should be published. Back in April, I covered the basics of Scout for TKZ. Since then, I submitted my thriller Instrument of the Devil and went through my own 30-day campaign. Today, let’s open the Scout door and take a tour inside.

SUBMISSION PROCESS:
To submit to Scout, Amazon requires a cover (at author’s expense), a complete, never-before-published, edited manuscript of 50+K words, a 45-character one-liner (logline), a 500-character book description, author bio, and a thank-you note to readers who nominated the book (more on this later).

After Scout accepts the submission, they select the dates for the 30-day campaign, and provide a link that shows the preview exactly as it will appear on the Scout site. The first 25 or so pages of the book are excerpted as a sample for readers to vote on.

The contest is ongoing, with new entries appearing each day. At any given time, more than 150 books are in various stages of their campaigns. Categories include: literature/fiction, mystery/thriller/suspense, romance, sci-fi/fantasy, and teen/young adult.

Entries are further classified as “Hot and Trending,” “Recently Added,” and “Ending Soon.”

BEGGING FOR VOTES:
The hardest part for many authors, who are often averse to self-promotion, is what I call begging for votes. It’s a tough balance to strike, asking people to nominate your novel without sounding cheesy. You’re requesting a favor, but fortunately you’re able to offer something in return—a free book.

Publicity drives your campaign, using social media like Facebook and Twitter, business cards and bookmarks printed with your Scout link, and direct emails. My email list started with 130+ names, which I divided into different categories, each receiving a different message tailored to that particular group.

First tier consisted of close writing associates, critique buddies and beta readers who’d been intimately involved with the book’s creation. All previously promised support, so asking them to nominate and share on social media was easy, and they came through like true friends.

Second Tier listed other writers, people I’d met at conferences or had interviewed for articles, and business acquaintances. Their note specifically addressed our mutual writing interest and asked them to take a peek at the excerpt.

Third Tier were friends who don’t write—and who think writers are a pretty weird bunch! That was the trickiest email to craft. Mass mailings can be mistaken for spam or scam, especially to people with whom contact is infrequent. In fact, my college roommate wrote back, asking, “Is this email really from you?” because the IT guy at her job warned her about clicking on an unknown link. We wound up having a nice catch-up conversation by phone.

WEEK 1:
After I sent out 130+ emails, friends responded with terrific support. Instrument of the Devil hit “Hot and Trending” (H&T) off and on during the first six days.

Scout provides statistics you can access privately (not accessible to others) that count how many views your entry has received. However, views are not the same as nominations, and Amazon doesn’t reveal the number of nominations. The stats are further broken down by how many hours in H&T, number of views from internal links (the Scout site) compared to external links (social media, your website, other websites, etc.), plus how many hits from each source. The stats are updated daily, while H&T updates approximately hourly.

LESSON #1: FACEBOOK ROCKS.
Facebook generated more than half the views from external sources. I’m not even on FB, but after seeing these results, I’ll be joining! 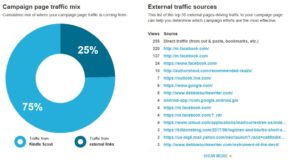 WEEK 2
That loud smack you heard were my stats hitting the wall. After the initial rush of 200-300 views per day, they dropped to six on one day, nine the next, with a high of 19 that second week. Zero time in H&T. Underwhelming and discouraging.

Kboards are online discussion groups specifically focused on publishing through Kindle. At this low point, I dug deep in Kboards, especially one thread devoted to Scout experiences and requests for nominations.

LESSON #2: LEARN FROM SCOUT VETERANS
Many Scout entries come from multi-published authors with substantial backlists. They discovered Scout is a great no cost launching pad for a new book. Some authors don’t even care if their book is chosen because they parlay reader views into a larger customer base when they publish it themselves.

That’s the philosophy of Lincoln Cole, previous Scout winner and author of the indispensable Kindle Scout Guide, as well as an excellent vetted list of marketing resources. With 12 books published, and refined promotional skills, his most recent Scout entry garnered more than 11,000 views with over 90% of the time on H&T. When the book wasn’t selected, Kboard members were stunned.

Although Amazon describes Scout as “reader-powered publishing,” great stats are not the only factor that determines if a book is chosen or not, as Lincoln’s experience demonstrates. But the reasoning behind their editorial choices remains mysterious.

Nevertheless, Lincoln shrugged off the rejection and plans to launch The Everett Exorcism himself on Kindle Direct Publishing (KDP), fortified by his thank-you note.

NOW…MORE ABOUT THOSE THANK-YOU NOTES
At the end of the Scout campaign, the note you’d submitted with your entry is sent to everyone who nominated the book, win or lose. If it’s chosen, they receive a free copy. If it’s not chosen, Amazon still sends nominators a notice when the book goes on sale through KDP.

Lincoln takes that one step further. His thank-you note promises a free book, win or lose, if readers sign up at his website. He understands a large email subscription list is vital to authors, who use it to keep in touch with fans, make special offers, and announce new releases. Plus readers who discover him on Scout may also buy from his backlist. This guy knows how to maximize marketing.

Since my own website subscription list was at the high one-figure level, I rewrote my thank-you note, making the same free-book offer, and resubmitted it to Scout. Considering the dismal second-week stats, I prepared to self-publish Instrument of the Devil on KDP.

LESSON #3 – “YOU DON’T HAVE TO SPEND A BUNCH OF MONEY TO GET DECENT STATS.”
Those words of wisdom came from Scout veteran Julianne Q. Johnson, whose fifth entry Ghost in the Park is now up for nominations. Cash-strapped authors are understandably reluctant to front money on advertising, particularly for books they’re giving away.

According to Julianne, “Stats don’t get you selected, but better numbers get you much more attention when you launch it yourself.” She invested only $15 in her last campaign, generating a respectable 3800 views and 90+% of the time on H&T. Although not selected by Scout, Nick of Time is her highest ranked book so far, with thousands of page views on Kindle Unlimited (a subscription program that pays the author based on how many pages are read).

I consulted Lincoln’s list of marketing resources for promotions specifically tailored to Scout. My advertising budget totaled a whopping $40—$10 to boost a friend’s Facebook reach to 9800 readers, $20 on a one-day social media promo by Just Kindle Books, $10 to Author Shout for a 30-day newsletter campaign. All three delivered significant bumps in page views, but the best ROI came from Author Shout.

WEEK #3
I re-contacted my email list, with a follow-up offer of the free eBook, win or lose. This also served as a subtle reminder to people who might have forgotten to nominate without bugging them. Friends responded positively and again shared on Facebook.

Meanwhile, back at Kboards, I contacted more Scout winners to learn about their experiences.

Jada Ryker’s mystery Take the Body and Run was published by Kindle Press in 2016. “Before Scout,” Jada says, “I was lucky to break even on cover and editing costs, let alone paid promotions. I’ve sold more copies of the KS winner than all my other books combined.” She adds, “Winning the contract tells me the book was good enough to stand out in a field of excellent offerings, and be chosen for publication. That feeling is priceless.”

William Bernhardt has over 40 published titles, with more than 10 million books sold, yet still entered Scout with his new novel, Justice Returns. Why? Bill’s answer: “I think Amazon Publishing is the best place to be today, and Kindle Scout was the quickest and agent-free way to get there. NYC publishers are not offering anything close to a 50% royalty. And I’m retaining most of my subsidiary rights.” Although Bill still pursues traditional contracts, he says, “More and more, Scout is attracting professionals who see it as a way to attract attention to their books and get them into the Amazon Publishing network quickly and without giving away a large percentage of their profits to an agent.”

WEEK #4
The last eight days of the campaign gave me new hope. The book jumped into Hot & Trending and stayed there until the end.

The final tally was 3000+ views, far lower than many Scout submissions, but I was happy and had discovered tricks I planned to use when self-publishing the book on KDP. Then I learned…

LESSON #4 – NOBODY CAN PREDICT WHAT AMAZON WILL CHOOSE
Two days after my Scout campaign ended, at 10:30 on Saturday night, the email arrived.

Congratulations! Our readers have spoken, and your book Instrument of the Devil has been selected for publication.

Why did the unseen gods of Amazon smile on my book instead of any number of books with thousands more views? Danged if I know.

But I’m not about to argue. And I agree with Jada Ryker—that feeling is priceless! 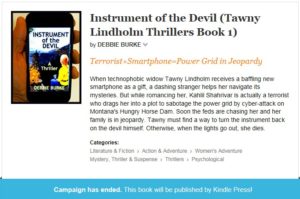 Debbie Burke’s thriller Instrument of the Devil is currently in production with Kindle Press. Check her website for the launch date.