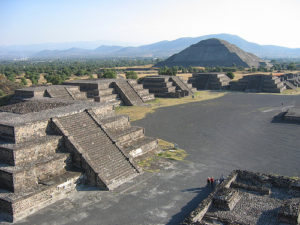 It’s Spring Break so I will be visiting Teothihuacan outside Mexico City when this blog posts, so my apologies, I probably won’t be able to respond to your comments until later in the day/Monday evening. I’ll be showing my boys these amazing pyramids as they have been studying Mexico’s history in their social studies class. We will also visit the  Anthropology museum in Mexico City as well – when traveling with me no one gets to avoid history!

One of my favorite parts of research is visiting places and immersing myself in a sense of history. Some places are able to evoke the past easily – as if the past remains stored in the stone walls, cobble stones or timbers of the houses. Other places, however, feel more inaccessible. I find Teothihuacan, with its vast avenue and towering pyramids, is a place that evokes awe but is also so alien in many ways that it is hard to picture what life must have been like way back then. It’s more challenging to imagine the past here but nonetheless the echoes are still there, if you listen hard enough. Likewise, I used to find the Australian landscape much harder to ‘read’ – the aboriginal past seeming to be more elusive and the colonial overtones a little too blunt. By comparison, somewhere like London the past really is omnipresent. For me, the voices of the past are all around and it is easy to imagine the sights, smells and sounds of history.

So TKZers where has history come alive for you? What places have you visited (for research or pleasure) that have evoked the greatest sense of history?

10 thoughts on “Where History Comes Alive”