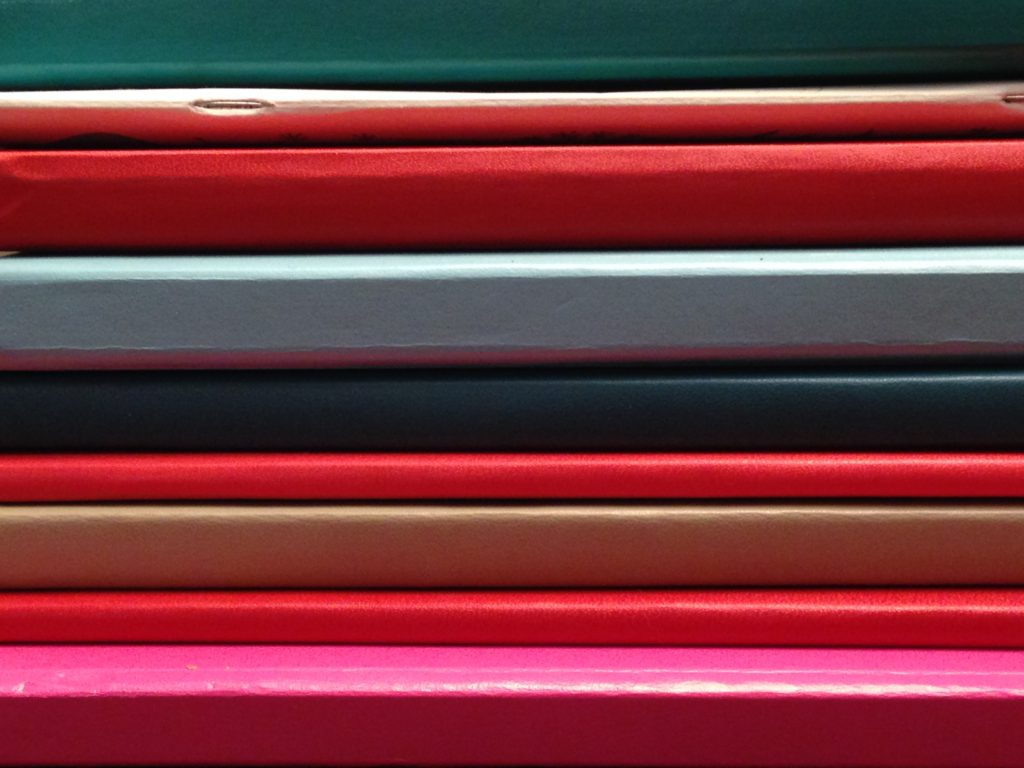 Look at all the lovely notebooks.

Light Blue Leuchtturm–Mid-End of 2016 Bullet Journal. I didn’t get into Bullet Journaling until late last year. Now using for blog thoughts and ideas

Bright Pink Leuchtturm1917 Master Slim–This started out as my 2017 Bullet Journal, but it proved too large for toting around. The 5×8 version (top) fits nicely in any purse or bag. I consider this my Journal of As Yet Unrecognized Possibilities.

For somebody who only owned one non-spiral bound notebook six years ago–the Red HC Moleskine–I’ve certainly made up for lost time. What you don’t see are the notebooks for my last three novels, the Bliss House Trilogy, because I’ve archived them.

As a young writer, I wasn’t much of a journaler. I wanted to write, but I was too embarrassed to write down things that might look silly to other people and carried around my ideas in my head. Of course, journals are meant to be private. I have no idea who I thought would want to even peek at my journals. The words were hardly titillating, the ideas tentative and unpolished. It’s not like I kept money or passwords between the pages.

But now that I’m a woman of a certain age, journals have become critical tools. Not only do I have more pressing/interesting  ideas, I also have a memory like a sieve. Journals are my full-body, writerly Spanx. They keep everything tucked in and looking, if not good, at least organized.

I’ve become very attached lately to the notion of ideas floating from writer to writer, looking for the right one to tell the story. It’s an idea I first read of in Elizabeth Gilbert’s Big Magic. She talks about starting to write a novel that had been sort of pestering her–but she struggled, and it just wasn’t happening. So she temporarily shelved it. But then she talked to novelist Ann Pachett, who described her own work-in-progress. And the ideas were nearly identical. But Pachett’s book was going very well, and she later finished it and sold it.

By writing ideas down, I hope to tether them at least for a while. Collect them, live with them, let them nurture themselves with the attention I can give them. I can’t tell you the number of times I’ve gone back to the pages of that Red HC Moleskin when I needed a quick idea fix.

Still, it’s a rather intimidating pile of notebooks. They don’t travel easily, and I’ve only recently gotten used to having the Bullet Journal always with me. For a while I tried an app called Wanderlist, but tapping reminders and notes into my phone makes much less of an impression on me than when I write things down. Then I forget to look at the app often enough.

Tell us how you keep track of your ideas and schedule. Do you journal? Or do you go the electronic route?