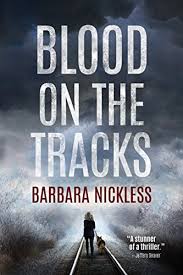 Today we welcome Barbara Nickless as a guest blogger. Her new novel, Blood on the Tracks, has just been released and today she talks about some of the real problems involved in researching this great book. I’ll be on the airplane home to Denver after cheering my husband on in the NYC marathon so I hope you give Barbara a great TKZ welcome and lots of comments!

As soon as I decided to write a police procedural about a modern-day railroad cop in Colorado, I knew I had to set my thriller in the very real city of Denver. Denver is a major hub for western railroads, which have large operations there. As a railroad cop, my protagonist’s territory would cover 35,000 miles. But she—like her railroad—would be based out of Denver.

The problem? Even though I live only 60 miles away, Denver might as well be on the other side of the world for all I knew about it. To write a believable book, I had to go beyond geography. I needed to understand the workings of the Denver Police Department, the ins and outs of the railroads operating out of Denver, and Denver’s history, demographics, economy, and government. I had to get a feel for where my heroes would dine, work, study and live. Just as important, I had to know where my villains would lie, cheat, steal and murder.

Unsure whether to use actual settings for your novel? Here are some dos and don’ts if you decide to play it real.

Do get your facts straight. Errors will jolt your readers out of their willing suspension of disbelief. Start by learning as much as you can about your locale upfront. Online resources like Wikipedia and Google Earth provide everything from weather conditions to street views. There are websites for businesses and institutions where your characters might work, as well as information on museums and restaurants where they can conduct meetings or relax. Additional digging can turn up articles written by the locals, which will give you a feel for the local lingo and tell you what about their city makes them proud (or ashamed). Look at online magazines and newspapers, too, and consider subscribing. When I needed a swanky home in a swanky neighborhood for one of my characters, the Denver magazine 5280 told me the best areas of town, while Zillow offered maps, prices and photographs. And speaking of maps! I bought a large city map, a Denver street guide, a railroad map and a police precinct map. Hang them on your wall and add satellite or street-level photos. Or use pushpins to mark where the bodies are buried.

Don’t think everything has to be real-world. Feel free to make up some locales, especially if bad things happen there and you want to avoid a lawsuit. For my thriller, I took real neighborhoods, gave them the twist I needed, then sometimes renamed them. Denverites who’ve read my novel tell me it’s been fun trying to pinpoint neighborhoods and separate fact from fiction. Another huge part of my setting is the railroad my cop works for. Since railroads are privately owned and I didn’t want to risk offending the actual businesses, I created my own. While I’ve done my best to get general railroading facts straight, I’m free to make up the details.

Do travel there if you can. Nothing beats on-the-street research. For my novel, I was fortunate to find a retired Denver PD detective who also loves trains. Not only did he take me on tours of the Denver Crime Lab and police headquarters, he helped me pinpoint train track locations and find hobo camps. The railway cop who provided invaluable information for my book told me where hobos “catch out” (hop a freight train) and gave me a tour of the yards. He also banished my preconceived notion that railway police, like a lot of traditional police, have partners to help shoulder the load.

Don’t worry about getting it perfect. In Blood on the Tracks, I added a disclaimer at the end of the book stating that I’d taken a few liberties not only in the layout of my settings, but also in the institutions I portrayed such as the Denver police and the U.S. Marines.

What about you? Does your book take place in a real setting or a fictional one? And what are some of your tricks for handling either situation?