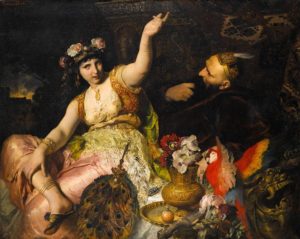 Once upon a time there was a king of Persia who witnessed his wife’s clandestine infidelity. Distraught, the king cried out, “Only in utter solitude can man be safe from the doings of this vile world!”

He then had his executioner dispatch the queen. And he swore an oath that he would ever after take a virgin as wife, abate her maidenhood that night, and slay her the next morning. This plan was to “make sure of my honor. For there never was nor is there one chaste woman upon the face of earth!”

Too bad there was no Xanax back then.

Anyway, the king’s project proceeded apace, until the supply of local maidens began to dry up. One day the king tasked his chief wazir to bring him a beautiful bride-to-be, but the poor counsel could not find one … except his own, beloved daughter.

Her name was Scheherazade.

To save her father’s life, Scheherazade insisted on being delivered to the king. Her resolve was a wonder to her father. What he didn’t know was that the clever Scheherazade had a plan of her own.

She was going to tell stories.

It was midnight when Scheherazade arose from the marriage bed and asked the king’s permission to spin him a yarn. And so she began … told a mesmerizing tale … and left off with a cliffhanger!

The king was so pleased by this that he gave her another night to finish the story. She did, then started a new one, and left off at another page-turning moment. So the king spared her again!

And so it went, for 1001 nights, as Scheherazade extended her life by the power of her storytelling. Included in the tales were the likes of “Ali Baba and the Forty Thieves,” “Sinbad the Sailor,” and “Aladdin and his Wonderful Lamp.”

After the whole cycle, the king was thoroughly smitten (about freakin’ time!), and decided to spare Scheherazade and make her queen.

As I was working on this subject, writer Kristine Kathryn Rusch shared a most interesting post. She wrote about the days following the 9/11 attacks, the despair, the feeling that “we were all waiting for another, equally horrible shoe to drop.”

She needed to escape.

Thank heavens for J.K. Rowling and Harry Potter. I had never read Harry Potter, and frankly, I wasn’t planning to. But I had the first book, and since nothing else was holding my attention (besides the tragedy), I started to read.

And escaped. Harry’s world is different enough from ours to shut out the horrors of the real world, and heal. I will forever associate those books with that need for healing.

I also credit them for teaching me about the value of fiction.

Dean Koontz makes much the same point in his book, How to Write Best-Selling Fiction. “I write to entertain. In a world that encompasses so much pain and fear and cruelty, it is noble to provide a few hours of escape.”

My friend, the late Stephen Bly, once told a group of writers why he wrote the kinds of books he did. First, it was for “Jannie-Rae,” his beloved wife (the writer Janet Chester Bly). Then, he said, it was for that single mom who has put in a hard day at work. She picks up the kids from day care, brings them home, feeds them, gets them washed and in bed. And now she has a few moments to herself before falling asleep, and picks up a book.

If it was to be his book, he wanted it to carry that mom away and give her the fictive dream and the uplift of an inspiring story.

Isn’t that all to the good? Stress relief can extend life. Entertainment can make the present life better. Sure, we can have challenging fiction of various kinds, but the real power comes from the “lostness” of a reader inside a compelling narrative.

That should be the goal, anyway. Just ask Scheherazade.

Have you ever had a book take you out of a dark time? Provide solace? Make you glad to be alive?