Don’t give up at half time. Concentrate on winning the second half. — Bear Bryant 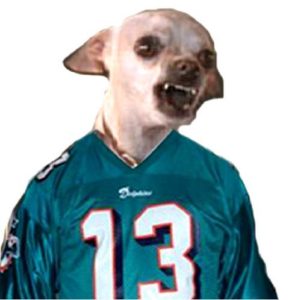 Are you ready for some football?

Wait, wait! Come back! Give me second chance. I promise this will be about writing. But it is the first week of the season and I really love football. This is how much:

I have a collector’s Plexiglas box of Wheaties with Dan Marino on the front.

I used to have Dolphin season tickets and on December 16, 2007, when Cleo Lemon threw a 64-yard touchdown pass to Greg Camarillo to end a 16-game losing streak, I cried like Wayne Huizinga.

I was for years the proud coach of the Killer Chihuahuas, (see logo above) my fantasy football team that made the playoffs four straight years and would have won in year four if Brett Favre hadn’t gone south on me in the last three games.

Okay, okay…I promised to talk about writing. If you hang here at TKZ, you know I love a good metaphor, so I am going to offer up some football strategy that might help you get your Work In Progress down the field, into the red zone and over the goal line. I feel compelled to do this because I myself need a good locker room talk right now. I am up in Michigan staying at my sister Kelly’s place, working on our book. We are on page 244 and we are struggling badly. It feels like we’re deep into the fourth quarter, we’ve been trudging up and down the field in the mud forever, we’re tired and sore, and haven’t scored a point.
Team Parrish can’t SEE the end zone, let alone get into it.

This past Sunday, while we worked, we had the Lions-Colts game on mute in the background. Toward half-time, dispirited and disgusted, I closed the lap-top and told Kelly, “I need a break.”

I popped a Faygo Rock and Rye, turned up the sound and watched the game.
Then came half time. But I wasn’t hearing Kenny Albert and Moose Johnston. I was hearing our own James Scott Bell in his post a while back about how every writer should take a break around the halfway mark and assess how far they had come and where they needed to go.

So I told Kelly that we needed to go back and see what had gone wrong (and right) in the first half and make adjustments. She went to Walgreens and came home with a poster board and some Post-Its. We spent the next two hours laboriously mapping out, chapter-by-chapter, day by day, where our story had gone. It looked like this: 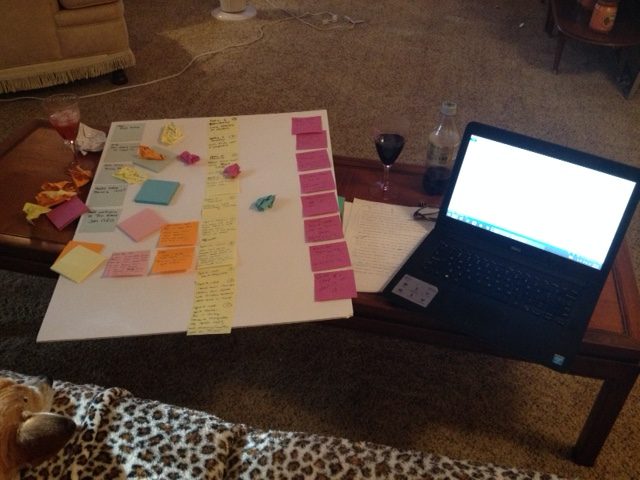 You’ll see that we seemed to make a lot of mistakes and needed a bunch of different colored Post-Its. (More on that to come). And that toward 6 p.m., we were compelled to strengthen our beverage of choice from Faygo to wine.  But by laying out this PHYSICAL map of our book, we were able to see things that we couldn’t see on the computer screen or even on the printed manuscript. Things like:

We had a good juicy set-up, we laid out the hero’s problem, and we sent him off on his quest.  But…

We had four chapters in a row of slow build-up and scene setting that could easily be winnowed down to two chapters. Foul: lazy writing.

We had one day (in book time) that ran three chapters and it defied the laws of physics for Louis to go where he did and accomplish what we needed him to do without him stopping for eat and sleep. Foul: stuffing 10 pounds of plot into a 1-pound calendar day.

We forgot to introduce a character early on who magically shows up later. Foul: brain-farting.

We had a subplot going on off camera that, in calendar-time, did not match up with the on-camera plot. We needed the sub-plot character to drive from Michigan’s upper peninsula to mid-state in time to do a nefarious deed. Problem was, it takes a minimum of 8.5 hours for this drive to happen and this guy would’ve needed wings to get down-state. Foul: Not doing homework via a simple Google Maps check.

Some of you TKZ regulars might recognize our Post-It Method of Plotting. I’ve written about it here before. But for some reason, Kelly and I neglected to do it for this WIP, and here we are, well into the third quarter, and we need to make Bill Belichick-worthy game adjustments if we are going to pull this one out of the dumpster.  Here is a close-up of the finished map: 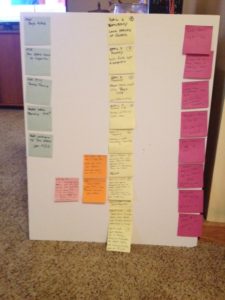 What’s with the colors? The chapter-by-chapter plot map is done in pale yellow.  The gold Post-It is sub-plot that is going on at the same day(s) of what yellow note it is next to. This is how we found out our bad guy couldn’t make that long drive in time. The pale pink note is the time-line of the central murder that happened in the near-past. The blue notes are back-story dates of everything that happened BEFORE the story begins. The purples are just inserts and correx that we will make later.  This book is third-person single point of view (Louis, who always gets pale yellow). In past books, we have used multiple POVs and switch to other colors for each POV so we can make sure at a glance that no one character, especially a secondary one, is getting too much on-camera time and stealing the spotlight from Louis.

So how does Team Parrish feel coming out of this half-time locker room break and strategy session? Full of cautious confidence. We started out this book full of hope and ambition. But as the game wore on, we just sort of flailed and fumbled around out on the field, hoping we could make progress by blind luck and maybe a last-minute field goal.  This is how the Jets play every single year. Or the Browns, whose fans show up at games carrying banners saying “We Still Have LeBron.”  You want to be Seattle. Or the Pats, who find a way to win even with Brady on the bench for four games.

What am I trying to say here? Well, it’s a variation on what all the good folks here at TKZ preach. Have a good work ethic. (you don’t want to be giving up in mid-season just because you’re a little gassed).  Have a good strategy going in. (a great idea or at least a fresh take on an old one). Devise a game plan and keep to it. (that means for some of you out there outlining). Stop at each quarter or at least half-time and see what has gone right and what had failed. Be flexible enough to make adjustments. Don’t quit, because as the great sports sage Yogi Berra said,  it ain’t over til it’s over.

And with that, I leave you with a few classic football cliches that are actually good advice for us writers:

You gotta work with what’s working. This is a variation on the more erudite “You go with what brought you to the dance.” If you’re a hard-boiled type at heart, maybe you shouldn’t try YA romantic zombie fiction just because it’s hot. Yes, stretch yourself, but don’t be crass. Readers smell insincerity a mile away.

It’s important to give the ball right back to the guy who lost it. Yes, you can make mistakes. In fact, they help you grow. If you’ve had a setback, be it a rejection letter, a bad review or just loss of confidence, don’t let it defeat you.  Favre is the leading career fumbler of all time. You think that when he put the rock on the ground, he thought about quitting? Heck no. The guy took risks. (Though the Killer Chihuahuas never forgave him for that last season…)

He heard footsteps. This is the wide receiver who feels a defender gaining on him so he takes his eye off the ball. For you, this means, don’t let distractions cripple you.  This can mean anything from the little — social media, chores, research — to major distractions — envy over other’s success, people who tell you that you’ll never get published.

He ran east and west instead of north and south. Or as Dan Dierdorf put it: “You gotta keep the axis of your body perpendicular to the goal line.”  For writers, this means always moving forward and maintaining momentum. This is my biggest problem because I become stalled in an insane quest for perfection when I should be grinding out that first draft.  I spent too much time running east and west instead of heading toward the goal line. Don’t be like me.  Be a downhill runner.

It’s a game of inches. Success in publishing almost always comes hard and gradually. You pound away at that keyboard, bang your head up against big forces that feel like they are bent on keeping you back. You spend months, years, on your WIP and only manage to move a few yards forward.  But this is how it’s done. Slow and steady. And you never, ever, come prepared to play only one game because you must…

Take it one game at a time. Finish that book, get it out there somehow and then start the next one. And as you do this you will…

Leave it all on the field. You gave it everything you had because, of course…

Here’s to a good, healthy season. And hey, the Lions won. That is enough to give anyone hope.

19 thoughts on “It’s Fourth and Goal: Can You
Push Your Story In For the Win?”