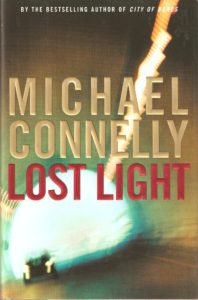 A few years ago I was at the Men of Mystery conference in SoCal, a one-day gathering of mystery writers and readers. The keynoter was Michael Connelly, and something he said hit home.

He was talking about advice he got early on from Joseph Wambaugh. Wambaugh, the L.A. cop turned bestselling author, told Connelly that the really interesting thing is not how the cop works on the case; it’s how the case works on the cop.

Connelly took that to heart as he began his Harry Bosch series, and the development of Bosch over the last nearly quarter century is nothing short of astonishing. We are seeing, right before our eyes, the production of greatest detective series ever written. I love me some Raymond Chandler and Dashiell Hammett. William Goldman once opined in the New York Times that the books by Ross Macdonald were “the finest series of detective novels ever written by an American.”

But in my view Michael Connelly has taken over that distinction.

First off, his plots are always gripping. The complex mysteries come together slowly, piece by piece, as Harry does his detective work. The procedural aspects are highly detailed yet never dull.

But it’s how the cases work on Harry that takes us deeper. In each book there is something that gets to Harry Bosch and grips his soul. For example, in Lost Light, Harry (retired and working privately) sets out to solve a cold case he worked years earlier. He recalls the position of the victim’s body:

But it was her hands that I would remember the most. Somehow when her lifeless body was dropped to the tile, her hands fell together. Off to the left side of her body, they were directed upward from her head, as if she were reaching out to someone, almost beseechingly, begging for something. They look like hands from a Renaissance painting, like the hands of the damned reaching heavenward for forgiveness. In my life I have worked almost a thousand homicides and no positioning of a fallen body ever gave me such pause.

Perhaps I saw too much in the vagaries of how she had fallen. But every case is a battle in a war that never ends. Believe me, you need something to carry with you every time you go into the fight. Something to hold on to, an edge that drives you or pulls you. And it was her hands that did it for me. I could not forget her hands. I believe they were reaching to me. I still do.

If you want to see how a master does it, I commend to you the novels of Michael Connelly.

And now my announcement. I have just released my second Mike Romeo thriller, Romeo’s Way. It begins this way:

IT WAS THE first Tuesday in March, the sun taking its sweet time fighting off the cloud cover and recent rains, when I saw the kid who wanted to die. 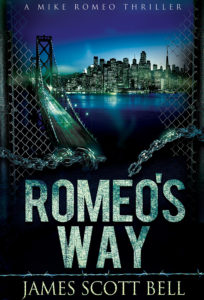 It can be ordered here:

To sum up: There are popular series where the character stays basically the same. Some of these are highly entertaining. I enjoy reading them. But when they’re done, I pretty much forget them.

That’s a high bar indeed. But as Brother Brooks put it recently, “The higher the bar, the sweeter the leap.”

So what about you? For those of you who are working on a series, do you give equal thought to the inner journey as well as the outer plot line?

20 thoughts on “Going Deep With a Series Character”