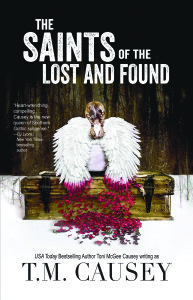 Note from Joe Hartlaub:  I am pleased to announce that I am relinquishing my blog post (but not my fedora) this Saturday morning to author, screenwriter, and certified wonderful person Toni McGee Causey. Toni initially grabbed the attention of the book world with her Bobbie Faye trilogy, a popular set of addictive books that defied genre classification. Her latest novel, the newly published The Saints of the Lost and Found, goes in a much darker direction, one which will please new and faithful fans alike. Toni has graciously consented to tell us two spellbinding and chilling real-world stories that describe how The Saints of the Lost and Found came to be, and to answer any comments and/or questions which you might have today as well. If you like the stories you read below, you should buy and read the book that they inspired. Please check with your local independent bookseller, and if they don’t have it, please ask them to order it.

Thank you so much, Toni, for sharing your talents with us this morning…SJ 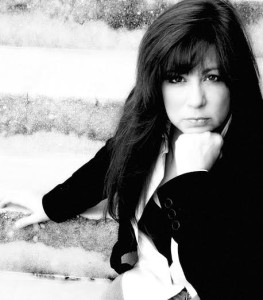 One of the most dreaded questions a writer can field is the ‘Where do you get your ideas’ question, especially with regard to longer fiction. It’s the kind of query that has a million answers, and often the author has no real clue how they put this idea with that one, stowing them somewhere in the crannies of their minds where the random ideas may bump and roll around until they become so entangled, they form a completely new idea. Or mess. It can work both ways. What makes this one better than that one? What makes this one the thing you knew you would use for a book, when there were a thousand other notions that seemed just as viable shunted off to the side, where hoarders even feared to tread.

This is the one time I feel like the kid at the back of the class who finally has an answer, who raises her hand with an “oh oh oh PICK ME PICK ME, I KNOW!” squeal.

THE SAINTS OF THE LOST AND FOUND is the story of a woman, Avery Broussard, who sees lost things. Glimpses, like photo snapshots, of anything (or anyone) someone has lost bombard her as she moves through life and interacts with anyone. Lost keys, a phone, cameras, money, love. A child. Imagine having that ability to know the condition that lost thing is in, and see it, but not always be correct. She can see something lost in a wheat field, but may not know which wheat field.

Now imagine… you have that skill and you’re trying to find a lost child… before a killer can finish his task… and you fail. One of your rare failures.

Avery fails… and runs… and the story starts with just what happens when you cannot outrun your own abilities, or the vengeance someone will take for your mistakes.

So, where did that idea come from? Two odd-but-true events that took place probably fifty years apart. The first happened to my dad. The second, to me.

My dad told me his story… and he’s not one to believe in anything extra-sensory. He swears it’s true. He and my Paw Paw had been hunting. My dad’s family were very poor, and if they didn’t hunt, they didn’t eat. This was back in the days of the Great Depression, and my Paw Paw’s three hunting dogs were prized because they helped most of the hunts be successful.

On one such trip, two of the hunting dogs returned, but the best one did not. My Paw Paw and Dad searched everywhere, and couldn’t find her. Dad was about ten years old at the time, and after they’d been searching futilely for a while, Paw Paw told him to get in the truck. They drove for about an hour (once they were out of the woods), far south of the property they’d been hunting on, and my Paw Paw pulled up to a very old house where an even older black man sat on a rocker on his front porch. His eyes were milky-white, the cataracts were so thick, he could not have seen who it was who’d driven up, and he had no phone. When Paw Paw got out of the truck, Dad was surprised that the old man started talking first—and knew who they were. Without anyone having said a thing yet.

“You lost a dog a ways back,” the old man said by way of intro, and Dad said his hair stood straight up on his head.

“Yep,” Paw Paw said, but didn’t elaborate as the old man turned his head and sort of stared out into the trees. Trees he couldn’t see.

He hummed to himself for a few minutes, kinda nodded as if figuring something out, and then said to my Paw Paw, “You know that river where you were hunting?”

“Well, about two miles west of where you were, the river forks. You know it?”

“Take the right fork, and go on down a ways, ‘bout a mile or so, and your dog’s hung up there in the barbwire fence.”

Paw Paw thanked him, promised him some food from the hunt, and he and Dad climbed back in the truck, heading the almost hour drive back to where they’d been hunting.

My dad’s not the kind of person who believes in woo-woo stuff, especially something like this, so he indicated he thought it was all a waste of time, but they found the fork in the river, veered to the right, and about a mile from the fork, the dog was hung up in the barbwire fence.

I probably would have dismissed the entire thing as completely far-fetched, except that it was my dad telling the story, he was sincere in his disbelief-until-he-saw-the-proof aspect, and I’d had enough oddball experiences finding things that other people had lost that I knew there could potentially be more at work than someone simply telling a tall tale.

For many years, I’d get flashes of where something was that I was looking for… I’d “see” it, and then sure enough, that’s where it was. I’d never thought much about it other than assuming I had simply probably memorized its location as I walked through a room—maybe something akin to a photographic memory—but I never assumed it was anything extraordinary beyond just memory, until one day, a friend was telling me about her mother’s lost high-heeled red stiletto shoe (her telling me was for a story reason), and as she talked about it, I “saw” the shoe underneath a very specific kind of porch.

I asked, “Does she live in a house that’s raised off the ground?”

My friend was a little surprised, and said yes.

I asked, “Is it a little higher off the ground than maybe normal… it has steps in the center of the front porch that lead up to the front door, and no railings?”

Then I said, “Well, I have this weird image of that red shoe. If she faces the stairs and goes to the left, behind the third pylon, there’s a depression in the dirt. The shoe is lying there. But it’s been chewed on by a dog.

My friend laughed, because her mother didn’t have a dog, but she said she’d ask her to look anyway.

How does that even happen? I have not a single clue.

That freaked me out. Plenty.

Not long after, a different friend, Julie, who lived in Arizona (and I lived in Baton Rouge at the time), was desperately looking for another friend, K, who’d left a suicide note. Many mutual friends had gone out searching, but K couldn’t be found. When Julie called me and told me what was happening, as she talked, I could see K… she was sitting by a large tree, eyes closed, having already died. Her white car (I didn’t know she had a white car) was parked nearby. I could sense water, but not see it, which was odd and I could also see a woman with a backpack leaning over K, not yet realizing that K had died.

I told Julie all of this. She was noticeably disappointed when she sighed and said, “Unfortunately, where we live, it’s a desert. There are no trees like that, and no water.”

And I completely understood–she was hoping for that magical solution, and I honestly couldn’t give it to her. It bothered me terribly to be so wrong, but it was a long shot anyway. I told Julie, “Ignore it then, it’s just an odd image.”

She called back four hours later, devastated. They’d found our K… two hundred miles north of where she lived, sitting on the bank of a dried river bed, leaning against a giant cottonwood tree. Her white car was parked nearby. A woman with a backpack who’d been hiking with friends had found her.

She’d only died about an hour earlier (Julie believed), based on a ticket she’d paid to enter the park. Witnesses would later confirm sightings of her when she’d parked and then gone and sat by the tree.

Aside from the shock and grief for the mutual friend, the entire conversation and ensuing discovery stunned me and if it hadn’t happened to me, I wouldn’t believe it. I wouldn’t blame anyone for not believing it. What was worse, I didn’t know what to do about it. Help people? How?

Not long after, I told a couple of people, and the first thing they did was ask me about something they’d lost. It was a near-instant reaction on their part, and sometimes it was something important, but sometimes it was something that had just eluded them and they were tired of being thwarted. Every time, I ‘got’ an ‘image’ that popped in my head. And I was almost always wrong about my guesses. I think my ratio of correct “images” to questions was so low, it probably needed multiple zeroes after a decimal point.

I didn’t mind being constantly wrong. It was a relief, actually, because the hope that people have when they are asking about something lost is palpable, and dashing those hopes, or seeing their disappointment, was equally brutal.

Which lead me to wondering… What if? What if you could do this for real… But you’re human, you’re not perfect, and you make mistakes? Would you go to the police? Would you volunteer? Where do you draw the line?

What if everyone wants your help? How do you have a life? Do you hide your ability?

What if a child’s life depends on it?

What if your own life does? Or someone you love?

Years after losing K, Avery was born, and I think she’d probably been there all along, from the first time I found something… or maybe even as far back as when my dad told me that story about the hunting dog.

And those what ifs kept piling up, pressing forward, begging to be answered until I could ignore the question no longer.

THE SAINTS OF THE LOST AND FOUND is not for the faint of heart. It’s a dark book, and it may break your heart, but it may also give you hope.

For me, it’s finally given me peace.

29 thoughts on “Where Do You Get Your Ideas?”