Writing a novel is gathering smoke. It’s an excursion into the ether of ideas. There’s no time to waste. – Walter Mosley

I don’t make New Year’s resolutions. Too much pressure heading into February, a month that’s usually so dismal that they limited it to twenty-eight days. But this year, I relented.
I made a vow to myself to change my evil ways. This is not easy to do when you have a Medicare card in your wallet.

I made a vow to write every day.

And I owe it all to Walter.

Now, if you’ve read my posts here, you’ve heard me try to defend the idea that you don’t have to write every day, that you can get away with taking a day or week — or even a year off — and still be successful.

Who was I kidding?

Maybe it’s because the older I get the harder the writing is coming. Maybe it’s because -– and I so want to believe this – that you don’t ossify as you age but stay open to new ways of running your life. But I have reformed. I now work every day on writing. And here is the thing that changed my thinking.

Every January, I start working on the Edgar Awards banquet. Kelly and I have chaired this event for ten years now for Mystery Writers and we love doing it, mainly because as our reward for volunteering, we get to mingle with some of the best in our business every April in New York. I’ve got to meet Stephen King, Donald Westlake, Sara Paretsky, James Ellroy, Robert Crais, Ken Follett, and countless other writers who’ve been nominated or won the Edgars. You don’t breathe the same air as the Grand Masters without coming away with a few insights. 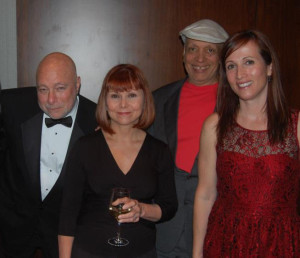 This year, the MWA Grand Master is Walter Mosley. I’ve been a fan of his books for years, and got to finally meet him two years ago when his book All I Did Was Shoot My Man was nominated for Best Novel. I also had the honor to be on an Edgar Symposium with him on the future of the PI, and he was very kind to this starry-eyed acolyte. As part of my chair duties, I have to help Kelly prepare his video tribute, so this month I’ve been researching everything he has to say on the subject of writing. 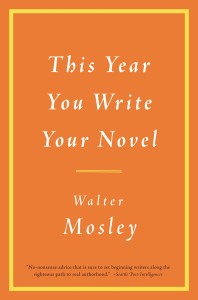 He’s got some great advice. Some of it comes in his 2009 book, This Is the Year You Write Your Novel. But the best stuff can be found in his videos. And it all boils down to his one credo – you must write every day.

“Writing is almost a place of dreams for me.”

That is Mosley talking about the subconscious. He goes on to talk about how the act of creating fiction necessitates that the writer enter a dream world and inhabit it fully. Not just visit whenever the kids are quiet and the dishes are done. Not just swing by for a quickie when the husband is off playing poker. And not just deign to show up if you feel like it.
If you want a reader to live in the world you create, you the writer can’t just rent that space. You have to own it.

Mosley believes that only through daily contact with your novel can you maintain the subconscious threads that will keep it alive. The constancy of entering that fictional world every day will force not just the process along (Yea! I just wrote THE END!) but will engender a richness and authenticity in your fictional universe that you won’t otherwise achieve.

I used to go days without writing then burn myself out writing in furious 12-hour sprints. I thought it was working, but what I didn’t realize was that in those days I was away, my characters’s voices were dimming to whispers, my settings were fading like old pastels, and my plot was drifting off into the blackest bayous.

Here’s how Mosley describes this stasis:

The first thing you have to know about writing is that it is something you must do every day. There are two reasons for this rule: Getting the work done and connecting to the unconscious mind. The process of writing a novel is like taking a journey by boat. You have to continuously set yourself on course. If you get distracted or allow yourself to drift, you will never make it to the destination. It’s not like highly defined train tracks or a highway; this is a path that you are creating discovering. The journey is your narrative. Keep to it and a tale will be told. Nothing we create is art at first. It’s simply a collection of notions that may never be understood. Returning every day thickens the atmosphere. Images appear. Connections are made. But even these clearer notions will fade if you stay away more than a day.

“Thickens the atmosphere.” God, I love that.

Now I am no angel. Decades of procrastination die hard. Sometimes old dogs can’t hear the call for new tricks, let alone do them. You guys undoubtedly have your own ideas on how to keep a daily pace and I’d love to hear them. Here are some of the things I do to force myself to return each day to my fictional world.

Sometimes just seeing your work on the screen gives you a jolt of confidence. Read that word count ticker-thing down in the left corner. Wow…I’ve made it to 43,034 words? Next thing you know, it’s an hour later and you’re up to 43,306.

Okay, your brain is bone-dry and you can’t face that sucky chapter 12. Open the damn file anyway. Do some rewriting. Even if you ignore sucky chapter 12 and go back and repave a pothole in chapter 6. Just the act of setting foot back in the fictional world will get you moving again. Or, as Mosley puts it:

One day you might read over what you’ve done and think about it. You pick up the pencil or turn on the computer, but no new words come. That’s fine. Sometimes you can’t go further. Correct a misspelling, reread a perplexing paragraph, and then let it go. You have re-entered the dream of the work, and that’s enough to keep the story alive for another 24 hours. The next day you might write for hours; there’s no way to tell. The goal is not a number of words or hours spent writing. All you need to do is to keep your heart and mind open to the work.

I know, I know…this is a siren call. But I have found this works wonders for me as a pump-primer. My WIP is about two unrelated cases: the discovery of two boys’s remains found in a box in an abandoned copper mine in Michigan’s U.P. and the murder, decades later, of a mega-church pastor hundreds of miles downstate. Stuck on a plot, I started researching religious ephemera about saints and discovered St. John Bosco – patron saint of lost boys. Bingo…the plot thickened. But don’t let research become a detour. Here’s Mosley on that:

There will be moments when you will want to dally over details. Do Georgia geese fly south in April or June? Is it physically possible for Bob Millar to hear the cult leader yelling from a mile away — even in a desert? Would the police arrest Trip if the women were allowed into the bar and were served by the owner? All of these questions are valid. Before the book gets into print, you should have the answers. But many writers allow questions like these to help them procrastinate. They tell themselves that they can’t go on until these questions are answered. Nonsense. Put a red question mark next to the place where you have questions and get back to it later.

Go for a  walk

Yesterday, I was working on a chapter where my hero Louis goes to the house of the dead pastor, after the place has been cleared by cops, just to see what vibes he can pick up on. My first draft was listless, filled with drab description. So I went to Google Street View, walked around Grand Rapids Michigan for an hour, and happened upon this house on Lake Reed. It was a modest clapboard Cape Cod cottage but it was dwarfed by the McMansions around it. Suddenly, I knew not just where the pastor lived – but how. The chapter now has a purpose, the scene has verisimilitude — and I have momentum. This technique worked for me best in our thriller The Killing Song, which is set in Paris. I had been to Paris ten times before writing it but I had never set foot in the city’s northern immigrant neighborhoods. A Street View tour of the shadowed streets of the 18th arrondisement gave me the insights I needed.

Write something else
Which is what I am doing right now. I am a daily runner, have been doing it for two decades now. But as I get older, my body is starting to object, so I make do with a long walk. So it is with writing. When you can’t face the run of your novel, open the laptop and start a short story, write a poem, start a journal. Work on your outline, if you use them. Just stay in the realm of the imagination somehow. Mosley again:

It is now Monday, almost three in the afternoon. On this laptop, on an alternate screen, sits my work in progress. I haven’t touched it yet, haven’t even looked at it. But at least I opened it. So, if you’ll excuse me, I have somewhere to go now.

Thank you, Walter. You can have the last word:

How can I create when I have to go to work, cook my dinner, remember what I did wrong to the people who have stopped calling? And even if I do find a moment here and there — a weekend away in the mountains, say — how can I say everything I need to say before the world comes crashing back with all of its sirens and shouts and television shows? “I know I have a novel in me,” I often hear people say. “But how can I get it out?” The answer is, always is, every day.