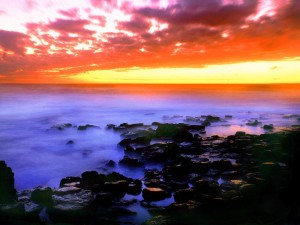 Pardon my posting a tad late this morning. I’ve been on quite the journey the past couple of weeks. We were scheduled to go to Maui last month, and we did go–but not before 1) I developed a major flu-like illness,; 2) I developed a severe eye infection that kept me from seeing well, which caused me to 3) fall down a significant flight of stairs, which rendered me black and blue on the left side from head to toe.

It was the head part of the bruising which caused the most consternation, travel-wise. I was forced to wear a low-brimmed hat and sunglasses, otherwise I looked like a domestic abuse victim, and people would be shooting my husband suspicious glances. The facial bruising did come in handy a couple of times, however. When we checked into the Westin 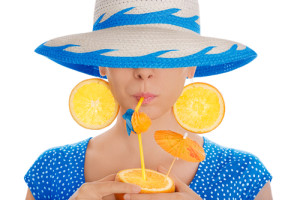 and were told all the ocean front rooms were booked, I removed my glasses, assumed maximum pathetic expression, and told them I was there to recover and I needed to spend the week looking out at the ocean. We were instantly upgraded to an ocean front suite. (Yes, I’m not above using whatever I can use to get what I want). We spent Thanksgiving seeing an awesome Elvis impersonator performance (he had an excellent voice and physical resemblance to Elvis, right down to the aging King’s paunch). 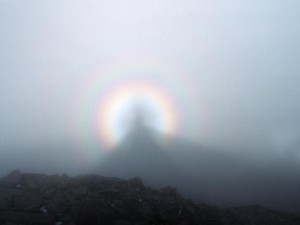 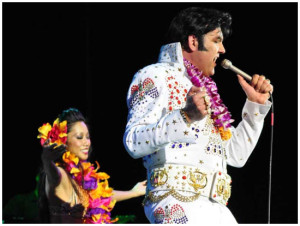 It turns out that Maui has some very posh urgent care facilities specifically for tourists, called Doctors on Call. I got to know the fine medical professionals there on a first name basis, especially after I made the insane decision to go up (and more importantly, down) the hair-raising ride to Maui’s volcano. The top of the that volcano is one of only three places on earth where you can see an optical effect known as the “Specter of the Brocken,”–which means, you can see your shadow cast on the clouds below, surrounded by a rainbow. (You can also occasionally catch a glimpse of the same effect from an airplane, when the plane casts its shadow on the clouds below. Look for it sometime.)  Seeing that view and surreal, moon-surface landscape was worth the trip, even if I had to pay for the trip by tossing my cookies nonstop for the next eight hours, until Doctors on Call reopened.

At some point during the trip I felt moved to look into the world of Hawaiian literature, which for practical reasons, includes book about Hawaii. I learned to my dismay that one of my oldie Nancy Drews, MYSTERY ON MAUI, is no longer available in hardback, only e-book now.) (Too bad, too–the hardcover had Nancy sporting a killer Babes On The Beach yellow bathing suit on the cover). Although there are wonderful books available by authors who are actually from Hawaii, my favorite book, and I believe still bestselling book of all time about those islands, remains HAWAII by James Michener. The book is episodic, with each chapter written from a different character’s point of view. The story culminates with a character the writer called “The Golden Man,” a person who is culturally and racially the result of the millenia of immigration to the islands. We met many such Golden People on our trip, 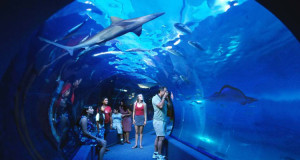 including the man who drove our bus on the volcano drive. He’d grown up in “old Hawaii,” part of a large family that made its living fishing and working in the sugar fields. After a stint in the Army, he’d been transporting tourists on that volcano drive for the past 25 years. And yet still he conveyed a sense of excitement as he described the Hawaiian culture, the history of the gods and tribes that founded human culture on the islands. He was able to convey the current challenges that Maui, and other islands face–threats to native wildlife by the encroachment of development, land prices that have risen from $100 per acre to $1 million in less than one person’s lifetime. Our driver was a mixture of native Hawaiian and some European background. That’s important in Hawaii, because you have to have a minimum percentage of “native” Hawaiian ethnic background in order to qualify for some generous educational and civic opportunities that were set up specifically for Hawaiians by one of the original island queens. Our bus guide was a perfect ambassador for educating visitors about the New Hawaii. I believe he may have been the embodiment of Michener’s “Golden Man.” 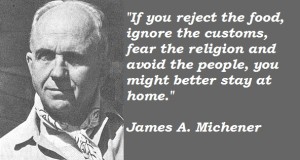 So, have you been traveling during the holidays? Enjoying life at home? Either way, what book or series best represents the place you’re visiting, or the place you call home?