Many years ago, I took my son to see David Copperfield, one of the world’s greatest illusionists. During the over two hours of magic, Copperfield performed a number of mind- 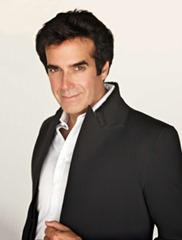 bending feats that astounded the audience including walking through a solid wall. Remember, this is the guy who made the Statue of Liberty disappear, so he kept us on the edge of our seats with every trick.

One trick in particular was not as spectacular as making a jet plane vanish, but it made a lasting impression on me that I refer to often as I talk about writing thrillers. It involved Copperfield standing solo at center stage performing some entertaining but basic card and slide-of-hand tricks. It was sort of a breather from the “big” illusions. A few minutes into his routine, someone started heckling him from the back of the theater. A man shouted that the tricks were easy and took no talent. At first, Copperfield tried to dismiss him with a remark that he was glad the stranger was interested in magic. He then went on with the card trick. The heckler called out again, this time louder, saying that Copperfield was a third-rate magician with no real talent, and that anyone could do the famous illusionist’s act.

At this point, the audience started to turn to see who this disrespectful, loudmouth was. What we all saw was a man in a heavy trench coat, pulled down fedora, and a thick beard moving slowly down the aisle toward the stage. I surmised that this was obviously part of the show, but to what end I had no idea.

The comments coming from the heckler grew louder and more boisterous as he claimed that he could do anything Copperfield could. The exchange grew edgy between the magician and the heckler until Copperfield seemed to become so frustrated that he challenged the man to come up on stage and perform a trick that would astound the audience. He then turned and left the stage, giving it over to the bearded man in the trench coat.

As my son and I watched in breathless anticipation of what would happen next, the heckler took center stage and declared that he was about to perform an illusion worthy of David Copperfield. In an instant, he ripped off the fake beard, tossed the hat away, and slipped out of the trench coat. The audience gasped as we all realized the mystery man was in fact, David Copperfield.

I consider that trick the basis for writing thrillers. Because, isn’t every writer of this genre a magician? All great magicians know how to deal with pacing, timing and danger. They know how to pivot from one direction to another and the art of misdirection. They keep you guessing where they will go next, and when you think you know the answer, you wind up being wrong. They make you want one thing, then give you another. They prey upon your fears, your dreams, and your nightmares. They are illusionists. They create magic.

As you write, think of yourself as a magician performing illusions. Know where your reader thinks you’re taking them, then take them somewhere unexpected. For writing, like magic, is all an illusion. 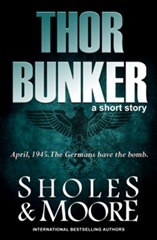 April, 1945. The Germans have the bomb. Download THOR BUNKER, A Short Story prequel to THE TOMB for only 99¢.

21 thoughts on “It’s All An Illusion”