I know some artistes rebel at the idea of systematization. But if the system is designed to unleash your imagination and send it running in productive directions, I say go for it. All the time.

You don’t want to be sitting around waiting for a Muse to start dancing.

Before I can begin to write anything, I have to know who my story is about. I’ll have a concept. I need a character. A Lead.

So I’ve come up with a 30-minute character generator. It’s a system. It gets me excited enough to start on that story journey. The system is made up of three things: a visual, a voice, and a vision.

Start with a look. For me, a character does not begin to take shape until I can see him.

I want to look at my character’s face and see some mystery and a suggestion of stuff happening below the surface.

There are two things I do.

First, I spend several minutes on the internet looking at images. I find a few that set something off in me, drag them to my desktop, and look at them later.

I use Google Images. I find it has more variety than, say, iStockphoto. Since I’m not going to be using these except for my own reference, there’s no copyright issue.

When I put in a search term, I use an emotional tag rather than something generic. Here’s what I mean.

Let’s say my Lead is a successful businesswoman. If I just search for “businesswoman” I get all sorts of publicity style photos––smiling, confident and posed. Nuts to that.

My novel is a thriller, so I want my Lead to be troubled.

Thus, I might type “unhappy woman” or “stressed woman.” (You’ll notice that when you do this, Google Images suggests other types of searches in their top bar. Nice of them to help!)

Find faces that stir something inside you. The best is when you think “Aha! That’s her!”

The second thing I do is use my love of classic movies to think of my Lead being played by any actor from the past I choose.

For my businesswoman, suppose I think of her as Bette Davis? Or Kate Winslet?

If I like that, I can always find a head shot of that actor and use it for my model. The reader will never know.

I usually find my headshot in under ten minutes. Then I put it into my character file on Scrivener. The nice thing about Scrivener is that you can look at all your characters on a corkboard when you’re ready to roll.

Next, I spend at least ten minutes creating a Voice Journal. This is a free-form document in the character’s voice, talking to me. Sometimes I prompt the character with questions. Other times I let the character ramble.

I just keep typing until the character sounds like someone other than me.

Which is the key. This is where the character begins to “take on life.”

Here is a bit of the Voice Journal for Sister Justicia Marie, the Lead in my Force of Habit series:

I don’t go around looking for bad things to happen. They just seem to. Yes, I live in L.A., I know all about it, oh yes, you know my story. I was supposed to be living the dream. I was making five million a picture when I was ten. Somebody told me I was the new Shirley Temple and I 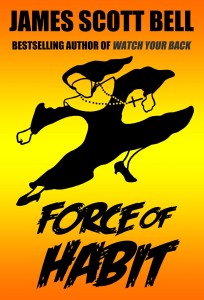 looked at him and said, “That curly-headed little snot can eat my shorts.”

But now am I in the grip of another sin? Am I wrong, my Lord, for wanting to stop bad thing from happening? Even if I have to kick in somebody’s face?

Are you calling me, Lord? Am I Joan of Arc or Joan the crazy lady who shouts in the park?

Ten minutes of voice journaling always brings happy surprises. I may continue to add to this journal from time to time during my writing or planning, fleshing out more of my character if I see the need.

Finally, I want to get to the heart of my character. I want to know what the character thinks most deeply about as the story begins. What is her trajectory? Her yearning? Her vision for her life?

No character in your novel should start as a blank slate.

We know that Luke Skywalker, like most farm boys, yearns for a life of adventure. He looks out at the sky, dreaming of becoming a Jedi. But the practicalities of life with his Aunt and Uncle prevent it.

Scarlett O’Hara’s vision is to become a fine, Southern lady married to a noble Southern gentleman named Ashley Wilkes. Boy, is she in for a shock.

The vision is not always a pleasant one. Katniss Everdeen in The Hunger Games sees no hope in the future. Her vision is for survival in the daily, dismal world of Panem. Her daily life is taken up with the care of her mother and sister. She tells her friend Gale she never wants to have kids. Will anything in the story change her outlook?

Spend ten minutes exploring your Lead’s vision just before your story begins. Ask yourself how the story will frustrate, challenge, or redeem the vision.

You can do this same 30-minute exercise for your other main characters, too.

The result will be a full-blooded cast. You can start writing now, letting the characters grow organically. Or you can do more planning and backstory if that’s your preference.

Either way, the 30-Minute Character Generator will give you a solid foundation for bringing original, unforgettable characters to your novel.

Which is kind of a nice thing.

27 thoughts on “The 30-Minute Character Generator”