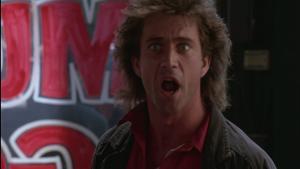 Got an email from a writer which asked the following (used by permission):

Ok, so I’m big on stupid questions. I just had a thought as I was musing about my latest book. I know the main character has to change. That’s a big deal. But what about secondary characters? What about the bad guy? Do the secondary characters change, but less? or something… And I want the bad guy to go from neutral to really bad… Does that make sense? Not something I can google…

First off, that’s not a stupid question at all. In fact, it’s a great question with good instincts about the craft. Here are my thoughts on the matter.

The Main Character Can Change in Two Ways

In my book, Write Your Novel From the Middle, I explain that not all MCs have to change from one state of being to another. That kind of arc is, of course, common in fiction.

For example, Ebenezer Scrooge. He starts out as a misanthrope and ends up a generous, compassionate member of the community. Martin Riggs, the suicidal cop in Lethal Weapon, changes from self-destructive loner to close friend of his partner, Roger Murtaugh, and Murtaugh’s whole family.

This type of change comes only through the fire of Act II. A life lesson is learned. Now the MC is a new person with something of value for the community. As my friend Chris Vogler puts it, the hero returns home with an elixir: he has new wisdom and insight to share with his ordinary world.

Of course, as I also note, the MC can change in the opposite direction. Michael Corleone goes from a loyal American soldier to the soul-deadened Godfather of the Corleone family. That’s because in Act II his father is nearly killed by members of another crime family. At the crucial “mirror moment,” Michael realizes he’s the only one of the three brothers who actually knows how to exact revenge. Thus begins his negative slide.

In this type of large-scale change, the MC goes from pole to pole.

But that’s not always how a character changes. There’s another way. That’s when the MC retains the same basic nature, but grows stronger because of the life-and-death challenges of Act II.

An example is Dr. Richard Kimble in The Fugitive. He’s the same decent man at the end as he was at the beginning. But he has had to learn survival skills. He is forced to grow stronger because he was wrongly convicted of murdering his wife. When he escapes from a prison bus, he has to stay alive and out of the law’s reach so he can find the real killer. 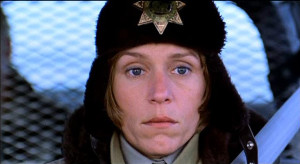 Marge Gunderson, of Fargo, is the same decent, small town police woman at the end as at the start. But she has to ramp up her skills to bring a vile murderer and a devious scam artist to justice. This is not like the misdemeanors she’s used to!

So consider what kind of change your MC is going through: change of nature, or growing stronger?

Also consider this: A character can resist change. He can be “offered grace” (Flannery O’Connor’s term) but turn it down. That’s what makes for tragedy.

In Act IV of Othello, Emilia, Desdemona’s attendant (and, unfortunately, the wife of Iago) pleads Desdemona’s innocence to Othello in no uncertain terms. But when she exits, Othello mutters that she is a “subtle whore” and refuses to believe her. He kills his wife instead.

Finally, change can come too late, which is also tragic. Think Scarlett O’Hara in Gone With the Wind.

A powerful trope is the change of secondary characters, brought about by the courage and example of the MC. 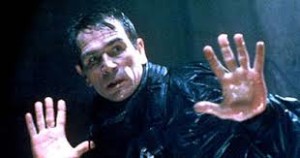 Here is where The Fugitive elevates above most action films. The opposition to Richard Kimble is Sam Gerard, the lawman played by Tommy Lee Jones. He makes it clear early on he has only one job: catch Kimble. When Kimble has a gun on him and insists he’s innocent, Gerard says, “I don’t care!” Because it’s not his job to care. At that point Kimble thinks, “Oh, crap” (my interpretation of Harrison Ford’s facial expression) and so he dives off that spillway and goes kersplash in the waters below.

But observing this, and other behaviors of Kimble––as well as seeing what a lousy job the Chicago cops did on the original investigation––Gerard does begin to care. Until, at the end, he helps Kimble get the real bad guy.

Another example is Louis, the corrupt French police captain in Casablanca. Watching how Rick gradually begins to take sides against the Nazis, Louis finally finds his conscience at the end, letting Rick off the hook for murdering Major Strasser. To the arriving police force Louis says, “Round up the usual suspects.” Not only that, Louis walks off with Rick to join the war effort. It is “the beginning of a beautiful friendship.”

This kind of change enhances the theme of a story. We like to see things like justice and honor prevail. When they do, it ought to be powerful enough to inspire secondary characters, too.

There is no reason at all you can’t show a villain growing more villainous as the story moves along. You can show this via parallel plotline from the villain’s POV, or you can utilize it as the “shadow story,” which I wrote about here. What happens off screen with the villain? How is he altering his plans, ignoring his conscience, falling further and further from his humanity? Give it some thought and weave that material into the narrative as you see fit.

A plot is about a character who uses strength of will against the forces of death––be they physical, professional, or psychological. No one goes through such a crucible without changing or becoming stronger.

It’s your job to show us the change and make us glad we stuck around for a whole book to see it.

What are some of your favorite examples of character change?

32 thoughts on “How Should Characters Change?”