Please allow me a bit of shameless self-promo, because it involves Kevin Costner. No, he’s not contacted me about filming one of my books (though he should). It’s about one of his older movies. Stay with me. 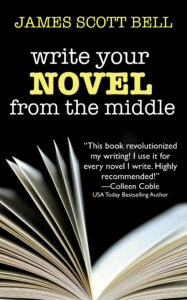 Earlier this year I put out a book called Write Your Novel From the Middle. In it I describe what I call the “mirror moment,” a powerful beat I saw happening in the middle of solidly structured movies and novels. It has since become the basis of all my plotting, and seems to have helped many other writers, too. For example, here’s a recent email I received (used by permission):

Hi James,
I own so many of your books, so I want to email you about a small epiphany I had. I recently bought “Write Your Novel From The Middle” and, jaded as I am about writing books, read it with some interest but not much conviction.
Two weeks later, I’m elbows-deep in the guts of a novel I wrote 7 years ago, and cutting. I mean, I’m slicing and dicing like Freddy Krueger, blood and guts everywhere. I took 20k out of a 127k novel.
And there was that weird passage where my main character has a health crisis (he essentially screws up his immune system from overwork, but he thinks it’s something worse) and basically lies flat on his back in his bedroom, waiting to die.
And he realizes that due to the path he’s chosen, he’s completely alone on the planet, in London, and nobody cares if he lives or dies. It’s a moment of great weakness, self-pity and the existential crisis that propels him – once he gets better – to really work that human interaction, make friends, network. (He’s in finance, so being good with people is important). Long story short, I really gutted the book, cut that scene down by at least half, and some editors said I should cut it entirely, but for me it was weirdly important. It felt powerful, and it wasn’t the typical “kill your darlings” kind of vanity on my part. I knew it was important, so I only condensed it and kept it in place.
The book then went to layout. It was exactly 400 pages in PDF.
Guess where that scene fell? Pages 202 and 203. If you take out the front matter/cover, it’s SMACK BANG in the middle.
I admit I guffawed.
Thank you for putting your writing advice out there. You definitely blew my mind this time.
All the best,
Aleks

The reason I share this is that this writer’s reaction is one I continue to experience in my own writing as I utilize the mirror moment and writing from the middle.
Now, on to Kevin Costner.
A few months ago my wife wanted to watch the thriller No Way Out with Costner and Gene Hackman. We hadn’t seen it in ages, so I got the DVD from Netflix and popped it in the player.
Halfway in there’s a critical scene involving Hackman and Costner. I paused the DVD. I looked at the counter. We were in the exact middle of the movie.
I turned to my wife and said, “Kevin is about to have his mirror moment.” I did not know what it was going to be or how it would be shown. I just felt it was coming.
My wife looked at me the way Jack Palance looks at Alan Ladd in Shane when he says, “Prove it.”
I started the film up again. And this is what happened next:
I stopped the movie and smiled at my wife.
She said, “Don’t let it go to your head.”
If you were writing this scene in a novel, you would give us the inner thoughts of the Costner character. He’s thinking along the lines of, “This is too much. I’m dead. There’s no way out of this…” That’s one of the mirror moment tropes. The other is a reflection on questions like, Who am I? What have I become? What must I become?

It’s my contention that knowing your book’s mirror moment illuminates the entire novel better than any other single technique. And the great thing is you can do this at the beginning, middle or end of your draft. You can use it whether you’re plotting or pantsing your way through.

Anyway, I had to tell you about the Costner thing. Thanks for indulging me. Write well and prosper, my friends! And may the mirror be with you.
So here’s today’s question: What’s your favorite Kevin Costner movie?

40 thoughts on “Revisiting the Mirror Moment”