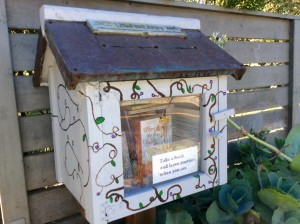 I spotted the Little Free Library in our new neighborhood long before I started using it. Now I’m wondering why I waited so long. The first time I opened the door to peruse the book selections, I was pleasantly surprised to see titles by some of my favorite authors, such as Crichton and Clancy. The Little Free Library has also introduced me to books I probably wouldn’t otherwise have read. I’m always eager to see which new reads my neighbors have dropped off.

But not everyone is a fan of the miniature libraries, apparently. According to a recent article in the LA Times, “Little Free Libraries on the wrong side of the law“, the city threatened to remove one LFL after receiving an anonymous letter of complaint. The city of Shreveport, Louisiana is also cracking down on the curbside book exchanges for violating zoning laws. (Although one enlightened city councilman has proposed an exemption specifically for LFLs).

Other than the Crabby Appleton who penned the complaint letter, I think most people would agree that a Little Free Library is a positive addition to any neighborhood. But the LFLs may need a little help from the rest of us. For example, we can use social media to let city officials know that voters won’t think kindly of anyone who harasses, fines, or otherwise threatens the continued existence of the little libraries.

Little Free Libraries are worth saving, don’t you think? Do you have one in your neighborhood, and have you used it?