My husband sends me strange links and records off the wall TV programs for me because he knows how I think about story inspiration. Sometimes a news story could fill out a back story of a character or become the main action or mystery behind a book. Recently he sent me this LINK. This story came from Associated Press reporter Sean Murphy. Who doesn’t love a cold case murder mystery?

Especially one that has a double twist.

You would think that discovering the skeletal remains of three teens (who were thought to have run away in 1970) in a rusted car at the bottom of a lake would be interesting enough. How did their car end up in the lake? Why weren’t they found until now? Rumors had run rampant. Locals speculated that the three teens had stumbled upon a drug deal at a rural airstrip and been killed with their bodies dumped, never to be found. Some folks thought the kids ran away to California, never to be heard of again. Most people who knew the kids suspected foul play, but leads went nowhere.

Police found a vehicle (a 1969 Camaro believed to belong to one of the missing kids) while conducting a routine diver training exercise at Foss lake, 100 miles west of Oklahoma City. Score one for the home team. But if that wasn’t enough, the over-achievers found a SECOND car, containing two to three more bodies. (Ew, that they don’t know if they have two or three bodies. That doesn’t mean poor math skills. It could mean they only have “parts.”)

All the skeletal remains are likely connected to missing persons reports that are still open and unsolved. Unrelated, presumably. The teens were on their way to a high school football game and went missing in 1970. The second vehicle, thought to belong to John Albert Porter, most probably carries the remains of another man and a woman. The grandson of Porter feels certain the find solves the case of what happened to his grandfather.

The bones were sent to the Medical Examiner’s office for determination of cause of death. You can’t just presume drowning, but without flesh on the bones and with all the abrasive sediment, that can’t be an easy job. If the bodies can be identified, that could give six families closure. 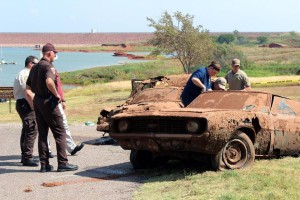 But a writer can conjure all sorts of other explanations for a story like this one. Who would’ve wanted to see the kids dead? What had they witnessed? With two cars in the lake, who was using the red dirt lake for a body dump site? Without the flesh on the bones, what if someone in the area was harvesting organs to sell on the black market?

So what do YOU think happened? How would you spin this emotional gut wrenching story for the two vehicles?

27 thoughts on “A News Story with Book Inspiration Potential”