This past week I began the launch of  BLIND JUSTICE, a legal thriller.  It first came out over a decade ago, and now by the magic of rights reversion and self-publishing, it’s available again in digital form and print. 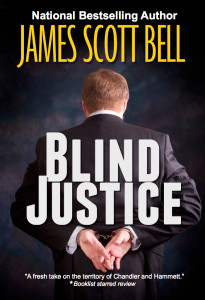 Amazon U.S.
Amazon U.K.
Barnes & Noble
Kobo
Print Version
So here we have a promotional post about a book launch. If you have a blog, it should obviously figure into your marketing plan. But don’t just make it about the sale. Have your post do “double duty” by offering something else of value.
Like talking about a malady that seems to be striking more and more writers each week: Obsession Promotion Disorder. There is a fine line that runs between healthy marketing and OPD. To be a well-balanced and productive writer, you’ve got to stay on the right side of that line.
How can you tell if you have OPD?
1. You wake up in the morning and your first thought is about your rankings.
2. You’re constantly disappointed by your rankings.
3. You refresh your Amazon book page every hour.
4. You spend days playing Algorithm Ping Pong (that is, trying to game Amazon’s system with compulsive tinkering, checking, tinkering, checking).
5. You spend more time on social media than you do on your next book.
6. The time you do spend on social media is overweighted with “buy my book” messaging.
7. You believe there is one “golden key” that will make your book go viral, and you look for it constantly (the King Solomon’s Mines Syndrome, or KSMS).
8. You tune out of conversations with your loved ones, who ask you what you’re thinking, and to whom you reply, “Oh, nothing,” when all the time you know what you’re thinking about — promotion.
9. You believe that promotion can override weaknesses in your book (this is a sign of HOPD: Hyper-Obsessive Promotion Disorder).
10. You believe that promotion is the true secret of both instant and long-term success, so you pursue it with a passion that leaves no time for studying the actual craft of writing.
OPD needs to be treated, and it starts by understanding that the best, most thought out, most “gamed” promotional effort in the world only gets you an introduction.
We used to have this gal in L.A. named Angelyne. All of a sudden, all over town, there were huge billboards of this blonde minx in a come-hither pose. There was one word on the boards, Angelyne, and that was it. 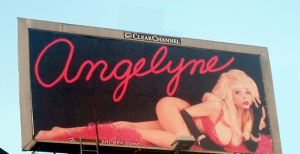 Everybody was asking, Who is she? She has to be somebody, because, well, she has billboards!We were all waiting for the big reveal (ahem) of Angelyne and her talent.
Never happened, because Angelyne really didn’t do anything. She apparently had some backer (or a stash of her own money) to pay for the billboards. So what was the point of all the publicity? It got her attention, all right. But nothing ever came of an Angelyne career.
So, writer friends, you can push all the promotional buttons you want, but if the book doesn’t deliver the goods for a large swath of readers, it’s all for naught.
Your time would be better spent early in your career in an intensive, all-out effort to learn and practice your craft. Go to classes, read good books (see this starter page), head to a conference, write a quota of words every week and get feedback on those words via a critique partner or group or a good editorial service, like Writer’s Digest 2nd Draft.
When you finally get something published, spend no more than 20% of your time marketing. Maybe even less after the book is launched. Spend 80% or more of your thinking, training, planning and producing time on writing. (This 80/20 rule applies, BTW, whether you are self-published, traditionally published, or both).
Write this down and post it somewhere: The only sure way to “game” the system is to be a good, solid, dependable and consistent producer of new work.
Yes, of course you need to put a promotional plan in place. You should have a crisp, easy to navigate website which includes a place for email signups for your non-intrusive updates (they are non-intrusive, right?)
You should specialize in one or two social media platforms (and learn how to use them without being a boor). You should know your way around your Amazon author page. You should make an informed decision about using KDP Select or not (and, once the decision is made, quit obsessing about it). And so on.
But make it as much a “turn-key” operation as you can. Adjust it from time to time, but keep it largely on auto-pilot.
Then spend the vast majority of your time becoming and remaining a great writer. That is not a matter of slapping words down, getting a killer cover and then promoting like a madman. It’s a matter of writing with craft and purpose, over and over. It’s about learning how to please readers with the thing they actually spend money on: your books.
What about you? Have you ever showed any signs of OPD?

26 thoughts on “Do You Have Obsessive Promotion Disorder?”