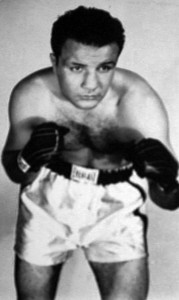 Jake LaMotta, the middleweight boxer who was the subject of the Martin Scorcese/Robert De Niro film, was known as the Raging Bull. He’d never stop coming at you, and he simply would not go down.
No matter what punishment was rained upon him (most savagely by Sugar Ray Robinson), Jake LaMotta refused to be knocked out.
Sort of like the traditional publishing industry.
I mean, look at the beating trad publishing has taken in the last few years:
BAM! The Kindle.
BOOM! Amazon offers authors 70%.
WHAM! Barry Eisler turns down half-a-mil from St. Martins.
SMACK! Department of Justice.
OOMPH! Borders goes under.
BOP! Barnes & Noble brick-and-mortar stores on the ropes.
Traditional publishing is reeling! Cut! Blood is on the canvas! The referee steps in to see if he should stop the fight. “How many fingers am I holding up?”
“You’re holding up big six fingers. No, five…” 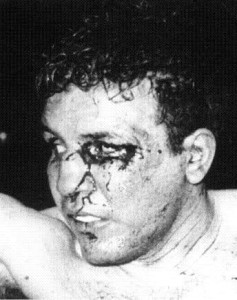 The referee lets the fight continue. We’re in Round 6 of a scheduled 12 rounder. Will traditional publishing avoid the knockout?
That was the question on everyone’s mind at the Digital Book World Conference in NYC last week. Reports are that the publishing executives who attended were remarkably “upbeat” about the future, even as it remains an uncertain and challenging one.
According to a commissioned survey of 53 publishing executives, 85% of respondents were “optimistic” about the digital transition and 64% say publishers are “capable of competing” in the new digital marketplace. A 55% slice were confident that their own companies can compete. However, both of the latter two figures are down 10% from the same survey last year (source: Publishers Weekly). From the same PW story covering DBW, key executives “offered perspectives that ranged from an enthusiastic embrace of the new technology . . .to being a little bewildered over selling direct.”
Direct! That is one of the key areas where publishers must learn to compete. But according to Marcus Leaver of Quarto Group Publishing, “We sell directly to consumers, but I’m not sure we’re good at it or ever will be good at it.”
Former Macmillan president Brian Napack, now a senior advisor at Providence Equity Partners, was interviewed at DBW about trad publishing’s future. While admitting that the former “big six” may well end up as the “big three,” he believes “the power of innovation often flourishes in markets during periods of consolidation and new companies.”
That last prognosis is the one we’re all waiting to see show up. Traditional publishing is unsteady on its feet right now. It’s wiping blood from its eyes. But it’s not down for a ten count.
What will it have to do to survive and, perhaps, thrive again? At the top of the list has to be substantive responses to the needs and concerns of their sole asset: writers.
Reports are mixed on whether, as a whole, trad publishing is getting that message. A surveyof 5,000 authors — aspiring, traditionally published, self-published and “hybrids” (those who are both traditionally published and putting out a self-publishing line) – reveals the following:
One-third of traditionally published authors are interested in self-publishing their next book. Writes DBW online: “This trend should be worrisome for traditional publishers, which are struggling to demonstrate to the marketplace that they add value to the publishing process in an era where anyone can publish a book.”
That’s the key: Add value. Where does that come from? It used to be via distribution to physical bookstores. But as shelf space dries up, how will that advantage compare to the digital platforms that writers are perfectly able to exploit on their own?
The survey did reveal a spot of good news for Jake LaMotta: Not yet published authors hold a high opinion of traditional publishing, showing the “prestige factor” still remains. Publishers can build on this. But it will require some significant changes in practice, as indicated by the responses of those who have been published traditionally:
While outsiders who probably have among them the next generation of best-selling authors believe that publishers can help them and have fairly high opinions of publishers, those who have experienced both publishers and the alternative have a very low opinion of publishers, by comparison.
Perhaps it is because those authors who have both self- and traditionally published are unreasonably bitter as a group by some slight they experienced at the hand of a publisher. Or perhaps they have made a reasoned comparison of what the publishing industry offered them and what self-publishing offered them and were more satisfied with the latter. Either way, it would suggest that traditional publishers could do more to woo and impress published authors.
The good news for publishers is that aspiring writers still believe in their ability to help them. It’s not too late for publishers to improve their services to authors to attract and retain the next generation of best-selling authors.
So will this Raging Bull of industry still be around in twenty years? I think so. I’d like it to be. I’m a hybrid, and traditional publishing’s been good to me. But it will have to fight smarter, not just harder. (One comment made by an editor at DBW shocked the binding out of me. He said at his company “there are 42 people who have to touch a book to get it published.” Unless he was kidding, or answering the ultimate question of Life, the Universe and Everything, that is not a recipe for fast feet and effective counter punching.)
So consider me sitting at ringside, shouting, “Cover up! Watch his left! Work the body! The body!”
What are you shouting to the traditional publishing industry?
Jake LaMotta, by the way, is 89 years old. And he’s still on his feet. 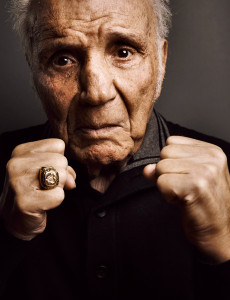 21 thoughts on “Is Traditional Publishing the Raging Bull of Industry?”