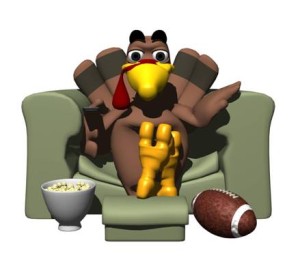 Clare’s excellent post on Monday discussed what not to blog about. I thought I’d add an addendum to that, based on something I read recently about employers Googling prospective employees and checking their Twitter and Facebook feeds. It got me thinking about crafting an online persona, and how the list of “do’s” and “don’ts” is basically the same as our family’s Thanksgiving dinner table commandments.

I don’t know about you, but we have a wide and varied mix of relatives huddled around the turkey every year. There are aunts and uncles who define themselves as Tea Partiers, liberal cousins who spent a significant chunk of the past few months hunkering down at various Occupy demonstrations, and everything in between. To maintain the peace and insure that stuffing doesn’t start flying across the table, we established these groundrules:

In a world where we live increasing portions of our private lives online, the line between what gets shared and what doesn’t has become blurred. It’s remarkable that some people tell utter strangers tidbits about their inner thoughts and prejudices that they probably wouldn’t share with close friends. Many people mistakenly believe in the illusion of anonymity, assuming that a post about the awful mistake you made last night will soon be forgotten. The truth is, years from now that same nugget could be unearthed, with embarrassing consequences.