First, a huge thank-you to everyone who responded to Amazon’s “daily deal” promo yesterday and downloaded the e-book version of my newest thriller THE PHOENIX APOSTLES. It quickly became the #1 bestselling Kindle book on Amazon. I hope everyone enjoys it. Let me know what you think.

And now back to our regularly scheduled blog . . .

OK, so most of the time we expect the bad guys to get their just rewards in the end. We

can all think of a million examples like the Wicked Witch melting to the cheers of the crowds. But what about killing everyone including the heroes? What about ending it  for all concerned and leaving no survivors?

Why would a writer eliminate all the main characters? Think it’s rare? Think Shakespeare. He was big on killing off the 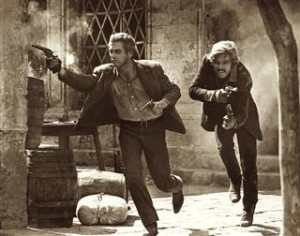 entire cast. Let’s look at the movies for a second. Think The Wild Bunch or Butch Cassidy and the Sundance Kid. How about The Godfather or Gladiator? Not too many walked away from those stories unscarred.

Writers, have you ever killed off the whole cast, good and bad? Do you hesitate killing off someone the reader cares about? After all, killing a character, especially one that the reader is attached to can add great emotion and momentum to the story. But killing a character without a very good reason could kick the reader right out of the story. It can cheapen the blow of the death if there is no reason for it, and leave the reader feeling dissatisfied. Obviously, there must be a good reason to do it. Is it something you avoid?

Readers, have you ever read a book where the good and bad guys bit the dust? Did you feel satisfied?

So which is it? Curtains for everyone, or leave a few standing?