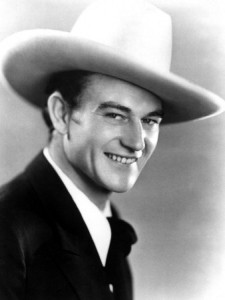 If you’re going to be a writer, I mean really take this writing thing seriously, you’ve got to continue to grow. Purposely. Planned out. Find ways to get better. Read books (not just for pleasure, but to see what other writers do), comb through writing books and Writer’s Digest, try stuff, take risks. The alternative is to stagnate, and who wants that? In any endeavor?
I thought about this recently as I watched some of John Wayne’s early movies via inexpensive (translation: cheapie) DVDs. John Wayne was not John Wayne when he started out. (Actually, his real name was Marion Morrison. How long would he have lasted with that moniker?)
After working as an extra for a couple of years, this former USC football player was, at age 22, plucked from obscurity  by director Raoul Walsh for a big budget Western, The Big Trail (1930). The movie flopped, and Wayne spent the next nine years making low budget westerns for studios on what was called “Poverty Row” in Hollywood.
The poorest of these studios was an outfit called Lone Star. Here is where we see John Wayne trying to find himself as an actor. It was a hard search, especially when he was stuck in such poorly written, clunkily acted, one hour oaters. Pictures like Riders of Destiny  (1933), where he was billed as Singin’ Sandy. (That’s right. John Wayne as a singing cowboy! Only his singing was dubbed – badly – as Wayne pretended to play the guitar – badly.)
Wayne’s acting here was wooden and uncertain. The only direction he seemed to get was to smile a lot, and that got a tad creepy. This was one forgettable actor.
But by 1936 he had moved one notch up, to Republic Pictures. In Winds of the Wasteland, for example, he seems like a different actor. Here is the real John Wayne. His acting is understated and sure. He’s even started walking that famous walk.
What happened? Wayne made a decision to grow, to get better. A lot of credit for that apparently goes to the legendary stuntman, Yakima Canutt, a real “man’s man” back in the day when that was an okay thing to be. Wayne copied Canutt’s low, confident way of speaking, and his walk. And he stopped smiling all the time.
Wayne was also befriended by an old character actor named Paul Fix, who gave Wayne acting tips, including the admonition not to furrow that famous brow so much.
The results were promising. Wayne learned. He grew.
Still, Wayne would probably have remained a B actor all his life (maybe he would have had a TV show like Hopalong Cassidy in the 1950s) had it not been for his friendship with John Ford. When the famous director wanted to make a Western in 1939 called Stagecoach, he got resistance (Westerns weren’t in vogue). When he insisted that Wayne play the Ringo Kid, he got turned down flat. But Ford wouldn’t budge, and eventually put a deal together with an indie producer. His going to bat for Wayne was what made him a star. 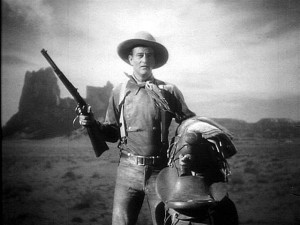 Wayne as the Ringo Kid in Stagecoach
But Wayne didn’t stop there. Though he never would be mistaken for Brando or Olivier, he did reach down for extra in movies like Red River (1948), She Wore a Yellow Ribbon (1949), Sands of Iwo Jima (1949, Academy Award nomination), The Searchers (1956), True Grit (1969, Academy Award for Best Actor) and The Shootist (1976), his very last film.
And of course, John Wayne became an icon, still ranking as a favorite movie star worldwide.
So, if you want to make a mark as a writer, you grow. Consciously. That doesn’t bring any guarantees. John Wayne himself needed a couple of lucky breaks to get to the heights he enjoyed. But he made himself ready, as you should.
So, do you have a plan in place to improve your writing? For the rest of your writing life? If you don’t, why not start now? (If you need some nudging in that area, I have some suggestions for you in my book, The Art of War for Writers.)
What’s your plan?

9 thoughts on “Growing as a Writer”