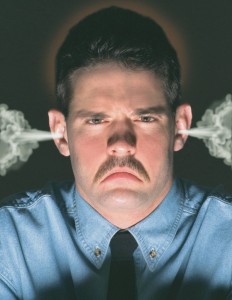 The first time I heard Lee Child speak, he discussed how he reacts to his editor’s comments on each manuscript. Lee claims to initially go “incandescent with rage.” He closes the email, fumes for a bit, then goes back and reads it again a day or so later. And the second time, he sees some of what the editor is talking about.

I think this is a common reaction of writers everywhere. How dare someone criticize your baby? Clearly they just didn’t get it. But I’ll tell you what- the difference between an author who gets published, and one who doesn’t ever sell that manuscript, frequently correlates directly to how that author processes and responds to constructive criticism.

Which is not to say that the editor is always right. I generally retool the manuscript based on approximately three-quarters of my editor’s comments. It’s one of the reasons I use up to ten beta readers for each book. If one person says something, and it doesn’t strike a chord with you, it might be just their impression (one example: for my upcoming novel KIDNAP AND RANSOM, my editor noted that the book, “doesn’t depict Mexico in a very favorable light.” And she’s right- it doesn’t, mainly because the bulk of it is set in the poorest slums in Mexico City. So that one I dismissed outright).

But if more than one beta reader reacts to something, that usually means it necessitates a change. For the same book, the majority of my readers (among them, my esteemed fellow bloggers) thought that there was a coincidence in the book that was just too darn convenient. And going back through it, I realized they were right. There had to be a better way to move the plot forward. In the end, I rewrote over two-thirds of the book based on feedback. And the end product was a stronger, more believable storyline (I hope).

This came up recently when I reviewed a manuscript for a friend from a local writing group who is struggling to get their first book published. I sent a detailed assessment of what I thought the strengths and weaknesses of the story were, bearing in mind what I know from experience editors respond negatively to. The writer’s reaction surprised me (particularly since I had more positive than negative comments). I received detailed responses to each negative note, arguments for why this scene and that character had to be in there.

Now, it’s this author’s choice to keep or discard whatever they like- after all, it is their book, and their name on the cover if it ever gets published. Sadly, unless at least a few of those changes are made, I suspect it will continue to garner rejections.

What I realized early on was that when an agent responded to a submission with a rejection, but also provided a response detailing why they rejected it, it was important to take note. A form letter rejection is one thing. If they bother to let you know what in particular prevented them from signing you, it means that you’re actually very close. I see the same thing in my critique group. When someone writes something that is a hot mess, few people say anything. The author invariably (and wrongly) takes this as proof that what they’re holding in their hands is perfect. The truth is, people say less when something is unsalvageable. When a heated debate begins, or everyone agrees on the salient strengths and weaknesses, the author has come close to hitting their mark.

So, going back to Jim’s “before you submit” post…before you send out that first stream of submissions, pass the manuscript along to people you trust. Aim for folks who you know will be hard on it (sometimes that means avoiding friends and family). Listen to what they say. Feel free to go incandescent with rage for a few days, then sit back down and read their responses more closely. And make those changes: kill those darlings, cut that exposition, come up with better ways for events to transpire. No manuscript ever suffered from revision-the more you change it, in general, the better it will become.