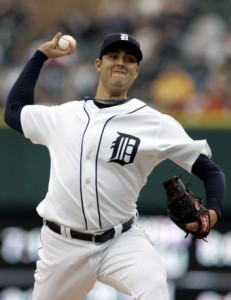 UPDATE: I changed the title of the post because it started sounding a little more negative than I liked. You purists can still find it in the URL.

Maybe you heard about the terrible blown call in baseball last week. Pitcher Armando Galarraga of the Detroit Tigers was on the verge of doing what only twenty other pitchers in Major League history have accomplished: pitch a perfect game (a no-hitter wherein no opposing player even reaches first base).

It was two outs in the 9th inning. Only one player left to go. But then the Cleveland Indians’ Jason Donald hit a grounder to the first base side. Galarraga ran over to cover. He caught the throw and stepped on the bag a split second before Donald’s foot.

In other words, Donald was out. Only he wasn’t.

He wasn’t because a veteran umpire, Jim Joyce, blew the call. He was in position to call it correctly, and did not. Because there is no instant replay review in MLB, the call stands. No perfect game. Not even a no-hitter. (For you trivia buffs, there have also been ten occasions where a perfect game was lost on the very last out.)

To their everlasting credit, all parties concerned handled things with class. Umpire Joyce manned up and owned it. He wept at his mistake. The Detroit fans showed class, too, by giving the highly regarded Joyce a standing ovation when he came out to umpire the next game.

And Galarraga and the Tigers did not do what 90% of other players and teams would. They did not overturn water coolers, or moan and complain.

Nor should they have. This is the reality of baseball. Human error by umpires is part of the game. You accept that going in. You know it’s going to happen. You want to change the rules and bring in replay, fine. But as it stands, blown calls are as much a part of baseball as peanuts and beer.

It’s like the publishing business, and life. Bad stuff happens to good people, and good manuscripts.

You get turned down by an agent in summary fashion. Your submission gets kicked at a publishing house for some reason other than the writing itself. You see someone else – maybe even a friend – score a great contract or get on the bestseller list. And it hacks you off, because you know you can write just as well, or better.

Life hands you blown calls. So what do you do about it?

When my son was first pitching Little League, he had a tendency to let a bad play or a home run upset him. So early on I made this rule for him. “You are allowed one ‘Dang it!’ And you can hit your glove as hard as you want. But that’s it. Then you go back to pitching to the next guy.”

That’s what he learned to do, and in fact won a championship game that way.

So you get that rejection, or see that unfairness. You can have one ‘Dang it!’ (or its adult equivalent). I’ll let you feel it for fifteen minutes. But that’s it. Don’t hang onto it. Don’t go moaning all over the Internet. Don’t yell at your spouse or kick your dog.

Instead, turn that energy into action – by writing.

Here’s what I love about being a writer. Every day is new. Every day I get to wake up and pound those keys and keep going. It doesn’t matter to me if I get a setback, a bad review, a rejection. I can keep punching, and I will keep punching until groundhog delivers my mail.

How about you? How do you handle blown calls?