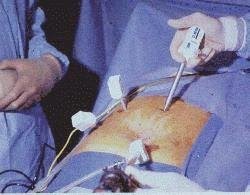 Last week, you may have noticed (I certainly hope you did) that I was MIA from my blogging duties thanks to an emergency cholecystectomy. That’s what normal people would call the separation of one’s gallbladder from one’s viscera. Mine had decided to die on me, and it turned out it had intentions to take the rest of me with it. Murderous bastard. In the end, good triumphed over evil, with Mr. GB incinerated in a medical waste bag, and its betrayed sponsor going home to his family.

I had suspected for a few weeks that my gallbladder was plotting against me. Even as two sonograms confirmed that no calculi (gallstones) were present, and that there was no telltale thickening of the organ’s walls—the two diagnostic indicators of cholecystitis—my symptoms persisted, including vomiting and the feeling that a woodland animal was trying to eat its way out of my abdomen. I’m no doctor, but I know when stuff’s not right, and that stuff was not right.

But it also was not perpetual (thank God). My worst attack lasted about 12 hours; most would run their course in four or five hours. When they were done, and I’d had a chance to rehydrate, I would feel more or less normal. Not so the past six weeks, however, in which I had multiple attacks. We’re talking Technicolor attacks here, shot in biological 3-D VistaVision, complete with Dolby sound. As tests came back negative, I was actually disappointed. I knew what I had, dammit. Why wouldn’t the doctors stake their reputations and their futures on my intuition?

The Alamo of gallbladder tests is the HIDA scan (hepatobiliary iminodiacetic acid). They inject a nuclear tracer into a vein, and then you lie under a camera for an hour. I actually fell asleep. That is, until the results uncovered my gallbladder’s murder plot. From there, it was directly to the ER, and from there to the OR.

During those few weeks when no one could prove what everyone suspected, I did research on my own. The Internet teems with information on cholecystitis and cholecystectomies. You can actually watch videos of full operations. I learned a lot about laparoscopic procedures and about the function of the gallbladder. Since this was my first medical procedure of any import, and because my personality borders on obsessive-compulsive, my thirst for knowledge was insatiable.

And for all that, I never did find the common-sense answers to the practical questions that concerned me the most. So, with the guarantee of providing way too much information, here, for the benefit of others, are the answers I wish I had found (not that the answers would have changed anything):

1. Yes, they shave you for laparoscopic surgery. Crown of my head notwithstanding, I am a fairly furry fellow, and at the risk of sounding vain, this is the summer season, and, well, you know. I was concerned. For good cause. They mowed everything from the right of mid-left abdomen, from nipple line to pubic line. They do it after you’re sedated. Now that it’s done, the cosmetics worry me less than the prospect of a lot of itching over the next few weeks. (Months? I have no idea how long it takes to grow back.)

2. Urinary catheterization is not a routine part of laparoscopic surgery. Unless your name is John Gilstrap. Turns out that the opiates they use to anaesthetize you and control your pain have the side effect of paralyzing the urinary sphincter at the same time while your kidneys are processing the flood of liquids they’re receiving from your IV. In all fairness, they gave me ample opportunity to urinate through normal means, but there comes a point of no return. As soon as they tapped me, I filled the bag with slightly more than a liter of liquid. (Hey, I warned you about TMI!) At the time, I confess that the relief of pressure trumped the discomfort of the catheter. I later learned that I’d been tapped by an I/O catheter (in & out, I think), the little baby of the catheter family.
3. The Foley catheter is a whole different animal than the I/O catheter. My case differed from most cholecystectomies because during the removal procedure, the surgeon discovered impacted calculi in my common bile duct, prompting a second emergency procedure (an ERCP—endoscopic retrograde cholangeopancreatography) the following day. When I returned to my room from the ERCP, my urinary bladder had officially taken the day off, and the guy who mans the sphincter was pissed (rimshot!
3a. Note to nurses everywhere: When you’re talking about shoving a 15-inch tube into a man’s winkie, you have to choose your words carefully. I heard “long term” and panicked. Turns out they were thinking along the lines of 18 hours. Sorry, ma’am, but unless you’re a fruit fly, 18 hours is “short term.”
3b. Second note to nurses everywhere: I was wrong. Eighteen hours is freaking eternity when you’re tied to your bed by your winkie. They tell you you can get up and walk with that snake installed, but it’s a trick that requires staff. With one hand on the IV pole and the other trying to preserve some dignity despite the open-backed gown, I never figured out what I was supposed to do with the eight-pound bag of effluent. One of my nurse-technicians was kind enough to show me how I could actually hook the collection bag to the IV stand, but during his demonstration, the bag rose higher than winkie-level for a moment, and let me assure you that it’s a very special sensation to have urine run back into your body. (How’s that meal sitting, dear Killzoners?)
4. Panic aside, none of the catheter/winkie nightmares you have during the night come true. Once it’s removed, everything functions just fine.
5. A two-day hospital stay for laparoscopic surgery makes you fat—but only for a while. Between the gas they pumped into my belly for the surgery and the fluids they flowed into me to keep me alive, I came home with three inches more girth than when I first checked in. Good news: physical activity (i.e. walking) triggers the mechanisms to relieve the discomfort. Bad news: you don’t want to be in genteel company when those mechanisms kick in. I literally peed away six pounds in my first 24 hours at home. As for the residual gas, well, you get rid of that exactly how you would imagine.
5a. Suggestion for all scheduled surgery patients: If you have the luxury to plan your trip to the OR, first go to your local Salvation Army Thrift Store and buy a pair of pants that are way wider than your current waist size, and plan to wear them on your trip home. You’ll thank me for this one.

I apologize that none of this is topical to the subject of this blog, but since you’ve read this far, allow me one last indulgence. I write books about people who save the lives of perfect strangers, but this is the first time that I’ve ever played the role of the stranger. People I’d never met literally worked overtime to return me to my family with a shining prognosis. I make light here, but understand that the humor is a cover. How do I return that kind of favor? The phrase, “thank you,” seems sort of hollow under the circumstances, but it’s all I’ve got.

So, listen up, Dr. Trad, Dr. Shah, Dr. Aziz, and the entire nursing staff at Reston Hospital Center: On behalf of my entire family, thank you.

10 thoughts on “Way Too Much Information”