Over at the Absolute Write forum, someone recently posted a request for advice on where to end the middle act of his novel. It was interesting to read the reactions, many of which expressed no idea that most novels are built on a 3-act structure. Now let me state right from the beginning that there are exceptions to every rule. And when it comes to writing fiction, the only rule is that there are no rules. But in general, most commercial fiction is usually based on a beginning, 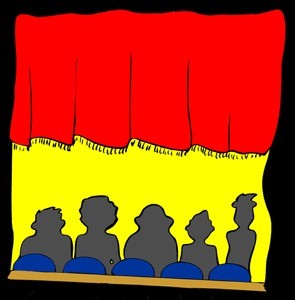 middle and end structure. This comes from traditional stage drama, but unlike the theater, there’s no curtain dropping at the end of Act 1 and going up at the beginning of Act 2. Even though it’s not as obvious as when you attend a play at your local community theater, if you analyze most genre fiction you’ll find (or at least feel) where the three acts begin and end.

So let’s take a look at the basic 3-act structure of a novel. In most cases, the beginning (Act 1), middle (Act 2) and ending (Act 3) are separated, not by points in time, but by major plotting points.

Act 1. The beginning is normally where the author introduces the reader to the setting/environment, the characters, their goals (wants and needs), and the conflict that impacts the protagonist’s life and launches the story. This impact knocks him or her from an ordinary situation into an extraordinary one. The protagonist might start out content with life, perhaps gliding along and comfortable in his or her niche. Then something happens to throw the protagonist out of the groove—an obstacle or roadblock that forces him or her to take some kind of action outside their comfort zone.  It’s often a shock to their routine or a threat to their safety or someone close to them. Perhaps it even requires survival instincts to kick in. A path is created that will eventually bring the protagonist and antagonist into a final climactic scene. In Act 1, the “story 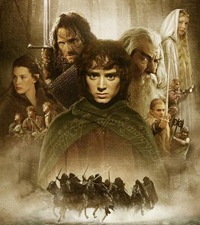 question” is usually established such as, “Will Frodo Baggins destroy the Ring before the Dark Lord takes over the Shire and all of Middle Earth?” In Lord Of The Rings, by the end of Act 1, Frodo has decided to set out, although reluctantly, and pursue his quest to save his homeland and his people. As he takes his first step on his quest, the curtain descends on Act 1.

Act 2. The middle of the story often deals with a series of conflicts and obstacles that the protagonist must overcome in order to gain enough confidence to meet the final scene head-on. Arguably, the middle or “muddle” is the most challenging act to write, for the reader’s interest must be sustained while propelling the protagonist toward a goal that he or she and the reader desire. The element that fuels Act 2 is conflict, and each obstacle or test should build in severity from the previous one thus constantly raising the stakes and proceeding at a steady pace toward the end. The object here is to keep the reader reading. Remember too, that conflict does not always mean physical. It can be just as taxing and demanding when it’s emotional or spiritual. Act 2 also contains the lowest point in the story, emotionally or physically, for the protagonist. It usually occurs just before the end of Act 2 and the final Climax. It is the “darkest moment” in which all hope seems lost and the protagonist must summon up the final ounce of courage against all odds to resolve the story question. The resolution of the story question should happen at the Climax, and the curtain descends at the end of Act 2.

Act 3. The end is what some writers refer to as the “roundup”. This is where all loose ends, subplots, and lingering questions are answered. The reader should never finish the last page with any questions unanswered. The roundup is usually the final chapter, and because it’s hard to keep the reader’s attention after the climax, Act 3 should be short and to the point. Answer all the questions and proceed to the exits. There’s nothing left to see.

As readers, are you aware of the 3-Act structure in genre fiction? And as writers, do you think of it as you write, or is it more instinctive and subconscious? Have you ever written or read a book that was not based on the 3-Act form?