I wanted to clarify the thing in the anniversary blog about me setting up a portrait studio at racist gatherings. I did it to capture images of Klansmen, Skinheads, and Identity Christians, not because I was attracted to their speeches. I was a portrait photographer and I was interested in intense groups of people for series. I started with artists. I did death row inmates. I met the leader of a group of skinhead thugs who had broken Heraldo’s nose on TV and I photographed him and a few of his friends in New Orleans in the late 80s. That led to a letter of an introduction letter (on SS lightning bolt letterhead) to other groups of like-minded racists around the country. I don’t know what I did with the damned thing. I’m sure it used to be in the drawer with the collected letters from death row inmates in Angola. 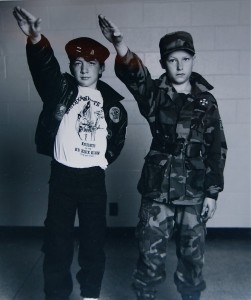 Here’s how I did it: I used a Polaroid back on a large format (4X5”) camera. I’d ask for the subjects to sign a release and I’d give them the B&W portraits, which I put fixative on. What I didn’t bother to tell them was that after the picture was pulled, there was a high-quality negative left over, which I could print later in a darkroom. I suppose the subjects, most of which were hardly rocket scientists, believed they had the only prints, although I never said as much.

From my childhood these people were my enemies and when I was younger they terrified me because they focused their hatred on my father. I could say that I despised them for their beliefs, which are narrow and frightening. But the truth is, I just felt sorry for them because their philosophy is based on their fear of being further marginalized in society than they already are. They are dangerous on several levels, but are inherently only slightly more suspicious of outsiders than they are each other. According to FBI sources, about one in twenty is an informant. In short they are paranoid and deluded as to their importance and potency. I found their gatherings sad affairs filled with a sort of beer hall bonding over a cold glass of hate and ignorance. I felt sorry for the children of hate, because they never have a chance (until much later) to form their own idea of self and of the value of others who are different than themselves. 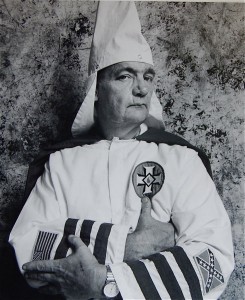 Grand Dragon of the Florida KKK 1990

When the story and pictures I’d done hit the presses, the subjects went wild. I had death threats. Several while I was being interviewed on radio in Miami. The Miami Beach police watched over me without my asking. I lived in a predominantly Jewish neighborhood and I had made a number of friends in the ADL (Anti-defamation League) while I was doing the series who made sure I was watched over. I had spent hours of time on the telephone with investigators with The Southern Poverty Law Center trading information as I learned who these people were and their relationships to each other. I guess I had much better pictures of certain subjects of interest than they did, and I had names and addresses. The racists felt betrayed when the not-so-flattering story was published, but I never told them I agreed with anything they said. I just listened and absorbed and ultimately regurgitated my experiences for a piece for Miami Herald’s Tropic Magazine entitled, MY FRIEND THE NAZI. 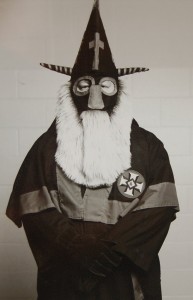 None of the Nazis, Skinheads, Klansmen, or Christian Identity members were ever my friends. Friends don’t make your skin crawl. I wish I had been able to show them how wasteful and self-destructive their philosophies were, but that’s not usually in the realm of being remotely possible. Hate is all they have.

11 thoughts on “Who knows what evil lurks…”