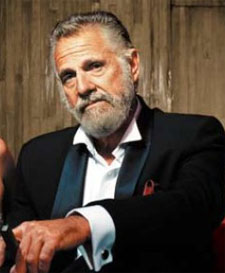 I love a good ad campaign.

When I started running a small legal publishing business years ago, I had to teach myself advertising and marketing. I read some classics on the subject, such as How to Write a Good Advertisement by Victor O. Schwab and Tested Advertising Methods by John Caples.

My favorite, though, was Ogilvy on Advertising by the legendary ad man David Ogilvy. This volume made me appreciate what goes into successful ads, and just how hard they are to pull off.

So when I see a great ad campaign, I nod in approval. One of the best of all time has to be the “I’m a Mac, I’m a PC” series. It’s no accident that Mac’s market share has shot up in tandem with these ads. Smart, funny, short, well acted, superb.

But my current favorite is “The most interesting man in the world” campaign for Dos Equis. You’ve all seen it (and if you haven’t, you need to become more interesting by looking it up. You can start here).

A typical spot will feature “vintage film” of the man in various pursuits, while a narrator recites a few facts about him. Then we see him sitting in a bar surrounded by beautiful people. He looks into the camera and, in a slight Spanish accent, says, “I don’t always drink beer, but when I do I prefer Dos Equis.”

A few of my favorite “facts” about this man are:

• He lives vicariously through himself.

• He once had an awkward moment, just to see how it feels.

• The police often question him, just because they find him interesting.

• He once taught a German shepherd to bark in Spanish.

And then, at the end of each ad, comes the man’s signature sign off: “Stay thirsty, my friends.”

What’s so good about this campaign?

It’s risky. Having a graying, middle aged man as the lead character is, as they say, counter programming.

It’s funny without trying too hard. The understated way the deep-voiced narrator extols the man’s legend is pitch perfect.

It has a complete backstory, revealed a little at a time in the mock film clips.

These are qualities of a good novel, too. Risky, in that it doesn’t repeat the same old; a bit of unforced humor is always welcome; and a backstory that renders characters real and complex without slowing down the narrative. All that we can learn from “the most interesting man in the world” campaign.

And from the man himself we can learn, as writers, to live life expansively and not just lollygag through our existence. Not waiting for inspiration but going after it, as Jack London once said, “with a club.” Believing, with Kerouac, in the “holy contour of life.”

We ought to be seekers as well as storytellers, a little mad sometimes, risking the pity and scorn of our fellows as we pursue the artistic vision. Then we park ourselves at the keyboard and strive to get it down on the page. Why go through it all? Because the world needs dreams rendered in words.

Writer, keep after it and someday this may be said of you as well: “His charisma can be seen from space. Even his enemies list him as their emergency contact number.”