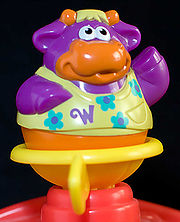 Sometimes your story may get unbalanced in some areas, like a tire that’s gone out of alignment. Severe story wobble can kill the pacing and reading experience, so it pays to recognize the symptoms, and take remedial action to push your narrative back into shape.

When you’re doing any of the following in your writing, it’s likely that your story is getting off kilter:

It’s easy to fix most cases of story wobble. Here are some remedies:

What are some of your story wobbles that you have to search for and destroy when you’re rewriting? Has there ever been one that has caused you embarrassment?