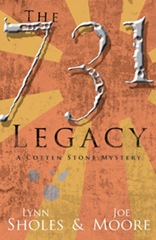 October marks the publication of The 731 Legacy, the fourth (and final) installment in the Cotten Stone series. My co-author, Lynn Sholes, and I have lived with our main character for over 7 years and have grown to know and care for her very much. Ending a series is almost like a death in the family—someone you have become close to has passed on. But like real life, it’s inevitable.

Cotten’s journey began over a decade ago when Lynn and I were members of a local writer’s critique group. Writing under the name Lynn Armistead McKee, she was the only published author in the group with six books in print. One evening she mentioned an article she’d read in Discover Magazine about an archaeologist who unearthed a well-preserved relic at a dig site in Jerusalem that he believed was the cup used by Christ at the Last Supper. Tradition holds that the cup was also used to collect Christ’s blood at the Crucifixion and became know as the Holy Grail. Traces of human blood were found inside the relic and the archaeologist believed it to be the blood of Christ.

Based on the article, Lynn proposed her idea for a book: What if someone used the DNA in the Grail to clone Christ. Someone evil.

I was blown away by the idea and encouraged her to write it. But she was reluctant and felt it might be too ambitious a task for her to take on. Her style was more lyrical with romantic undertones. This was a “high concept” thriller that she didn’t feel comfortable undertaking.

I was so intrigued with her premise that after waiting a couple of years, I finally threatened her that if she didn’t write the book, I would steal the idea and write it myself. We compromised and decided to work on it together. We felt that the areas I was weak in she had strength, and vise versa. We spent a summer constructing

an extensive outline and then began drafting the first chapters. Our collaboration could only be described as a train wreck. Everyone that read our first chapters could tell who wrote what. It was a mess. But we didn’t give up. And the thing that probably saved us from abandoning the project was the 10 years we had spent in our critique group. We knew our strengths and weaknesses, our styles, and our voices. So we put our egos aside and maintained a solid respect for each other’s skills while plowing forward until we completed what became The Grail Conspiracy three years later.

Lynn’s agent shopped the manuscript around and quickly got us a contract. Within a year, our book was named ForeWord Magazine’s Book-Of-The-Year, got translated into over 23 languages, and became an international bestseller. Cotten Stone’s journey had begun.

We had no idea that the publisher wanted a series until we noticed it said “A Cotten Stone Mystery” on the proposed cover. They wanted more? Apparently so.

So we came up with the concept of The Last Secret. Like TGC which combined cutting edge science (human cloning) with an ancient relic (the Grail), we continued this scheme with Cotten’s next adventure. The science was quantum physics and the relic was a 5000-year-old crystal tablet that predicted the Great Flood and held the key to surviving Armageddon along with revealing the path to the Kingdom of Heaven. Cotten’s journey took her on a race to find the tablet before it could be destroyed by the same group that wanted to clone Christ.

Book 3 was The Hades Project, again combining science (quantum mechanics) and a relic (The Spear of Destiny). The Forces of Evil were back, this time about to reek havoc with the world’s first quantum computer. To complete their project, they needed the rarest element on earth to power the computer, and the Spear just happened to be made out of it. The race was on.

That brings us to The 731 Legacy and the discovery that the remnants of an ancient killer retrovirus are scattered across the human genome. The Forces of Evil figured out a way to reassemble the virus and create a new generation of suicide bombers that can kill selected targets with something as innocent as a cough on a crowded bus or a sneeze in church. Like the previous chapters of her journey, Cotten had a tough time dealing with this one and came close to tumbling off the edge of the abyss into Darkness.

The Cotten Stone journey has been great fun to write. And many have told us equally good fun to read. Lynn and I have watched Cotten grow from a rookie network reporter who rejected her special calling in life to senior investigative correspondent for the Satellite News Network and the full acceptance of her “special” legacy. She learned a lot along the way and so did we. And despite the fact that the journey has probably ended, at least on paper, the good news is that in the end, Cotten and her fans finally got what they’ve been asking for all along the way. What was it? You’ll just have to read The 731 Legacy.

5 thoughts on “The journey of Cotten Stone”