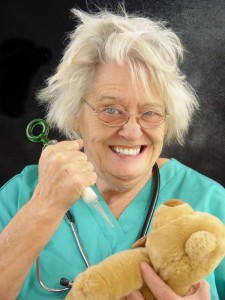 By Kathryn Lilley
Nurse Kills Patient Over Grudge
That headline grabbed my attention a couple of years ago when it appeared in newspapers. Here’s the story behind it: a nurse in a plastic surgery office was accused of killing a patient following a plastic surgery procedure. It turned out that the victim had stolen the nurse’s boyfriend 30 years earlier, when both women were in high school. So this was the nurse’s way of getting some long-overdue payback.

Talk about revenge being a dish that is best served cold.

That passing headline spawned an idea that stayed with me and eventually emerged as a subplot in one of my Fat City Mysteries (I won’t tell you which one, although you probably won’t recognize it in its fictionalized version). Here’s a link to the original article.

I was particularly struck because the story underscored how powerful our emotions can be, especially when we’re young. Who would have thought that a jilted girlfriend would actually murder the “other woman” who happened to turn up in her medical care, thirty years later? In addition to fueling a subplot for my story, the article also made me start reflecting on what was to become one of the themes in my book: jealousy and revenge. To write the story, I had to cast back on my own life experience to flesh out the character of the young person who would turn into a murderer.

I’m one of those people who was utterly miserable during middle school and early high school years. I was withdrawn, and had trouble making friends. There was a group of “mean girls” who made my life a living hell, especially in gym class. I think I can remember every joke they made at my expense, and every slight that was directed my way. Sometimes I wonder what would happen if I met any of those girls today. Probably nothing. But during the writing of this particular story, I made a conscious effort to dredge up those old feelings of rage and humiliation. The process helped me be able to see my fictional murder from the killer’s point of view. That was important, because I feel that in most murderers’ minds, their acts of homicide are justified. The victim has wronged him or her, and deserves to die.

I always try to get into my killer’s head, sometimes to the extent that I wind up empathizing with him. The killer may have used the wrong solution, but the homicide must seem justified, at least from that character’s point of view.

7 thoughts on “Ripped from the headlines”