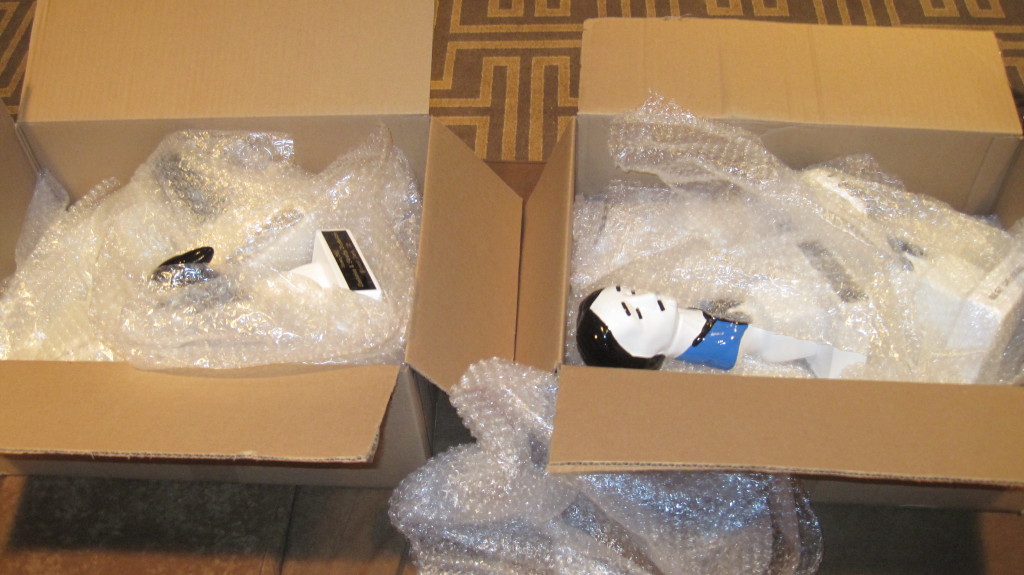 So I am doing my usual warm-up before hitting the computer this morning: folding laundry and watching “Frazier” reruns. I love Frazier because beneath his smooth surface is a roiling bog of neediness and insecurity.

Today was the episode where Frazier and his producer Roz are nominated for the Seebee Award, given out to Seattle’s best broadcasters. Frazier tries to be above it all, but he just can’t. He wants to win, dammit! But at the banquet, he finds out he is up against the aging icon Fletcher Grey. Fletcher has been nominated 11 times in a row and lost 10. Fletcher’s date is his 84-year-old mother who has flown in from Scottsdale — for the 11th straight year. Fletcher is also retiring. Frazier tells Roz, “if we win, they’ll string us up.” Roz says, “I don’t care. I’d crawl over his mother to win this award!”

Frazier loses, of course. His agent Beebee deserts him. Roz gets drunk on Pink Ladies.

Sounds like a couple award banquets I’ve been to. I’ve been chairing the Edgar Awards banquet for ten years now, plus Kelly and I have been lucky to have been nominated for some awards over the years. Our second Louis Kincaid book, Dead of Winter, was nominated for the Edgar. We were desperately excited. Bought new dresses. Went to New York City. Kelly’s son Robert, her date for the big night, rented his first tux at Abe’s Formal Wear on Sixth Avenue. We met our agent for drinks in the Grand Hyatt bar but ordered diet Cokes because we wanted to be stone sober in case we won and had to give a speech.

We sat through the excruciatingly long evening, dry-mouthed and wet-palmed. Then our category came up and…we lost.  We all reached for the wine bottle in the middle of the table at the same time.  I think my agent cried. I’m pretty sure I got drunk.

Here’s the thing about awards. Yes, it is always an honor to be nominated. But it bites to lose. I can’t lie and tell you otherwise.

I’ve been thinking about this lately, and not just because of Frazier. This is the week I start gearing up for the Edgar banquet, which is April 28. (Click HERE to see the list of the 2016 nominees.) 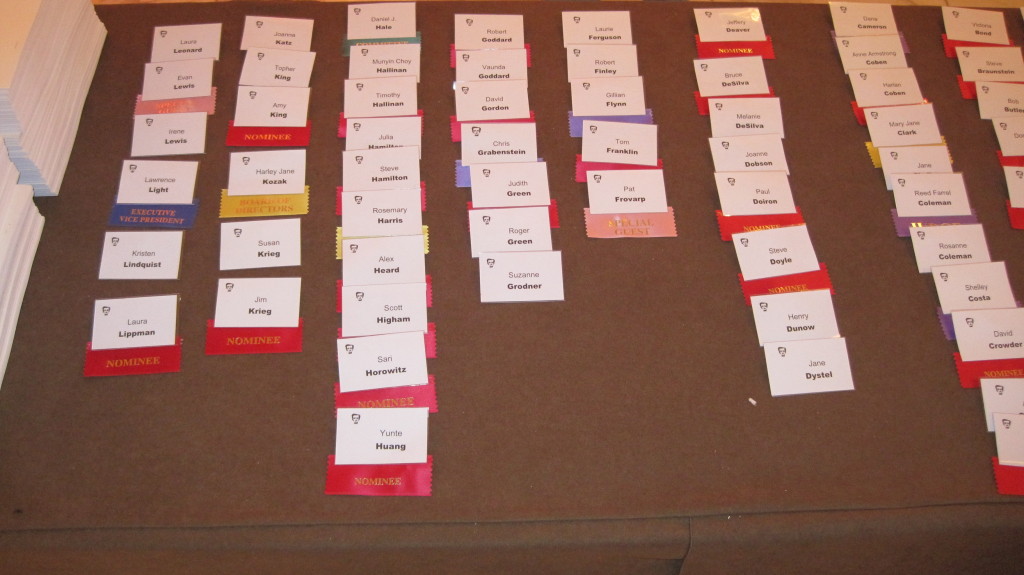 Badges ready for the nominees.

I love this gig.  It’s really cool to see old friends again every year and hang out with the big names at the cocktail reception. But my favorite chore is helping to man the nominee greeting table, because I get to meet all the nominees who come in, spouses and children in tow, the mens’ clip-on tux ties askew, the women’s lovely faces flush with anticipation. They all are so darn happy. I want them all to win. Because I do know how that feels as well.

In 2007, our book An Unquiet Grave was nominated for the International Thriller Award. And just like the first time, all the toads and newts in my bog of insecurity bubbled to the surface.

I went to banquet with no expectations, sitting  between my agent and Ali Karem. Everyone wished me luck, but I was filled with dread. My sister Kelly couldn’t make it, so I felt pretty alone despite all the good vibes. We might write hard-boiled, but I am not. The evening dragged on through the various categories. Finally, I couldn’t take it anymore. I bolted for the lobby.

Jim Fusilli was standing there and barred my way, putting an arm around my shoulders. Each nominee was announced by reading the first line of the book. Ours is “The Christmas lights were already up.” I remember thinking, “God, that sucks.”

I heard the title of our book announced as the winner. I started crying. I don’t remember what I said on stage. Many authors, when they are up for awards, jot down a few bon mots so they don’t make asses of themselves. They at least think things through. These are the authors whose gracious and often clever speeches are quoted on Facebook the next morning.

This is what SHOULD have been in my head as I went up there:

“Thank you so much for this great honor. First, I want to thank the ITW judges who put their careers on hold for months. Their job is doubly hard in that they first must read hundreds of books but then, they must decide on just one when any of the five finalists would be worthy. Second, I want to thank my fellow nominees. I am honored to have my book mentioned among their fine works. Third, I want to thank my agent and editor who….”

This is what was REALLY in my head:

“God, I can’t believe I am crying! How pathetic and needy! Where’s the friggin’ stairs? I can’t see! Who is that man at the podium? Damn, I forget his name! THE LIGHTS! I CAN’T SEE ANYTHING! Do I have lettuce on my teeth? Agent…mention her name. My bra is showing, I just know it. DON’T PULL AT YOUR BRA!! He’s handing it to me. Jesus, it’s heavy…don’t drop it…don’t drop it…don’t drop it. Say something nice about the other nominees! Can’t…can’t…can’t remember their names. YOU TWIT! You just sat on a panel with TWO of them this morning! Wait, wait…is it Paul LeVEEN or Paul LeVINE??? Forget it…buy them a drink later. I should have gone to the hairdresser before I left home. My roots are showing. Damn, did I thank my SISTER at least? JESUS! THE LIGHTS! Stop talking now…you’re rambling, you ass…stop now and just go sit down. Okay, leaving now. TAKE THE AWARD! Don’t drop it…don’t drop it…don’t drop it. Good grief…I’m here in New York City wearing Nine West because I was too cheap to spring for those black Blahniks at Off Fifth. Dear God, just let me just off this stage so I can get to the john and pull up my Spanx and get a glass of wine….

So, here’s the thing, dear writer friends, as we enter the award season for the Edgar, the ITWs, the Shamus, Anthony, et al:  Awards are nice, but they won’t change your life or probably not even affect your writing career.  Truth be told, you can go back and read the list of past Best First Novel Edgar winners (click here), and you’ll be shocked how few made it big. And some of the brightest bestselling lights in our crime business have never won squat. They don’t keep an empty spot on their shelf hoping to fill it with that little porcelain Poe statue. They fill their shelves with their finished books. That is what really matters — hard work, consistency, and the constant quest to get better.

But…if you are ever lucky enough to be nominated for something — anything — enjoy the moment. It really is an honor to be recognized by your peers. Just leave the Spanx at home.