After almost two decades as a crime novelist, working in a business that has seen head-spinning turmoil, I’ve found there is one thing that never seems to change — the menschness of my fellow writers.

I’m pretty sure that menschness is not a word. But maybe it should be. Because what I am trying to describe goes beyond friendliness, kindness and even camaraderie. Sure, you can find all those traits in our community. But the thing that always strikes me when I mingle at conferences, sit on panels or hoist a pinot at the hotel bar is the down-to-earth nice-guy attitudes of my fellow crime dogs.

Okay, I just went and looked up mensch so you don’t have to:

Mensch (מענטש) a Yiddish word that means “a person of integrity.” A mensch is someone who is responsible, has a sense of right and wrong and is the sort of person other people look up to. First known use 1856. In English the word has come to mean “a good guy.”

I have met lots of mensches in the mystery world. Folks who were kind to me in the beginning and gave me advice or a blurb. Big-time writers who, as Lee Child once put it, once they climb high don’t forget to reach down and pull others up a rung. Fellow mid-list authors who shared my pain and talked me off ledges. Beginning writers who sent me thank you notes for something I did or said.  With the exception of one super-successful bestselling toad-guy (who shall remain nameless here) most the people I’ve met along the way have been generous of spirit. 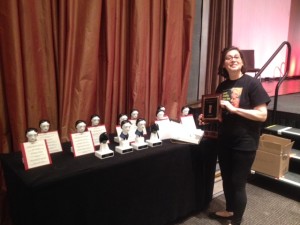 This point was driven home to me this past week when I went up to New York for the Edgar awards given out by Mystery Writers of America.  I’ve been chairing the banquet since 2007 and it has put me in touch with some of the biggest luminaries of our genre. (One reason I volunteer for the job!) Bear with me if I go alittle fan-girl here on you, but I want to talk about them, because sometimes us guys on the lower rungs tend to think those stars above us aren’t human.

Lee Child I met at the Las Vegas Bouchercon. During a cocktail party, I screwed up my courage and went over to introduce myself. He looked down at me (everyone does…I’m five-three and shrinking fast) and said, “You stole the title of my book, you know.” I’m standing there thinking WTF? Then Lee told me that his book One Shot had come out the same day as the MWA anthology, in which I had my first short story, “One Shot.”

“I forgive you,” Lee said. And he bought me a beer. 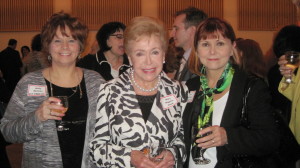 Kelly and me flanking Mary Higgins Clark at our first Edgars.

Mary Higgins Clark I met at my first Edgar banquet when she came up to me when it was over and said that she had been attending the banquet for decades and this was the best one. She didn’t have to do that. But she’s a mensch.  This year, when I went to get my drink at the cocktail party, the bartender asked me in a whisper, “Is that Mary Higgins Clark over there? I’m her biggest fan.”  Wiping away visions of Misery, I took her over to meet her and Queen Mary was utterly charming. 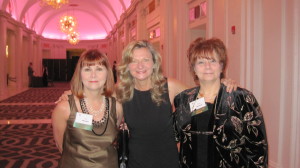 With Lisa Scottoline. then MWA prez.

Speaking of royalty, Lisa Scottoline is another good guy. The night she was emceeing the Edgars Prince William was getting married to Catherine Middleton. At the podium, Lisa wore a tiara in their honor. We’re both royalists and bonded over brain-lint on the Saxe-Coburg Gotha family line. Another mensch queen.

Which leads us to kings. Yeah, I got to meet him. It was my first Edgar job back in 2007 and Stephen King was named Grand Master. One of my duties was to greet him, make sure he got to interviews, a book signing and cocktail parties, and wasn’t mobbed in the Grand Hyatt lobby. I was nervous and tongue-tied. He took my hand and told me to relax. Last week, we met again because he was a Best Novel nominee. (He won for Mr. Mercedes). Not only did he remember my name, he asked what I was working on. 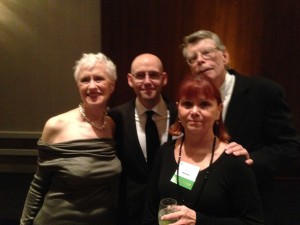 I got to escort Stephen and his wife Tabitha to the nominee party, and when I walked in, you’d think I had the pope in tow. That pic is of me  (looking oddly dyspeptic) with Sara Paretsky and Brad Meltzer. As I watched King work the room (or rather the room work him), I was in awe of how unflaggingly gracious he was to everyone, no matter what their rank.

I wasn’t alone. Best nominee Ian Rankin tweeted: “Well, on the minus side I didn’t win the Edgar award – some young ruffian called Stephen King did. On the plus side I got to meet Mr King.”  From Best nominee (and one of my fave writers) Stuart Neville came this tweet: “I didn’t win the Edgar, but I got to meet Stephen King, who was very gracious in tolerating my fawning.”

Another true mensch is Brad Meltzer. I got to meet him when he was the GOH at SleuthFest and later when he was MWA president and emceed the banquet. He is funny, down-to-earth, and always has time to talk to you, no matter your status.

These are just a few of the good folks I’ve been lucky to meet. So many others have been kind to me on my way to this point in my career — Jerry Healy, Elaine Viets, James Hall, SJ Rozan, Steve Hamilton, William Kent Kreuger, Reed Farrel Coleman, Linda Fairstein, Mike Connelly, Stuart Kaminsky, Eleanor Taylor Bland, and John Gilstrap, who gave me my first blurb.

I wish I could remember who said this, but it was about what “class” was: The ability to make any other person comfortable, regardless of their status and your own. All the folks I’ve mentioned have it in spades. And after a sorta rough year, it was good to go back to New York and be reminded that no matter what winds buffet the book world, our community provides shelter and support.

But ours is a small family with long memories. So no matter where you are on the food chain, play well with others. This post was inspired by a blog I read the other day wherein the author Guy Kawasaki provides five tips on how to be a mensch. After the Edgars, I realized there are lessons in here for writers:

1. When someone has wronged you, continue to treat them with civility. For writers, don’t curl up and die at the easy slight. This happened to me years ago when a fellow writer said something not-so-nice to me in a conference bar. I stewed about it for a long time and finally decided to confront her. She apologized and said she was drunk and had been too embarrassed to bring it up. We’re friends now.

2. Give way more than you take. Volunteer to work at a conference. If you’re published, give someone a critique. Don’t just sit back and bitch; get involved. And if you are a blog lurker, don’t be shy about posting. No one wants to be that creepy guy at the party who sits silent in the corner and just watches. A good blog (like ours here at TKZ) is a conversation. It’s at its best when we all give something back. Winston Churchill said, “We make a living by what we get. We make a life by what we give.”

3. Genuinely acknowledge others. If someone gets published, congratulate them, for God’s sake. If you owe someone a debt, put them in your acknowledgements. If you’re in a critique group, find something to praise. We all need praise. It is high octane fuel for the soul.

4. Embrace diversity.  If you read only light books with happy neat endings, read something dark and difficult. Or better yet, try to write it.  If you’ve never tried to write short stories, now’s the time. If nothing else you will find, as I did, that it’s not as easy as it looks. And lastly, don’t be a genre snob. If you write hardboiled noir, don’t look down your nose at cozies. (Chances are their royalty checks are bigger anyway). When I finally got around to going to Malice Domestic a few years ago, it was like being in a different world, sure, but I came to appreciate more deeply the writing of our less gritty brothers and sisters.

5. Default to kindness. In his blog, Kawasaki says the biggest deficit is not monetary—it is the lack of kindness in our interactions with others. You see this dynamic in action at any writer’s conference. We tend toward cliques. We gather with people of similar status. It’s like high school all over again. But you don’t have to give in to it. If you see someone sitting alone, gather them into your circle. If you are on a panel and someone is struggling, help them out. If you’re sharing an event or signing with someone, talk up their stuff along with your own. And if you ever find yourself in the same room as Stephen King, introduce yourself. He may keep a small boy’s heart in a jar on his desk, but he won’t bite your head off.

Be a mensch. And thank you for putting up with my fan girl pix.