When my daughter turned eight my wife and I decided to throw her a major birthday party.

This was back in that window of time when laserdiscs were all the rage. Man, I loved those laserdiscs! The Criterion Collection, the great covers. Oh, how relentless is technological change. Now I stream TCM on my phone.

In any event, there was a video/laserdisc store near our home which had a small theater in the back. You could rent that place out for parties and the like. so that’s what we did. We invited five or six of my daughter’s best friends, ordered pizza and candy and popcorn and a cake. Our daughter was excited about the party of the year.

But what movie to show? My wife and I discussed this, and I practically insisted we show the Carroll Ballard film, The Black Stallion. I mean, come on. It had horses! Little girls love horses!

Before the main feature, the proprietor of the store played a music video hawking the film The Addams Family. It featured MC Hammer before he was simply Hammer, and it was a hit. The girls stood up and danced around and laughed.

I sat back with a satisfied smile. Champion Dad, that was me!

And then came The Black Stallion. It’s truly one of my favorite movies of that era. Magnificently shot, wonderfully acted. 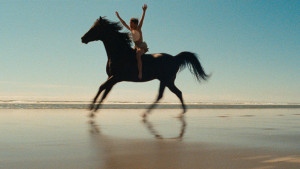 But also lyrically deliberate (translation: leisurely. Slang: slow). And, as I soon found out, not the right movie for sugar-buzzed eight-year-old girls who had just been bouncing up and down to the moves and music of MC Hammer.

It was only about twenty minutes into the film when the first stirrings of boredom began to vibrate. Girls started chatting with each other. Some went to the bathroom and took their sweet time coming back. My daughter’s eyes pleaded with me to do something.

Eventually I stopped the film and we got the owner to put on some cartoons. Then we moved on to cake and presents. Party saved!

But what had gone wrong? Something very simple. I had chosen a film that delighted me, that I thought everybody should like, especially a group of girls. But it was not a movie that delighted them. It was the wrong movie for the age group and occasion, which was a raucous get-together to celebrate a birthday and make some noise. They wanted to have fun and laugh.

In short, I failed to appreciate the needs of the audience.

Which is a mistake we dare not commit as writers. May I suggest the following principles be put in your mental lock box?

If you want to write what you want to write and don’t particularly care who reads you, that’s fine. You can be the local Starbucks laptop jockey. But if you are in this to be a pro, you must give thought to your readers. What are they looking for? Well …

Which means you have to know how to weave those dreams. That is why we talk so much about the craft here at TKZ. To do justice to readers means you take the time to figure out what they love and how to deliver it. You realize that all of us are wired to receive a story that has structure, involves characters we bond with, and creates unconscious delight in how it is told. That doesn’t happen by accident.

It’s fine to write material that requires readers to expend mental effort. Art can be many things, and challenging is one of them. Just know that you can’t force readers to recognize your genius. And have the courage to ask yourself if you’ve crossed the border separating true artistic enterprise from self-indulgence.

Beautiful words count for very little if there’s no story, no characters worth caring about, no real plot. There’s an old adage for writers that goes, “Kill your darlings.” Stephen King likes to quote it, and it’s attributed to a number of writers, like Faulkner and Oscar Wilde. But apparently it comes from a lecture on writing style delivered by Sir Arthur Quiller-Couch back in 1914. He was warning against “extraneous ornament” when he said:

If you here require a practical rule of me, I will present you with this: ‘Whenever you feel an impulse to perpetrate a piece of exceptionally fine writing, obey it—whole-heartedly—and delete it before sending your manuscript to press. Murder your darlings.

You may, if you wish, read the full lecture series here.

So there it is, friends. Throw a party for your readers and don’t force them to sift through what you think they ought to like. Delight them instead.