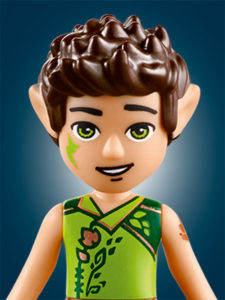 I stepped through the mirror and into the Elven city.  I knew my mother was alive was determined to find her.  If anyone could find her it was the elves; their powers of divination equaled no other.  Compared to the other worlds I’d visited this one was one of my favorites.  Everything was done by magic so the air was clear and clean.  Everything was lush, colorful and the air hung with magic.  The Elves were friendly people; waving to me as I passed.  I continued until the palace came into sight where I stopped and stared in awe.  It seemed to shimmer with rainbows in the light.  Once I got closer I realised that the palace was made of crystal, the sunlight refracted off the many facets and created a rainbow aura around the whole building.

Elven guards flanked the doors as I approached.  Everything about them screamed otherworldliness.  Perfect faces under perfect sapphire eyes, perfect brown hair and perfect bodies.  Everything was so perfect.  The guards didn’t look at me as I approached, but reached out in synchrony and opened the double doors.  The inside of the castle wasn’t crystal as I expected but stone.  I could feel the effects of heavy magic and suspected the stone was changed from crystal.  I continued down the hall and soon came to the throne room.  These doors were opened by another pair of guards.

“Shoes off please miss.”  One guard said.  I slipped off my sandals and stepped into the throne room.  The Elf Prince was lounging in his throne.  He looked different than the others.  His face had a regal edge, his eyes were the color of emeralds and his hair was silvery blonde. He wore all black, contrasting with the pale of his hair and skin.  From across the room his eyes pierced mine.

“You’re looking for your mother.”  His voice was deep and musical.

“How did-” I stopped.  The Elves were masters at divination.  Of course he knew.  “Can you help me?”  I asked, walking up the lush carpet to the throne.

“Well will you?”   His green eyes watched me with detached amusement.  The Prince stood and strode towards me until we were practically nose to nose.  I looked up, his eyes sparkled as he leaned down and whispered into my ear.

Let us start with a disclaimer: I read very little fantasy. My interest in the genre is limited to the so-called horror sub-genre, and from there to Turkish and Spanish horror films (I’m not making a recommendation, by the way). So it is that when one mentions the word  “elf” I am generally not interested unless the name “Keebler” is in front of it.  I do know a bit about the contemporary popular fantasy genre, however, and have tried to base my critique on that knowledge. If anyone out there believes that I am too tough or flat out wrong in my First Page Critique of “The Elf Prince” by Anonymous du jour please step right up and say so.

That said, I felt while reading the first page of “The Elf Prince” as if I was in one of those westerns where the cowboy is riding a horse which is out of control, eventually causing the rider (me) to fall off with his foot caught in the stirrup, resulting in his being dragged along until he could bring the steed under control. I am aware that it is part and parcel of fantasy novels to drop the reader in medias res from the first page. When I did read fantasy, back in the day, books like Dune  and Lord Foul’s Bane did exactly that.  I didn’t feel dropped here so much, however, as I felt dragged at warp speed through a field of stones. What I think we’re looking for as readers is to be tugged into the narrative. Here, within the first page, the protagonist arrives in a different world/city populated by elves and within (apparently) seconds goes to the castle where she’s ushered in and given a ‘no” to her plea to help her find her mother before she even asks. Whoa!

My best advice — the short version — is to blow this first page up ( including the title)  and start over. It is what is known in the real estate business as a “tear down,” meaning that you’ve got a great lot but the old house on it does not pass building codes. It’s easier to tear it down and build a new house than to remodel it.

Let’s do that. After the dust settles and the smoke clears we’ve still got the land, and the idea for a story. I suggest, Anon, that you do the following:

Begin by naming things and people. Science fiction and fantasy authors love to come up with exotic titles and words.. Make a list of your characters and give them names. Do the same for the places. “The Elven City” doesn’t cut it. Give it a name. Do the same with the palace. If the palace has guards they’ve undoubtedly got some sort of military hierarchy with titles to match. Those two guys who brought the narrator in probably have a title, like “Garda” or something. Use it.. Give the prince a name, and his throne a name as well. You could make a game of it (…did I really say that?). And who is your narrator? You can drop that into the text quite easily (see below). Since the elves are so smart they’ll be greeting her by her name since they already know it, correct? And what do the Elves call themselves? Do the elves call themselves elves? Do they have different name for themselves? Do they have a term for human beings that can be used in polite company?  I suggest that you avoid calling them “elves” for a bit. You don’t have to explain what each term is; your readers should, if you’re doing your job, be able to pick it up in context. I’ll reference Dune. I had no idea who the Bene Gesserit was at first, but it all gradually became clear.

Next. I was very confused as to whether our narrator had been to the Elven City before. She seemed familiar with it, but she was describing the elves as if seeing them for the first time. Clear that up. A sentence will do it. One way would be “It looked the same as it did on my previous visits, (insert description of weather and streets here). Or, if it’s her first time, say so.

Also: as you tug us through the narrative give us more detail concerning what the narrator sees. Let her stop and smell the roses. What are the elves doing? Are they selling cookies from market stands or flying through the air on hoverboards? Are they tending to plants or crops? Are they playing with their children? Are they committing acts of mayhem or robbery? Tell us a bit more about what she sees. It will help you to “grow the book” and help your reader visual things as well.

Personal taste: I don’t like the mirror thing at all. How does one control it?The narrator mentions going to other places while using it, but I was wondering how she keeps from winding up in, say, Hammond, Indiana when she wants to go to Louisville, Kentucky, or finds herself in Columbus, Mississippi when she wanted to go to Columbus, Ohio. She might as well be flying. I think that this may be a problem later in your story, so I would solve it at the beginning by getting rid of it.

The narrator states that the elves have perfect eyes, perfect hair, and perfect bodies. What does that mean? Are they all five-feet seven, pleasingly plump and always wearing a winning smile? A term like “perfect” to describe someone can mean many things to many people. Maybe you could describe them as wonderfully crafted sculptures, come to life” in addition to the specific descriptions you do give. And use this as an opportunity to describe your narrator, and how her appearance compares and contrasts with the elves.

Proofread, and get someone else to look it over for you.  There is a grammatical error in the second sentence of the story (where did that “and” go between “alive’ and “was”?), a punctuation error in the seventh (common instead of a semi-colon), and they continue from there. You also use the word “everything” to begin two consecutive sentences. Use it in the first and combine the two sentences. And…if  your narrator and the prince are nose to nose, she doesn’t have to look up at him and he doesn’t need to lean down to whisper in her ear. I am not a proofreader; for every one I find in my own work a fifth grader can find six more. Check your work over as best you can and then get a proofreader to go over it again and again.

In closing, let me give you an example of some of the elements I’m discussing. There are any number of ways to begin this story, but try this on:

Prince Quaffa stared directly at me and said, “No, Sarah Quinn.”

I had come too far, and expended too much effort for too good a reason to hear a negative answer.I wasn’t going to be brushed off or refused by anyone, not even the royal  Johnny Winter lookalike who stood in front of me. Getting angry, however, wasn’t going to help. I checked myself, took a breath, and tried again. “Your Highness, the abilities of the Huldufolk —”

“Don’t. Call. Us. That.” Prince Quaffa didn’t raise his voice, but it  sounded as if it was coming from the bottom of a well.. His green eyes — so different from the sapphire color of his subjects — sparked with an anger that replaced the shine of aamusement they had exhibited a few seconds before. “We hate that term worse than ‘elf.’” He clenched his fist and struck his chest, whispering fiercely. “We are the Lowenpick, you stumpig!”

“We don’t like being called stumpig,” I replied, trying to keep my voice even.

What the foregoing does is hold the action in one place while telling you just a bit about two the characters and creating immediate conflict. You can spread outward from there. Let Sarah plead her case, and have Quaffa explain why he won’t help. After Sarah leaves Quaffa’s presence and walks through the city, have her describe it and the people a bit. Who knows, maybe she’ll encounter an el…er, member of the Lowenpick who will take pity on her and assist her, using those powers you hinted at in your original first page. Or not. I am sure that our readers will have other ideas and suggestions. Please check them all out, Anon, and take heart. Be not discouraged, but encouraged: continue telling your story. And thank you for submitting your first page to The Kill Zone.

Readers, what say you? I’ll be checking up on things throughout the day but will keep my comments to a minimum..