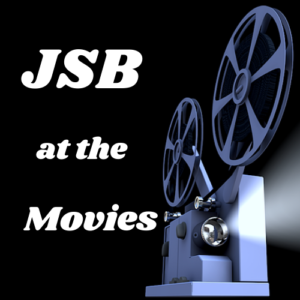 Today I begin an occasional feature—JSB at the Movies. I’m a lifelong movie fan, my B.A. is in Film Studies, and I often use movie clips in my craft workshops. The crossover between screen and page storytelling is substantial.

So let’s start with one of the best.

Frank Capra’s It’s A Wonderful Life was not always a beloved Christmas classic. That’s because it was rarely seen after its initial run in 1947. When movies started showing up on TV in the 50s, Wonderful Life was tangled up in issues over ownership and copyright. That cloud did not begin to dissipate until 1974, while I was a film student at U.C. Santa Barbara. That year the copyright owner, Republic Pictures, failed to renew (probably due to a clerical error) and the film fell into public domain. That’s when it started showing up on TV for new generations to embrace.

To celebrate the movie’s new life our film department arranged for a showing, with a special guest—Frank Capra himself.

Capra is one of my all-time favorite directors. So I wangled and cajoled my way into being named his chauffeur for the evening.

Not that it was a glamorous ride—it was in my scruffy, three-on-the tree Ford Maverick. But the greatest populist director, the champion of “the common man,” did not seem to mind at all getting ferried to the campus in a rattletrap student automobile.

Along the way I told him my two favorite movies of his were It Happened One Night and Mr. Smith Goes to Washington. I added that my dad was an extra in Mr. Smith. Capra told me of the cold reception that film received when it was shown in D.C. Apparently the senators did not take kindly to the way their chamber was depicted. (Sheesh, what would a Capra film do to them today?)

Campbell Hall, our big auditorium, was packed. I got to do the introduction. Mr. Capra made some opening remarks, and then we watched the movie.

It knocked me out. And, I daresay, had the same effect on most of the audience. We had just been gifted the magic of what critics called “the Capra Touch.” 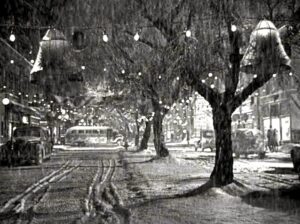 Wonderful Life begins and ends on the same Christmas Eve, in a town called Bedford Falls. It opens with shots of the snowy town, and the voices of various townspeople praying for a man named George Bailey. The last voice is the one we’ll come to know as Zuzu (George’s youngest child) pleading, “Please bring Daddy back!”

We then switch to the heavens, where angels (in the form of twinkling stars) talk about what do to answer these prayers. The assignment is give to an angel named Clarence who hopes to earn his wings.

The film switches to the linear story of George, from boyhood to the present. He’s a man with hopes and dreams who comes to think of himself as a failure; indeed, that it would be better for everyone if he were dead.

This is when Clarence the angel intervenes.

This film ends by returning to the frame—Christmas Eve—and George’s redemption. A bell on the Christmas tree rings. Zuzu announces, “Teacher says every time a bell rings an angel gets his wings.”

Heroes who are perfect are uninteresting. Deep down we don’t really buy it. That’s why your Lead should have flaws and foibles just like all of us. 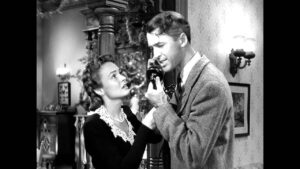 George Bailey (James Stewart) is a good man, a solid citizen, but is far from perfect. He’s not above leering at the attractive derrière of Violet Bick (Gloria Grahame) as she shimmies down the street. He loses his temper and becomes abusive. He verbally destroys the simple-minded Uncle Billy when the latter loses a crucial bank deposit. On Christmas Eve, his life at its lowest ebb, he screams over the phone at his child’s teacher, then yells at his children, bringing them to tears. (Stewart’s acting is brilliant throughout. He was suitably nominated for Best Actor, losing only because the equally brilliant Frederic March in The Best Years of Our Lives.)

Lesson: The imperfect Lead creates empathy. The key, however, is that he is aware of his flaws, and wants to overcome them, as George does. 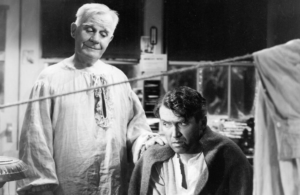 Every one of the secondary characters in Wonderful Life is well-drawn and engaging in their own right. Clarence the Angel (Henry Travers); Bert the cop (Ward Bond); Ernie the cab driver (Frank Faylen); the tragic Mr. Gower (H. B. Warner); all the way down to Zuzu (Karolyn Grimes, who is still with us). Old Man Potter (Lionel Barrymore) is a classic villain, and even his nonspeaking servant has an eerie presence.

Lesson: Give each of your supporting characters, even the minor ones, their own unique quirks and tags. These add “spice” to your stories, increasing reader enjoyment.

At the heart of the film is the love story of George and Mary (Donna Reed). When George’s brother, Harry, returns to town, married, George learns he’s been offered a great job by his father-in-law. Harry tells George he’ll keep his end of the bargain by running the Building and Loan so George can travel, but George knows the job is best for his brother and sister-in-law, and tells Harry to take it. 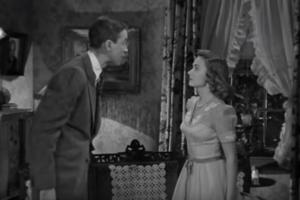 Which doesn’t help George’s frustration about staying in town. That evening he finds himself walking by Mary Hatch’s house. Mary, back in town from school, has been waiting for this moment. She has on her best dress and has set up the parlor to reveal a picture of a romantic moment from their high school days—when George said he would “lasso the moon” for Mary.

But that was then.

Now, as Mary does everything she can to rekindle the romance, George shoots her down at every turn. Finally Mary has had enough. She smashes the phonograph record of “Buffalo Gals” just as she receives a phone call from her suitor, Sam Wainwright. Sam asks to speak to George. He proceeds to offer George a “ground floor” position at his new plastics firm.

George pulls Mary to him in a fierce embrace. Love has conquered his rage.

Lesson: Readers love to read about love. But be it a romance plot or a romance subplot, the path of love must have obstacles. In a scene of high intensity, find a competing emotion that fights for supremacy inside the character.

There’s a perfect mirror moment in the middle of the film. George is forced to look at himself and choose what kind of man he’s going to be.

Old man Potter has been trying to take over—or ruin—the Bailey Building and Loan Company, so his firm will be the only one building homes for the community. But George has frustrated those plans. And while he’s now married with children, George is not rolling in dough like his friend Sam Wainwright (see above) who made a killing in plastics during the war.

Knowing this, Potter calls George in for a meeting and hands him a big, fat cigar. He starts with the flattery, then offers George a job—at ten times George’s current take-home! 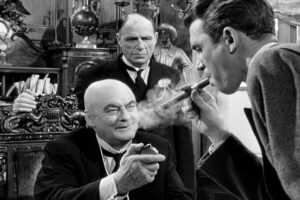 “You wouldn’t mind living in the nicest house in town,” Potter says, “buying your wife a lot of fine clothes, a couple of business trips to New York a year, maybe once in a while Europe. You wouldn’t mind that, would you, George?”

George is stunned. And tempted! To travel like that has been his dream. To have money to lavish on his wife, who has had to make the best of his meager salary, has always been his desire. He’s considering the offer when he asks what will become of the Building and Loan.

“Confound it, man, are you afraid of success?” Potter says. “I’m offering you a three-year contract at twenty-thousand dollars a year, starting today. Is it a deal or isn’t it?”

We read the conflict in George’s eyes. Who am I? he is thinking. What will happen if I take this offer?

He asks Potter for a day to think it over. Potter consents, tells George to go talk it over with his wife and meanwhile he’ll draw up the papers. He offers his hand.

The script describes what happens next: As they shake hands, George feels a physical revulsion. Potter’s hand feels like a cold mackerel to him. In that moment of physical contact he knows he could never be associated with this man. George drops his hand with a shudder. He peers intently into Potter’s face.

George says: “No…no…no…no, now wait a minute here! I don’t have to talk to anybody. I know right now, and the answer is no. NO! Doggone it!”

George has decided who he must be, but will that be enough to sustain him? That’s what the rest of the movie is about.

Lesson: At some point in your writing—the planning stage or at any point along the pantsing highway—brainstorm five possible deep questions your Lead can ask about himself. What is the central inner issue at this point in the story? You’ll often find that the third, fourth or fifth idea is the one that jumps out at you as original and on point. And that’s when you know what your story is really all about.

At the end of every great story is a transformation of the Lead. In this case, George is transformed from a bitter and discouraged man to one who has realized that his gift to the world has been right there in his little hometown. Because of his sacrifices and generosity, Bedford Falls is a lovely place to live, as opposed to the Pottersville of the alternate world (where George had never been born).

Note that this transformation is an answer to the question raised by the mirror moment.

And here’s a little technique that will add depth to all this: the argument against transformation.

That’s a beat early in Act 1 where the Lead makes a case for the opposite of the transformation. For example, Rick in Casablanca is transformed into a self-sacrificing hero at the end. So what does he say early on? “I stick my neck out for nobody.” 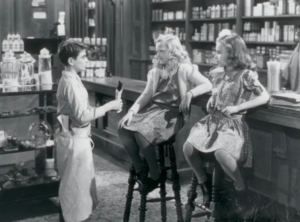 In Wonderful Life, George’s realization about his town’s love is argued against in Act 1. That’s when the young George Bailey tells the two girls, Mary and Violet, the following:

You don’t like coconuts! Say, brainless, don’t you know where coconuts come from. Lookit here – from Tahiti – Fiji Islands, the Coral Sea!
MARY: A new magazine! I never saw it before.
GEORGE: Of course you never. Only us explorers can get it. I’ve been nominated for membership in the National Geographic Society. I’m going out exploring some day, you watch. And I’m going to have a couple of harems, and maybe three or four wives. Wait and see.

Lesson: Once you know the transformation, give your Lead a line or two in Act 1 that is expressing the opposite view. The readers will experience a most satisfying character arc that way.

And that is why It’s a Wonderful Life is a classic of its time—and for all time.

This is JSB at the Movies, signing off.