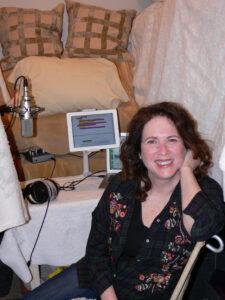 Gifts sometimes fall into my lap from benevolent angels who watch out for writers. During a book appearance last summer, good fortune smiled on me.

The venue was an outdoor bar/café on the shoreline of the Swan River in Bigfork, Montana.

About 30 people sat on socially-distanced lawn chairs, noshing, sipping, and soaking up sunshine while listening to me and three other authors chat about our books. For most of us, it was the first gathering since the pandemic began and everyone’s spirits were high.

Afterward a woman approached me and introduced herself as Eve Passeltiner, a stage actress who’d performed for years in New York and New England. She’d recently moved to Montana, had read my work, and said, “I’d like to narrate your books.”

Although I was flattered, I sidestepped. Readers often ask about audio versions but I wasn’t ready to take the plunge yet.

When we later met for coffee, I let her know my concerns but, bless Eve, she persisted. She had more faith in my books than I did and convinced me that an audiobook was worthwhile.

Market stats back her up and mirror the continued rise in audiobook popularity. According to a June, 2020 article in Publishers Weekly:

The Audio Publishers Association’s [APA] annual sales survey found that sales from 24 reporting companies rose 16% in 2019 over 2018, reaching $1.2 billion. The survey also found that unit sales increased by 16%. The gain in 2019 was the eighth consecutive year in which audiobook revenue rose by double digits, the APA said.

Another PW article about the 2020 online BookExpo stated:

APA retail member Chirp reported an initial dip in listening during commuting hours at the start of the lockdown, but it rebounded quickly as people discovered their new routines at home, and listenership has in fact increased to above the pre-shutdown level.

Authors need to put ourselves into the minds of our readers and figure out what they want.

Although I personally prefer written words over spoken ones, many book buyers choose to listen.

Eve convinced me I need to consider those buyers…and the sales I was missing.

During more coffee dates, I learned that Eve had been a flashlight-under-covers young reader who saved her babysitting money to buy books. Her early love of reading provides a solid grounding for audiobook creation.

In addition to performing and directing theatre, Eve is also an accomplished voice-over actor (video games, commercials and more). One of her most treasured projects was being the featured voice actor for the Washington Post’s Webby Award Honoree multimedia piece “The Women of Kabul” where she portrayed three different Afghan women, bringing each to life with a unique vocal quality and energy. 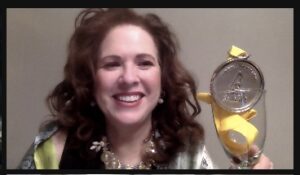 Eve Passeltiner with her Audie medal

In 2020, she was part of audiobooks that were nominated for awards including the Audie (the Oscars of the audiobook world) and an Independent Audiobook Award from the Audiobook Publishers Association (think Sundance Film Festival). She has also been reviewed in AudioFile Magazine, the source for everything audiobook.

Because Eve has traveled extensively, lived in big cities and small towns, and speaks several languages, she is skillful with accents and dialects (British, Irish, Scottish, Spanish, German, French, Russian, New York, Southern and more). She says, “Accents are a wonderful flavor that add to the work, but they shouldn’t overpower the storytelling.”

What is a day in the life of a narrator like?

Like most narrators, Eve wears several hats—researcher, actor, director, and engineer. Roughly half of Eve’s jobs come from publishers and half from indie authors. Although she does the initial engineering to record the book, publishers either have in-house staff or contract out the final editing, mastering, and proofing of the audiobook.

When I visited her home studio, it was a beautiful, carpeted, walk-in closet with a high ceiling. Eve says its unusual trapezoid shape is ideal because of the way sound waves move, making it preferable to a square room.

Hanging garments, covered with curtains, surround a desk with recording equipment. Eve says, “Clothing is a great sound dampener, along with the carpet.” Sound-absorbing pillows and blankets give the room a tranquil feeling. The studio is in the center of the house which acts as a natural barrier to noises from the outside world.

When recording, Eve turns off the furnace, leaves her phone in another part of the house, and shoos Marco the cat out of the bedroom.

“Narrators are always looking for the sweet spot in terms of hydration and eating,” Eve says. “I start drinking water hours before I record—but not too much. And, of course as far as food goes, I want to avoid stomach gurgles. It is amazing how many sounds the body can make once you tune in to them.”

Eve does extensive preparation before she even starts to record. She reads the book, maps the story, casts the characters in her mind, studies relationships, character and story arcs, and looks up unfamiliar words and locations. She does a lot of the same in-depth research that writers do.

One of her favorite tools is her iPad. From it, Eve creates the master document for performance and recording. Using a special application, she inserts character notes, differentiates narration from dialogue, and includes correct pronunciation of names, places, or foreign words. She adds either an audio clip with pronunciation or types out the phonetic spelling.

For example, the name Kahlil Sharivar is noted as Kaw-LEEL SHAH-ree-var. She’ll be saying that name a lot as she records Instrument of the Devil, the first thriller in my series.

In addition to the script on the iPad screen, she monitors another screen in her studio that displays Twisted Wave, an editing software program for audio. Punch and roll is the industry standard for recording long-form audio and allows her to re-record or make changes to the audio file. If Eve misspeaks, coughs, or hears a car drag-racing in the distance, she can go back, reset the cursor, and start recording again. This allows for a seamless wave file that is ideal for editing, mastering, and proofing once the book is recorded.

On the tech equipment side, Eve is a big fan of Audio-Technica AT4047 microphones (she has two, one as a backup) because it perfectly matches her rich alto voice. Her Beyerdynamic headphones are easy (literally) on the ears and her pre-amp (a magic box that is a conduit between mic and computer) is an Audient iD4.

She prefers to sit when recording because it gives a more intimate feel, like telling a story to a good friend over coffee. Sessions last between 45-90 minutes, usually to the end of a chapter. During breaks, she stretches and uses a foam roller for massage. Then it’s back to the studio.

Similar to acting, the narrator “lives” in the world the author created. She must get to know characters well enough to portray them with convincing, engaging voices. To differentiate the sound of a character, she uses pitch, speed, and even body placement to create an individual voice. To indicate internal thoughts, she may change her tone or volume.

My Tawny Lindholm Thrillers are set in northwest Montana where both Eve and I live. To further capture the story mood, Eve went the extra mile, checking out locations in the series, including the classic Craftsman bungalow that I’d used as a model for Tawny’s home and Hungry Horse Dam, the scene of the climax in the first book.

As a self-described “student of humanity,” Eve travels extensively and has a lifelong love of learning. New experiences help her relate to characters and make them feel more real.

Eve performs in three dimensions as if she’s on stage. Her body position and facial expression reflect what’s happening in a scene, whether she arches her back or hunches over, is wide-eyed or squints, etc. She says, “Stage actors make great narrators because they have endurance and know how to inhabit the character.”

During one of our visits, I saw firsthand how convincingly Eve inhabits a character.

The male lead in my series is a brilliant, intimidating lawyer named Tillman Rosenbaum who’s 6’7”, with a James Earl Jones voice, and an intense, dark stare that skewers his opponents.

How the heck could this pretty, petite, blue-eyed woman pull that off?

At the time, she was reading the second book in the series, Stalking Midas. She mentioned how much she liked my female lead, Tawny, and hated to see her suffer.

I made the smartass crack, “Wait until you read the later books where I really beat her up.”

Eve’s entire demeanor changed. In a flash, she grew larger and imposing. She leaned toward me and pierced me with a stare that was so threatening, it sent a shiver up my neck.

She became Tillman—a man who would kill to protect his beloved Tawny.

At that moment, any doubts I’d had about Eve’s ability to capture Tillman  evaporated. Now we joke often about the “Tillman Stare.”

Hearing my book for the first time is an author’s milestone that feels much the same as the first time holding the physical copy of my published books.

I didn’t go in search of an audio narrator but, by good fortune, I found one. Eve is not only hard-working and talented but is also a genuinely nice person who’s become a good friend.

How did I get so lucky?

TKZers: Do you listen to audiobooks? What do you like most about them? What, if anything, do you dislike?

Any authors with audio versions, please chime in with your experiences.

Stay tuned for the launch of the audio version of Instrument of the Devil. 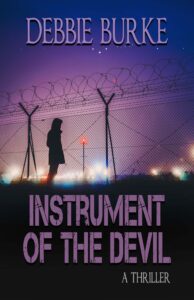 Meanwhile you can read ebooks or paperbacks in the series, Tawny Lindholm Thrillers with a Heart…and Sass.

For sale at Amazon and online retailers.